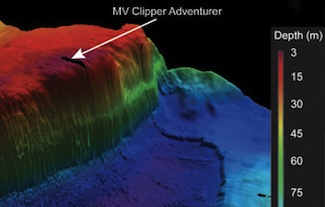 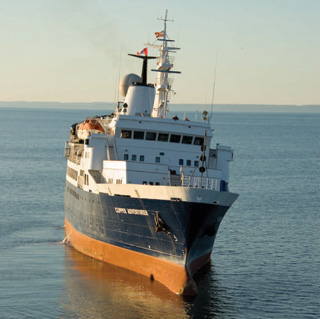 The Clipper Adventurer cruise ship ran into a known hazard in the Coronation Gulf off Nunavut on Aug. 27, a mapping expert from the University of New Brunswick said Sept. 3 in a news release.

“The cruise ship effectively ran into an underwater cliff,” John Hughes Clarke, head of the UNB’s ocean mapping group said in a Sept. 3 news release from the university. “Had they been just a few ship lengths to the east or west they would have missed it.”

Hughes Clarke said that, contrary to earlier reports, the location of the rock the cruise ship ran aground on about 100 kilometres east of Kugluktuk has been known since 2007, when the the Canadian Hydrographic Service informed the shipping industry.

The supposedly “uncharted rock” that the ship hit had been reported by the Canadian Hydrographic Service and in a Notice to Shipping issued by the Coast Guard in 2007 which states:

It is the responsibility of the chart retailers and ship’s officers to update their charts and note these hazards when they are issued.

This is even more important because many cruise ships are heading into riskier areas, Hughes Clarke said.

“The problem is, cruise ships want to go off the safe shipping lanes where there is more dramatic topography or stunning wildlife,” he said.

Researchers on board the Amundsen, who are part of UNB’s ocean mapping group, also helped map a safe course for the Amundsen, which was the closest vessel to the Clipper Adventurer, marooned near Port Epworth in the Coronation Gulf.

The Amundsen had to sail more than 500 kilometres from the Beaufort Sea to reach the cruise ship.

The UNB researchers had to make sure the Amundsen didn’t meet the same fate, says the news release.

The Clipper Adventurer‘s hull suffered serious damage and many watertight compartments were ruptured, although the ship’s interior is apparently not taking in water, a source told Nunatsiaq News.

Doug Cartwright and Ian Church, the UNB mapping researchers on board the Amundsen, used the ship’s multi-beam sonar system to survey the seabed along the approach to the damaged ship.

When the Amundsen got closer, the researchers used a smaller multi-beam sonar system on its barge to safely guide the icebreaker.

Church also did a three-dimensional survey of the area immediately around the grounded cruise ship using the barge.

The surveys done by the UNB researchers are now being used by other Coast Guard ships assisting with the recovery of the Clipper Adventurer.

The Ocean Mapping Group has processed and handed over all survey information pertaining to the grounding to the Canadian Hydrographic Service.