After 14 years, no closure on brother’s death, Nunavik woman says

“It’s always been a question of how did he die?” 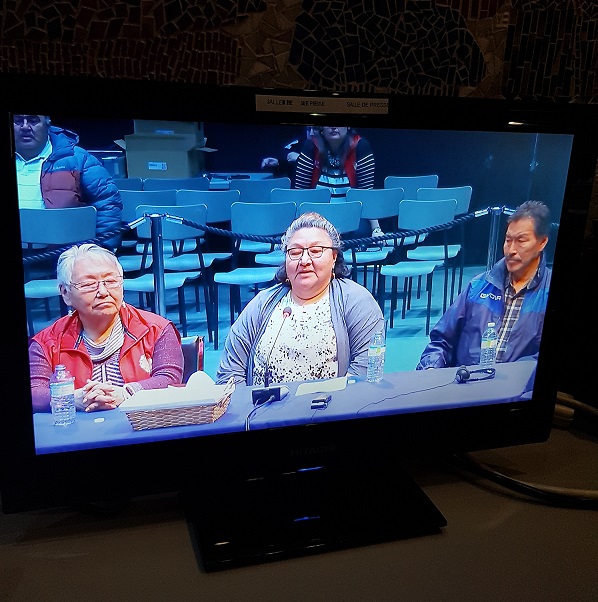 Rhoda Ezekiel, centre, appears on a television outside the room where she was testifying on Nov. 20 before the Viens commission about her brother’s 2004 death. No photography is allowed in the room where the hearing is taking place. (PHOTO BY SARAH ROGERS)

KUUJJUAQ—A Nunavik family still wonders what happened to their brother, who went missing and died 14 years ago.

Rhoda Ezekiel of Quaqtaq testified at the Viens commission on Tuesday, Nov. 20, telling the Quebec inquiry about the 2004 death of her youngest brother, Johnny Aloupa.

“It’s always been a question of how did he die?” Ezekiel told the hearing.

Aloupa was epileptic and suffered grand mal seizures, which could hospitalize him. When that happened in the summer of 2004, Aloupa, 32, was medevaced to Kuujjuaq—the last time many of his family members saw him.

Ezekiel told the hearing that Aloupa remained in Kuujjuaq for a few weeks recovering under the care of social services.

A musician, Ezekiel travelled to Kuujjuaq in mid-August to perform at the annual Aqpik Jam. It coincided with the time her brother was set to be moved to a rehabilitation centre in Inukjuak.

Aloupa’s family was told he checked into his flight to Inukjuak one day in August, but he never made it there.

By early September, when Aloupa’s siblings hadn’t heard news from him, they made some calls to try and track him down. His body was discovered on Sept. 10, 2004, in Kuujjuaq.

“We want to know why it took so long to inform us of his disappearance,” Ezekiel said.

It’s unclear when Aloupa went missing, but authorities told the family at the time that his body had been partially eaten by stray dogs, suggesting he may have been outdoors for a long period.

Ezekiel said the family wrote to the Kativik Regional Police Force at the time to ask for more information or a more thorough investigation into Aloupa’s death, but never heard back.

There is no coroner’s report available.

Family members have pieced together the last days of Aloupa’s life and estimated that he went missing in early September of 2004 and died around Sept. 6.

Ezekiel said she believes he likely had a seizure while he was out and no one was nearby to intervene.

But to this day, Ezekiel said Aloupa’s death is difficult to talk about, especially without knowing the details.

“He was only 32 years old at the time,” Justice Jacques Viens responded to Ezekiel’s testimony. “He was very young—too young to die.”

Another Quaqtaq resident, Johnny Oovaut, a former police officer and mayor of the Ungava coast community, told the hearings on Nov. 20 of an incident that he said invaded his family’s personal space.

In 2016, Oovaut said social workers were responding to a threatening note penned by a group of students, while his 17-year-old daughter was at home alone.

While Oovaut was at work, a social worker entered his home to question the teenager, without permission or any court order.

He received a frantic call from his daughter that the social worker had walked right into the house and into the teen’s bedroom.

Oovaut returned home right away to find a police officer on the front porch of his home.

“There was no need for the intervention,” he told the commission. “I wasn’t too happy with that, because I know my rights. It felt like I was being seen naked by someone who I didn’t give permission to.”

Oovaut said it was just one of many instances where Inuit have seen their private space violated.

“It showed a very high lack of respect for me, for my daughter, for my people,” he told the commission.

“Unfortunately, we’re used to it.”

The Viens commission’s final week of hearings continues in Kuujjuaq until Nov. 23.