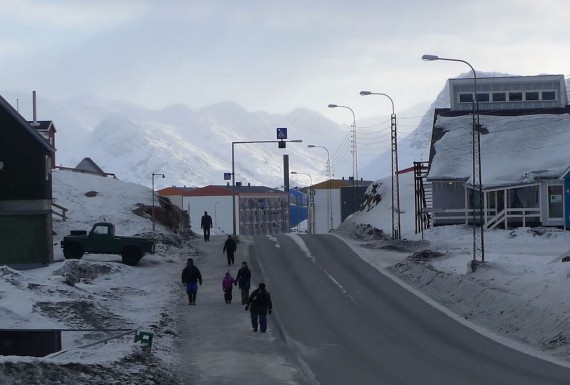 Today, the majority of Greenland’s residents speak a form of Greenlandic, although it is less necessary in larger towns, such as Sisimiut, pictured here. (PHOTO COURTESY OF KEVIN MCGWIN/ARCTIC TODAY)

A single sentence in the agreement struck by the four parties making up Greenland’s new coalition government is threatening to sour the relationship between Nuuk and Copenhagen.

The four political parties, two of which favour quick independence from Denmark, declare as one their first orders of business in the 40-page document that will guide their work for the next four years, that they will “work towards making the English language our country’s first second language.”

Although Greenlandic became Greenland’s sole official language in 2009, Danish remains essential in wide swathes of government and commerce, as well as in the educational sector.

That, despite more than half of Greenland’s population speaking a form of Greenlandic as their first language.

Proponents of flip-flopping the status of English and Danish, spoken by five million people in Denmark, but understood throughout Scandinavia, argue that doing so gives Greenlanders more educational and work options.

However, during questions in the national assembly in Copenhagen Tuesday, Prime Minister Lars Løkke Rasmussen lashed out at the new Nuuk government for closing the door on educational opportunities in Denmark, which are offered free to Greenlanders.

“Denmark is open, wide open, for all young people from Greenland who want to make something of their lives. But, in order to be able to do take that step, they must be able to speak Danish,” he said.

Rasmussen and other opponents of lowering the status of Danish also argue that doing so would erode the cultural bonds that keep the Kingdom of Denmark together.

In their agreement, the four parties argue that making English the first foreign language pupils are introduced to — as is the case in Denmark — is “natural” given Greenland’s increasing internationalization.

While Greenlandic is the primary language of instruction throughout primary school, pupils in Greenland are typically introduced to Danish in their first year. The number of classes taught in Danish increase each year, and by, secondary school, all instruction is in Danish.

English instruction is mandatory from around age 10 but suffers from a lack of qualified teachers, a fact that both sides of the language debate are concerned about.

Pupils are also encouraged to learn a fourth language. And despite the government seeking to elevate the status of English at the cost of Danish, it also recognizes the need to improve pupils’ acquisition of all three languages.

This article is reproduced with permission from Arctic Today, where it originally appeared on May 9.