After 30 years, no justice for Iqaluit’s Mary Ann Birmingham 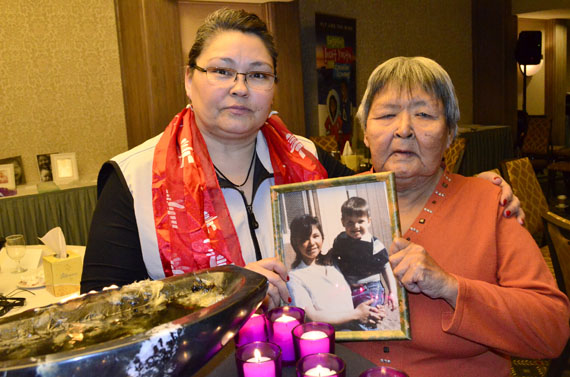 After 30 years, a daughter and her mother still long for justice. Barbara Sevigny (left) sister of the late Mary Ann Birmingham of Iqaluit, with her mother, Sarah Birmingham, hold a photo of Mary Ann and Martha’s little son, the late Lyta Birmingham, made prior to 15-year-old Mary Ann’s brutal murder on May 26, 1986 in Iqaluit. The death, still unsolved, occurred when Sarah had taken Lyta to Montreal to be treated for leukemia. Sevigny said she hopes publishing the photo may trigger someone’s memory and lead to evidence that could see the perpetrator brought to justice. This photo was taken Feb. 12, at the end of an emotionally draining consultation meeting that Pauktuutit held over four days in Ottawa last week. At the end of the gathering, members of Inuit families whose girls and women were taken in crimes of violence lit a display of candles in memory of their lost loved ones. (PHOTO BY JIM BELL)

OTTAWA — One dark week nearly 30 years ago, an icy fear kept the people of Iqaluit locked in its grip, followed by an inconsolable grief that has never quite lifted.

On May 26, 1986, Mary Ann Birmingham, 15, died at the hands of an unknown assailant who stabbed and mutilated her inside her family’s housing unit near the beach.

She’s one of the nearly 1,200 missing and murdered Indigenous women and girls whose deaths and unexplained disappearances have provoked a Canada-wide demand for the national MMIW inquiry that the federal government is now preparing for.

It was Mary Ann’s sister, Barbara Sevigny, now a counsellor with the Tungasuvvingat Inuit organization in Ottawa, who found Mary Ann Birmingham’s body, some days after the teens’s death.

Sevigny had flown back that day from Montreal, where her mother, Sarah Birmingham, had taken her little brother, the late Lyta Birmingham, to be treated for leukemia.

“I know now that I was in shock. But the RCMP officer I talked to at the station was very good at helping me out of it and getting me to talk,” said Barbara Sevigny, who later became a trauma and grief counselor.

Police, however, were not able to solve the crime. Through the spring and summer of 1986, many Iqaluit residents were haunted by the knowledge that a brutal killer was likely still at large.

The late Fred Coman and the late Lionel Jones, along with other benefactors, put a up a $10,000 reward for information that could solve Mary Ann’s murder.

For many months, Nunatsiaq News donated space every week to advertise the reward — but police could not find enough evidence to identify the killer and lay a charge.

Police arrested and charged him the next morning. Because the apparent facts were so similar, many Iqaluit residents believed Atsiqtaq was responsible also for the death of Mary Ann Birmingham.

For that reason, Justice David Marshall of the Supreme Court of the Northwest Territories decided that, to give Atsiqtaq a fair trial, a 12-person jury be chosen in Rankin Inlet and flown to Iqaluit.

Marshall sentenced him to life in prison, with no eligibility for parole for 10 years. Atsiqtaq has never received parole and still serves out his sentence at a federal penitentiary.

In a letter to Nunatsiaq News that was never published, but shared with the court and admitted as evidence at trial, Atsiqtaq apologized for killing the mother and son, but emphatically denied any responsibility for Mary Ann’s death.

Police later charged him with that crime, but after a preliminary inquiry, a territorial court judge found insufficient evidence to send him to trial.

And so the mystery persists. But Barbara Sevigny and other family members, such as Iqaluit’s former mayor, Elisapee Sheutiapik, who has spoken about her sister’s murder many times, still hope the perpetrator will be brought to justice.

“We’re hoping if you print the picture of us, it might trigger somebody’s memory,” Sevigny told Nunatsiaq News this past Friday.

Meanwhile, Sevigny put her counselling skills to good use last week at an MMIW inquiry consultation organized in Ottawa by Pauktuutit, the national Inuit women’s association.

She spent much of her time offering advice and comfort to other members of Inuit families whose daughters, sisters, mothers and cousins have been taken from them by crimes of violence.

That meeting produced numerous recommendations aimed at ensuring the national inquiry acknowledges the specific needs of Inuit, as well as a proposed strategic plan for Inuit violence prevention and healing.

On Feb. 15, Carolyn Bennett, the Indigenous and northern affairs minister, will host the last of her series of consultation meetings on the design of her government’s upcoming MMIW inquiry, at the Marriott hotel in downtown Ottawa.

And at the end of February, the Government of Manitoba will host the second national roundtable on the issue in an event that will bring provincial and territorial officials together with leaders of Canada’s national Indigenous organizations.

“We are not alone as survivors,” Sevigny said.