After MTS cancels barge, airlift to western Nunavut still in the works: GNWT 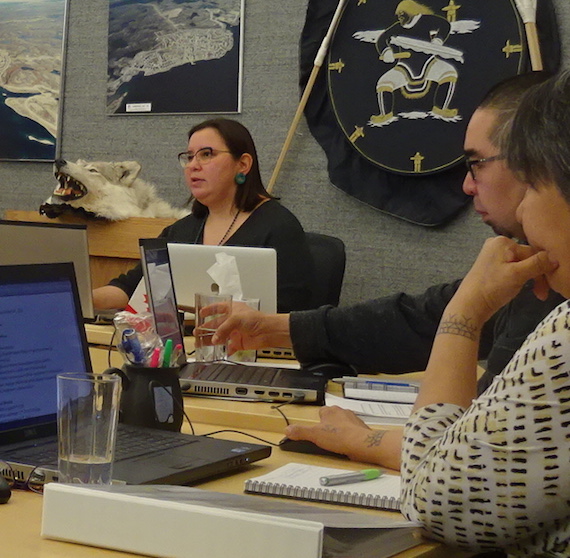 Cambridge Bay’s mayor, Pamela Gross, talks to officials in Yellowknife during a teleconference about the MTS barge that was cancelled on Oct. 1. (PHOTO BY JANE GEORGE)

Local businessman Stuart Rostant speaks Oct. 10 during a teleconference held in the Cambridge Bay hamlet chambers to discuss the recent cancellation of a MTS barge. (PHOTO BY JANE GEORGE)

CAMBRIDGE BAY—It was probably a good thing that discussions held Wednesday evening about the recently cancelled barge into Cambridge Bay unfolded via teleconference—and not during the planned, but cancelled, public meeting in Cambridge Bay that night.

Those in the hamlet council chambers often grimaced, smirked or rolled their eyes in response to explanations from those in Yellowknife about why the last Marine Transportation Services barge into this western Nunavut community was cancelled and exactly what the Government of the Northwest Territories, which owns MTS, plans to do about that.

The “idea,” according to the GNWT, is still to airlift thousands of tonnes of cargo, now sitting in heated storage in Inuvik, to Cambridge Bay. This plan was hatched late last week after outrage over the cancellation grew in this community of roughly 1,900.

The GNWT officials on the line said they would hear back on Thursday from various airline companies on bids to fly everything in. But they weren’t ready to provide more information about their request for proposal, including exactly how and when the 30-plus vehicles bound for Cambridge Bay—some stuffed with groceries—and the numerous other items, such as construction materials, would be flown in.

John Vandenberg, the GNWT’s assistant deputy minister for infrastructure, told those in Cambridge Bay that they’re waiting until the tender is accepted before they say more.

Calling it “an evolving situation,” Kelley Ryder, the senior communications officer for the Department of Infrastructure, said that she couldn’t provide all the answers.

“Let’s let the process work itself out over the next couple of days,” she said.

Responding to questions about the planned airlift, Derrick Briggs, the director of MTS, also on the line, said competing sealift companies wouldn’t “fly in a stick” in similar circumstances.

The teleconference took place after a public meeting scheduled for Wednesday night in Cambridge Bay was cancelled midday and tentatively moved to next Monday.

A meeting between MTS, the GNWT and the Hamlet of Kugluktuk is set for today to discuss the shipments that the community of about 1,500 hasn’t seen either, due to the cancelled barge.

Many of Cambridge Bay’s councillors wanted to know why MTS had cancelled the barge in the first place.

It was “act of God,” said Briggs, who repeatedly said how it was ice that caused the cancellation of the barge. As of Oct. 1, the Canadian Coast Guard was unwilling to provide the Louis St.-Laurent icebreaker as an escort to the barges due to the “arduous ice situation,” he said.

Briggs said that the ice was the worst seen in 30 years.

Councillors challenged his explanation about ice, citing earlier delays in the arrival date of the barge, which was supposed to arrive in August.

Several suggested that the barge should have gone to Cambridge Bay, the furthest point west, first, and they asked to see the MTS schedule of where and when the company had sent barges to in Alaska, the N.W.T. and Nunavut.

Those in the council chambers also included representatives from businesses and affected individuals who have formed a group to respond to the MTS barge’s cancellation.

Speaking after the call, contractor Peter Laube, owner of Kalvik Enterprises Inc. which is out about $350,000 in lost work and supplies, told Nunatsiaq News that the decision to not bring the barge to Cambridge Bay was due “an act of idiots”—not God.

Some of the most silent, pained responses during the teleconference came when the GNWT’s Vandenberg praised the experience of current MTS employees who had previously been with Northern Transportation Co. Ltd., whose assets the GNWT bought for $7.5 million in 2016.

Before going bankrupt, NTCL had previously cancelled a barge in 2014 to Cambridge Bay, also claiming a lack of safe passage.

The call featured much discussion of “frustrated cargo,” a term for the cargo left behind, which for the hamlet includes water, sewage and garbage trucks and 11 pallets of chlorine, which Mayor Pamela Gross said they need to ensure the health and well-being of the community.

The GNWT wouldn’t comment on the prospect of compensation for the hamlet or those businesses and people in town who have lost money and suffered inconveniences due to the cancelled barge.

These issues were also raised at a recent meeting organized by the Kitikmeot Chamber of Commerce in Cambridge Bay.

After the meeting Laube and others said they had no more answers to their questions than when they came in.

Laube said he felt they were stalling on responding to avoid legal action.

Gross invited the GNWT minister of infrastructure to attend next week’s public meeting in Cambridge Bay.

“I hope Monday is a good meeting,” she said later.