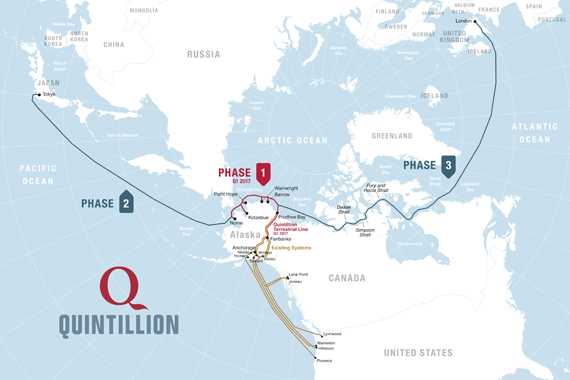 This map shows Quintillion’s future plans to lay fibre optic through the Northwest Passage, phase three of its subsea network. The company hasn’t put a timelines on the Canadian Arctic segment of the project. (IMAGE COURTESY OF QUINTILLION) 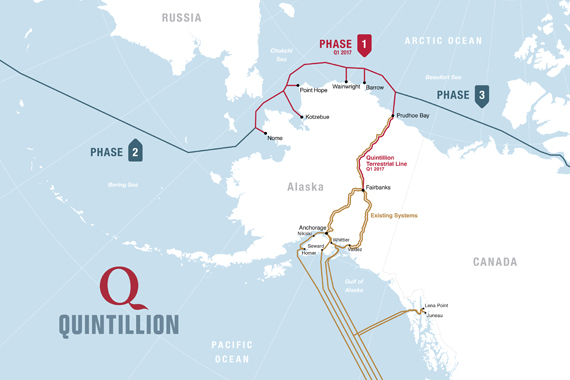 This map shows the first phase of the fibre optic network, currently under construction, which will connect six Alaskan communities to the network. (IMAGE COURTESY OF QUINTILLION)

Plans for a fibre optic network through the Canadian Arctic are still on the table, but Nunavut communities shouldn’t expect the project to deliver better bandwidth anytime soon.

Arctic Fibre, the Ontario company that first launched plans to build a network connecting Asia to Europe via the Northwest Passage — connecting Nunavut communities along the way — has been acquired by another telecommunications firm, Quintillion Subsea Holdings, that company said May 18.

The Anchorage, Alaska-based Quintillion still plans to build and operate the same fibre optic network through the Northwest Passage.

But the company is now focused on its first phase, the Alaska segment of the project, with the segment through the Canadian Arctic listed as a distant phase three.

Arctic Fibre had partnered with Quintillion, first joining forces with the Alaskan firm in early 2013, when the Canadian company extended its network plans to link to Alaska communities.

With the new acquisition, Arctic Fibre’s CEO, Michael Cunningham, now sits on Quintillion’s board of directors, the company said.

Quintillion says it’s in the process of constructing and installing 1,850 kilometres of subsea fibre optic, which will run from the community of Prudhoe Bay to Nome, with spurs to four other coastal communities.

The new cable system is expected to be delivering bandwidth to those communities by early 2017, Quintillion said.

A new terrestrial cable will also be installed from Prudhoe Bay to Fairbanks, Alaska, which will serve as the link between continental United States and the Arctic.

Quintillion says phase two of the project will target the Pacific, running west from Nome to Japan.

The project’s third phase will expand off the subsea system at Prudhoe Bay, running east through the Northwest Passage, south of Greenland, across the Atlantic Ocean to the United Kingdom.

The company says it will run spurs into select communities in the Canadian Arctic, but has yet to say which ones.

Under Arctic Fibre’s original plan, spurs would connect to Cambridge Bay, Gjoa Haven, Taloyoak, Igloolik, Hall Beach, Cape Dorset and Iqaluit. The company had also been in talks with the Kativik Regional Government about connecting to Nunavik.

In 2014, the Nunavut Impact Review Board screened the project, giving it the go-ahead to proceed without an environmental hearing, so long as it followed a number of conditions.

But the project sputtered out in 2015, apparently due to a glitch in securing the $620 million in private financing. Arctic Fibre announced it would instead focus on the Alaska segment, where its primary market is based.

Quintillion has not said what the project is estimated to cost at this point.