Up to $3 million to be given away this year 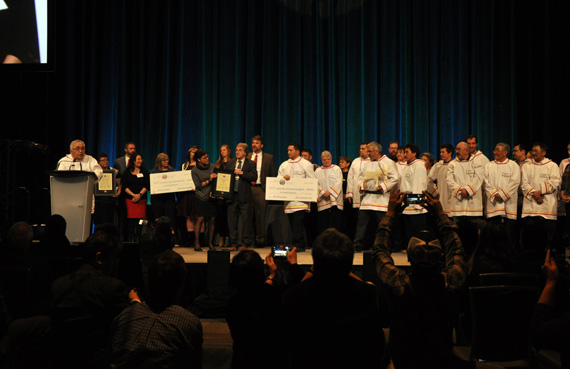 The Arctic Inspiration Prize is once again looking to give away up to $3 million to help fund innovative projects to improve life in the Canadian North.

The top prize this year could be worth up to $1 million, while up to four teams could receive $500,000 each.

As well, a youth prize category, first offered last year, will offer up to $100,000 to seven teams, which must be made up of members under 30 years of age.

The annual prize, established in 2012, aims to fund innovative projects that address “the causes rather than the symptoms of issues of importance to the Canadian Arctic and its peoples.”

Last year the prize handed out $2.4 million to a variety of groups. The top $1-million prize went towards the Arctic Indigenous Wellness Project, an urban land-based healing project that is trying to improve the mental health of Indigenous residents in the Northwest Territories.

One Nunavut project received $160,000 to help bring together elders and youth in Chesterfield Inlet to ensure the next generation learns how to build and paddle traditional qajaqs.

In Nunavik, the Unaaq Men’s Association of Inukjuak received $500,000 to pair youth with elders and experienced hunters, to help promote self-esteem, leadership and pride.

And one youth project that received prize money last year was the Rankin Rock Hockey Camp, which received $80,000 to expand its program, which it says helps create young role models and promotes healthy lifestyles, to also include Baker Lake and Arviat.

Optional letters of intent are due on July 9. Submissions of nomination packages are due on October 15.