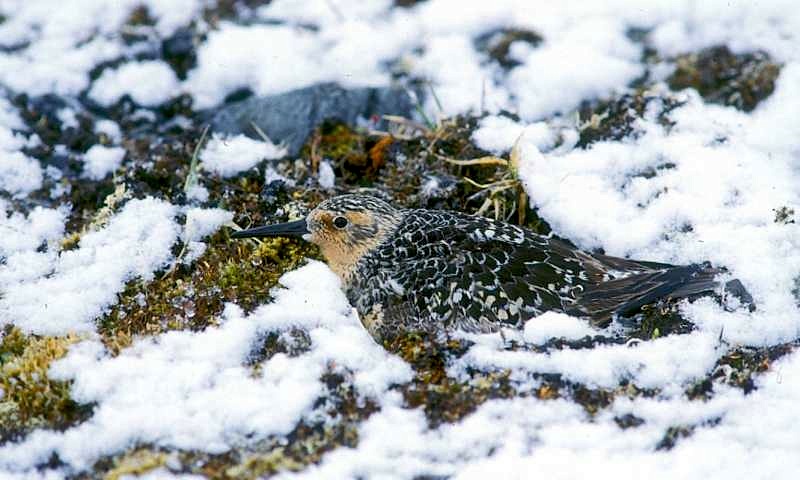 Red knots used to incubate their eggs in the Arctic snow in order to optimally time the hatch date of their chicks relative to the insect food peak. Nowadays, red knots have a hard time keeping pace with the rapidly advancing onset of Arctic summer. (PHOTO BY JAN VAN DE KAM) 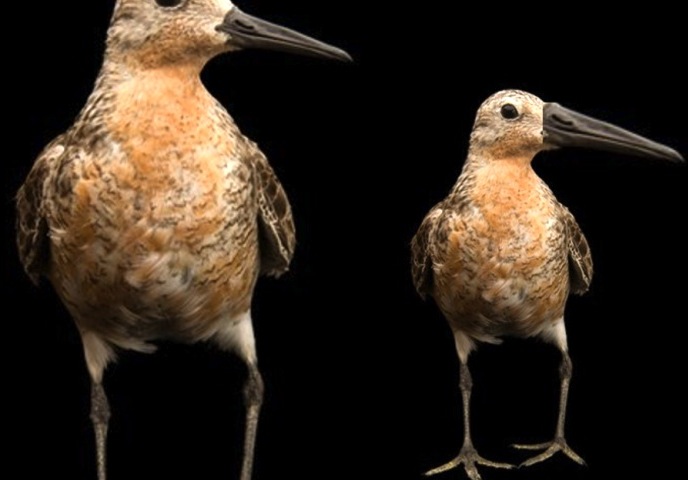 The red knot as it is now (left) and an (exaggerated) projection how the future red knot might look like (right): smaller, but having maintained its relatively long bill. Red knots are smaller, but since the short-billed small birds are selected against, the ones with the highest survival chances are relatively long-billed. (PHOTO BY JAN VAN GILS)

Red knots used to incubate their eggs in the Arctic snow in order to time the hatch date of their chicks to the insect peak.

But red knots now have a hard time keeping pace with the rapid onset of the Arctic summer. The young chicks hatch after the insects reach their peak, so the tiny shorebirds don’t get enough to eat and are getting even smaller as a result, say a team of researchers from the Netherlands.

“Body shrinkage due to Arctic warming reduces red knot fitness in tropical wintering range” is the title of their new research published May 13 in the online journal, Science.

“Reductions in body size are increasingly being identified as a response to climate warming. Here we present evidence for a case of such body shrinkage, potentially due to malnutrition in early life,” the researchers say.

The real problem with the timing of the red knots’ hatching and the impact of their diet on their size shows up when they reach their wintering grounds in the tropics.

Over the past 20 years some populations of red knots, circumpolar breeders with six separate populations, has declined by more than 80 per cent.

The European race, C. canutus islandica, winters in Great Britain and the coast of France, and breeds in Greenland and the extreme north of Nunavut, Devon Island, Ellesmere Island and have also been seen in Arctic Bay.

That red knot logs thousands of kilometres a year, from their breeding grounds in the High Arctic to the tip of South America where they winter.

Other red knots (C, canutus canutus) migrate between their breeding grounds in northern Russia and wintering grounds in West Africa — and that’s where scientists noted that the size of chicks and their bills has an impact on the birds’ survival.

They’ve seen that chicks born under rapidly warming conditions are smaller in size, with shorter bills, because they miss the insect peak when they hatch.

But, when — or if — the young red polls reach their wintering grounds in the tropics, they are faced with a second disadvantage: their shorter bills cannot reach their favourite shellfish food.

So the shorter-billed birds are forced to live on sea grass, which is a poor food source for these birds, the researchers say.

“The real toll of this change appears not in the rapidly changing northern part of their range but in the apparently more stable tropical wintering range.

“We therefore propose that changes in body size and shape, and the negative population dynamical consequences, will be widespread among other High Arctic breeding species in the future. This is a very serious ecological effect that requires our immediate attention.”