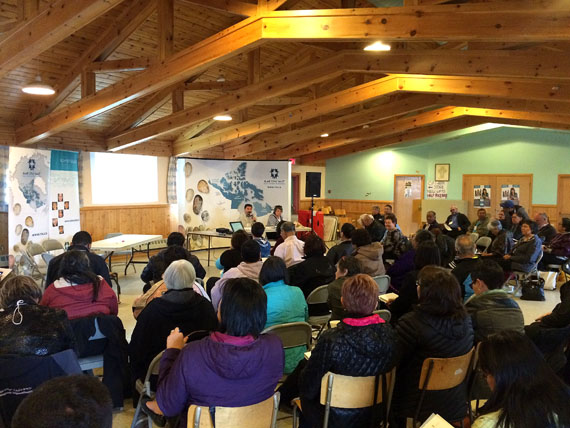 Delegates from around the Arctic at the Anglican Parish Hall in Iqaluit, where Inuit Tapiriit Kanatami is holding a summit on creating a standardized writing system across all Inuit regions for the Inuit language. (PHOTO BY STEVE DUCHARME)

The future of the written Inuit language, existing now in a variety of forms across Canada, is to be discussed and debated over the coming days in Iqaluit to create the framework for a new, standardized, written form of Inuktut for all Inuit in Canada.

About 60 people from around the circumpolar world attended the opening day of a summit entitled “Unification of the Inuit Language Writing System,” hosted by Inuit Tapiriit Kanatami and the Atausiq Inuktut Titirausiq task group Aug. 25 at the Anglican Parish Hall in Iqaluit.

The goal will be to draft a series of recommendations by the conclusion of the summit, which continues Aug. 26.

“Our children and grandchildren are going to be taught in a language that’s stronger,” said Mary Wilman, the mayor of Iqaluit, in her opening remarks.

Mary Simon, a former ITK president, Arctic ambassador and panelist at the summit, believes the benefits of a unified writing system will preserve Inuit culture against erosion from modern technology and communication that is done predominantly in English.

“We need to consider what we are trying to achieve with the young people, using the Internet and social media,” said Simon. “They speak Inuktitut, but write in English.”

“Although our language is alive we need to utilize it through computers, we need to think about that.”

The younger generation will be the main focus of the ITK summit.

But a great divide exists between older and younger Inuit on the need for a unified written language — one whose final form may abandon the syllabic system used in the eastern Arctic for the Roman alphabet.

The AIT Task Group was responsible for gauging support among Inuktut-speakers across Canada and delivered their report Monday morning.

The group acknowledged that older generations of Inuit are resistant to changes in the status quo.

Many Inuit over 50 indicated they do not want to see a new writing system, while others believe more focus should be made in revitalizing spoken Inuktut.

The fact remains that a growing number of young Inuit do not speak their native language, and many among the most fluent generations are passing away.

The majority of young Inuit questioned by the AIT are in support of change, and believe it would help regions where loss of language is growing.

Teachers also support the initiative in the hope it would allow for better sharing of resources, especially in remote areas.

Ultimately, the implementation of any new language standard will rest with them.

“The new system will be introduced through education, from kindergarten to high school,” said Jeela Palluq-Cloutier of the AIT Task Group. “The effects will not be immediately felt [by older generations].”

The workshops among visiting Inuit representatives are not open to the public, but the summit will host lectures and speeches from experts across Canada, speaking on a variety of topics analyzing the importance of a unified language and the historical success of similar initiatives in Greenland.