Calls are up: Nunavut’s capital to get three more police officers 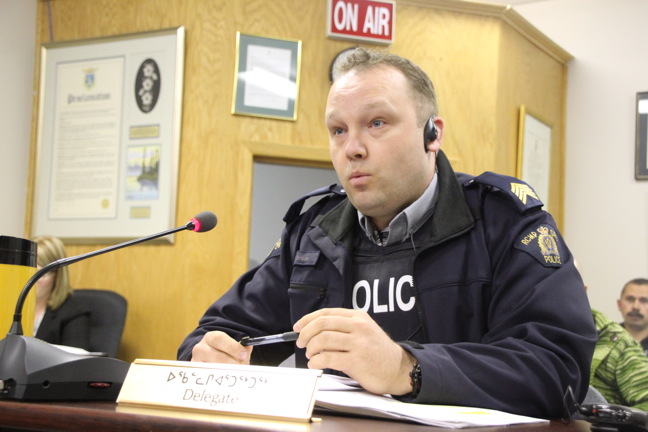 Break and enters could spike with the change in season St.-Sgt. Matco Sirotic says June 13 during a police report to Iqaluit City Council. (PHOTO BY BETH BROWN)

The city wants to see more of the RCMP, literally—with walking patrols around the beach in summer and more regular attendance at Iqaluit city council meetings.

“Everywhere else in the country positions are going down. We are seeing more resources thrown at us that way,” he said.

But the increase is more related to crime stats than it is to community policing programs.

In a city and territory that has what Sirotic called a “high crime severity index,” he said the majority of detachment time is spent responding to calls for issues such as assault and domestic violence.

And, while call volume is down from previous years, that still remains quite high.

It’s not uncommon for the Iqaluit detachment to have two calls sitting in the queue while they are responding to a third, “which sounds like a big city setting,” Sirotic said.

According to the RCMP report, drug-related offences are going down, as are impaired driving, firearms offences and arson.

Mischief and disturbing of the peace are the most frequent calls RCMP receive, he said. And, calls for assault remain high—as does the number of prisoners held in Iqaluit RCMP cells, compared with the size of the city.

Annual stats for offences in Iqaluit to date show:

Councillors still wondered if police here have enough support, even with the promise of three new officers on the way.

“Given the sheer volume of calls, we’re pushing 12,000, are you adequately staffed?” asked Coun. Kyle Sheppard. “If we were to push the GN to get more staff, would it make a difference?”

Likely not, Sirotic said, because staffing is done federally and is based on statistics. He added that the Iqaluit detachment actually requested more than three new staff.

He also told councillors the detachment would look into starting up a walking patrol for the summer months, including around the elders’ centre.

“Sometimes it’s not just to be safe, but it’s also to feel safe,” Sirotic said.

So to keep residents feeling safe, the RCMP would like Iqalungmiut to make sure their doors are locked as break and enters become more frequent in spring and summer.

“This is the time of the year that it tends to pick up,” Sirotic said, adding there was a spike in break and enters last spring around this time.

Following recent firearm incidents in Arviat, Cambridge Bay, and Sanikiluaq, Coun. Terry Dobbin asked what is being done to promote use of trigger locks.

“We have an inordinate amount of trigger locks,” which are made available throughout the territory, said Sirotic. He said the long-running trigger lock program is aimed at firearm safety education but that the locks are pointless if people don’t use them.

A recent tragedy in Akulivik also spurred conversation at the meeting about mental health support.

Coun. Joanasie Akumalik said he had heard that people who received referrals for mental health support from the Iqaluit RCMP were not getting call-backs.

“Something is wrong with the communication with the RCMP and mental health,” he said. “I would strongly suggest the detachment start prioritizing referrals.”

Sirotic said while limited resources required the officers to focus on their role as first responders, mental health support was as much a priority for the RCMP as high-risk cases such as assault or abuse.

As for request from councillors for more community engagement, Sirotic said the detachment also opens its doors for school classes or community groups wanting to learn more about work done by the RCMP.

“My door is always open for that,” he said.

The detachment will also be co-hosting a June 21 barbecue at the elders’ centre for National Aboriginal Day.