Cambridge Bay welcomes the return of narwhal with regulated hunt

“We strictly enforced the rule to harpoon, then shoot” 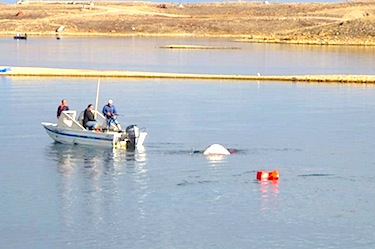 Naikak Hakongak, with rifle, approaches his harpooned narwhal in a boat driven by Jerry Puglik. (PHOTO COURTESY OF N. HAKONGAK) 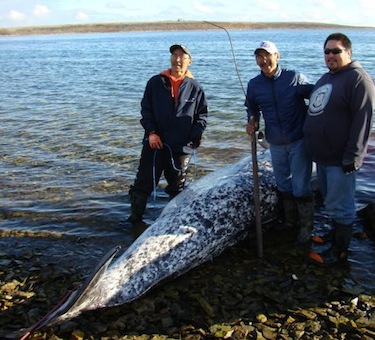 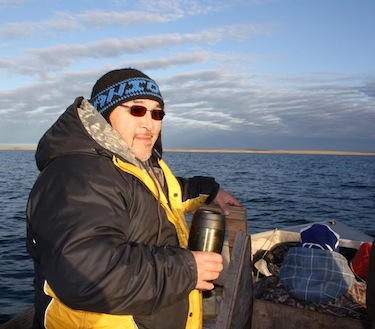 Like many in Cambridge Bay, James Panioyak, the chairman of the Ikalututiak hunters and trappers organization, headed out to hunt narwhal near the community again this year. (PHOTO COURTESY OF J. PANIOYAK)

CAMBRIDGE BAY — You could find narwhal muktuk salad for sale this week in Cambridge Bay as people in this western Nunavut community of 1,500 enjoyed the taste of fresh whale meat and blubber.

There was much to savour in this year Cambridge Bay’s narwhal hunt. First of all, the hunt was orderly: there was no shooting allowed unless the whale was harpooned first.

And the landed narwhals — eight by the beginning of this week — were quickly and cleanly butchered and then distributed to everyone in the community, says James Panioyak, the chairman of the Ikalututiak hunters and trappers association.

If you’d walked down to the shoreline a few hours after a narwhal was butchered, you wouldn’t have even seen any bones left.

This September marked the second year in the a row that pods of narwhals have come into the increasingly ice-free waters around Cambridge Bay.

In 2011, no one was prepared for the whales, Panioyak said.

Unilt then, no one had seen narwhals in Cambridge Bay more than once or twice. In the mid-1990s, a pod of whales entered the bay and then quickly left, Panioyak recalls.

Last year, many eager hunters headed out and ran around in boats after the narwhals. And there was lots of shooting from the novice narwhal hunters — and many shots directed towards narwhal in the shallow waters near the shore scared bystanders.

In preparation for this year’s hunt, an experienced narwhal hunter from Kugaaruk was brought to Cambridge Bay where he presented a workshop on narwhal hunting, Panioyak said.

And this year, “we strictly enforced the rule to harpoon, then shoot,” he said.

Generally, hunters in Cambridge Bay are more used to using guns than spears — to hunt caribou, muskox or the occasional seal in winter.

For the hunt, Hakongak used a spear that he’d crafted out of an oar with a long steel shaft end and spearhead made partially from a stainless steel cheese cutter.

Hakongak, his brother Jerry Puglik and cousin Tony Akoluk also used a new strategy as they went off narwhal hunting in Puglik’s boat.

Their goal: to drive the narwhals into the shallow water. There, Hakongak was able to better see the whales and harpoon a narwhal.

When the harpooned narwhal came up for air, Hakongak finally managed to shoot the huge female in the head.

Dragging the narwhal on to shore proved to be another challenge: the whale was so heavy that its weight was too much for an all-terrain-vehicle — so a truck was called in.

Finally, the ulus and knives came out, and within a short time the narwhal was butchered on the rocky shore, he said.

While Hakongak’s hunt couldn’t have gone better, he would still like to see fewer boats racing around during the hunt.

This year, Cambridge Bay started out with five narwhal tags, and then received five more from Gjoa Haven, for a total of 10 tags.

On Sept. 25, the narwhals were still in Cambridge Bay, along with a killer whale which many spotted from the boats.

If the narwhals return in 2013, as many believe they will due to climate change, Cambridge Bay could use 15 narwhal tags for an annual hunt, Panioyak said.