Deceased Iqaluit baby was to have returned home, inquest hears 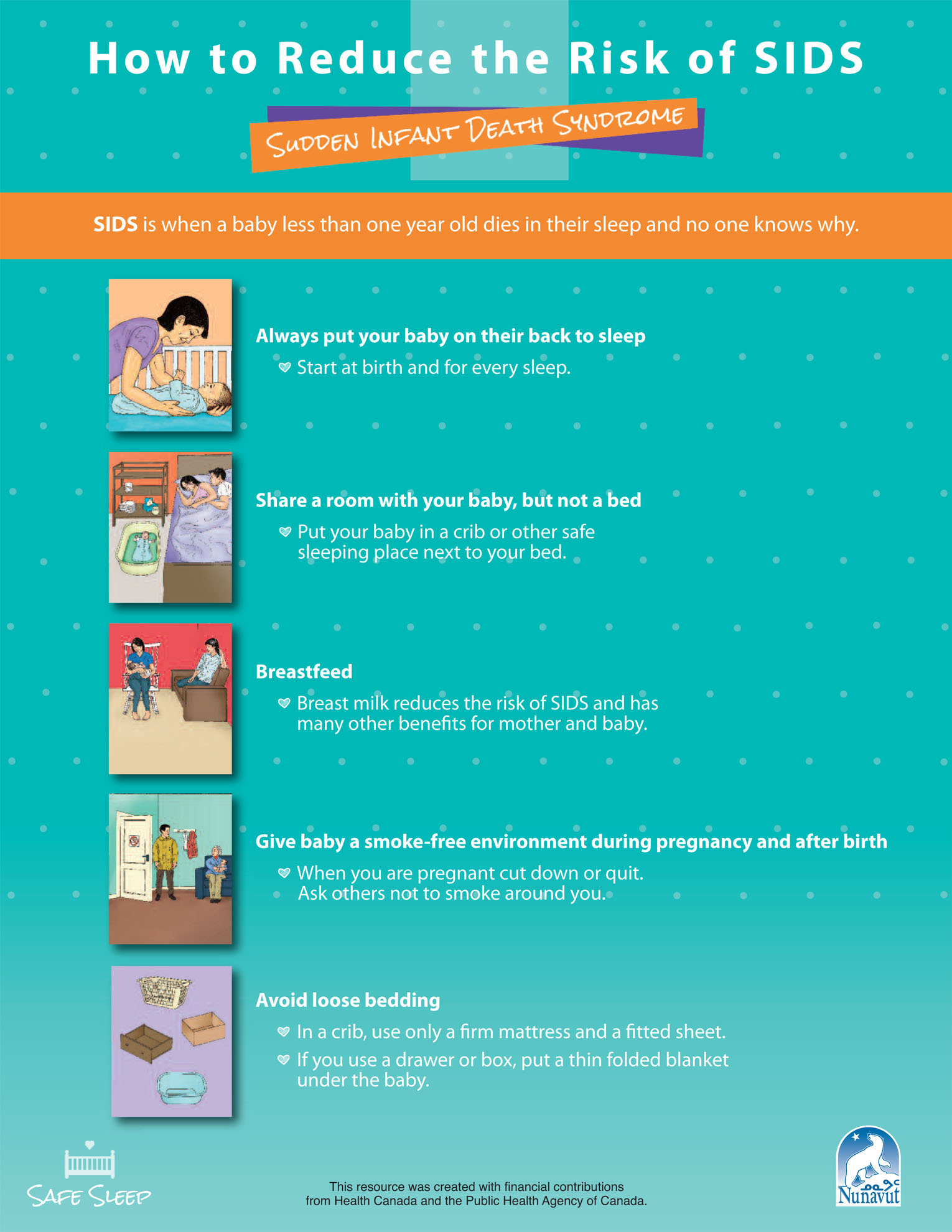 This brochure on SIDS was introduced as evidence at a coroner’s inquest in Iqaluit his week. (GN WEBSITE)

Baby Amelia Keyookta was napping on her tummy at the home of a caregiver employed by the Department of Family Services when she was found not breathing on July 29, 2015, a coroner’s inquest in Iqaluit heard yesterday.

“I put her on her tummy so she could feel like someone was still there with her,” the child’s temporary caregiver, Fabiola Corioland-Hinton said in testimony given via teleconference on the second day of a five-day inquest into the child’s death almost three years ago.

Amelia was sleeping on the bed for only a short while, and social workers were to arrive soon to take the baby back to her parents, Corioland-Hinton said.

The infant was at Corioland-Hinton’s home during the day on July 28 and July 29. The caregiver said she had no reason to think that Amelia was unhealthy.

Other children apprehended from the same home were also in Corioland-Hinton’s care.

While napping on the queen bed at the daytime home, Amelia was uncovered and was lying on a medium-weight mattress on top of a baby blanket. There were only sheets beneath her and there were no pillows near her, Corioland-Hinton said.

The Department of Family Services apprehended four-month-old Amelia from her family the day before, on July 28, when a social worker found excessive marijuana smoke in the home.

Amelia was pronounced dead at the Qikiqtani General Hospital around 3:30 p.m. the next day.

A GN pamphlet on reducing risks of sudden infant death syndrome, also known as SIDS, was introduced as evidence.

“SIDS is when a baby less than one year old dies in their sleep and no one knows why,” the pamphlet says.

To reduce the risk of SIDS, the pamphlet advises that babies should be put to sleep on their backs.

Other advice from the SIDS poster advises parents and caregivers to share a room but not a bed, breastfeed, provide a smoke-free environment before and after birth, and to avoid loose bedding.

Amelia’s mother, Loanna Keyookta, said in her testimony April 23 that her child had been co-sleeping with her, because the family did not have a crib.

When social workers apprehended Amelia for the first time a few weeks before, on July 13, the child was seen alone on a bed with a bottle propped into her mouth using a blanket.

When social worker Nicole Diakite gave her testimony on the apprehension on April 24, she said the marijuana smoke in Amelia’s home made it difficult for her to see and breathe.

It can be very difficult to tell if a baby is exposed to smoke, nurse Susie Pearce said on the same day.

Pearce had seen Amelia during a drop-in baby clinic.

“We know that there is a risk when babies are exposed to smoke. They’re more at risk for respiratory and ear infections and sudden infant death syndrome,” Pearce said.

Nunavut has the highest rate of infant mortality in Canada. In 2016, the GN introduced a baby box program where a box—which comes filled with supplies to help care for a newborn—can be used as a bed for the baby.

In her testimony, social worker Holly Uvilluk said the department provides cribs to foster homes and daycares when they are needed, and tells caregivers not to keep the children in their beds.

As for SIDS, it wasn’t talked about at work, she said, but she knew about the syndrome.

The two other social workers involved with Amelia said they did not talk about SIDS and safe sleep practices for babies at work.

On July 29, Family Services worker Aleisha Wesley noticed the baby was not breathing. Corioland-Hinton, who was trained in CPR, tried to resuscitate the child.

Emergency workers spent 30 to 35 minutes trying to revive Amelia at the residence, and again for half an hour at the hospital, said Dr. Manna Adegbite, the pediatrician who saw Amelia.

“When we started the CPR she already had a low survival chance,” Adegbite said.

“We did not get a heart rate or signs of life from the patient … the pulse did not return.”

While Amelia’s hospital record showed she was diagnosed with a common cold two weeks before, and with a respiratory illness earlier in June, Adegbite said the baby didn’t show any medical problems at the hospital.

“There was nothing that stood out,” she said.

After Amelia died, Nicole Diakite said she stayed with the parents at the hospital for many hours.

“They held the baby, they grieved,” Diakite said. “I offered mental health counselling. I just was there. I waited in silence. It was very difficult.”

Holly Uvilluk, who drove Amelia’s parents to the hospital, said she later took the family to buy flowers for Amelia and said that staff from the department delivered groceries to the family.

But the social workers, daycare provider and foster parents didn’t feel as supported.

“I remember Aleisha saying she was so upset she couldn’t sleep the night before, she felt sick,” Diakite said.

Uvilluk said the team had a group meeting with people from mental health services, some time after.

Corioland-Hinton said she “felt like a criminal” after Amelia was taken away from her home.

She gave a statement to the RCMP and was not able to get into her home for some time.

The foster parents who kept Amelia overnight on July 28 said they couldn’t get a hold of anyone in the department after the death.

“I wanted to know what was going on, and what happens from here,” Michael Hatfield said.

“My wife and I were more than capable of handling children, but when there were health problems … I wish we would have had more education.”

His wife, Denise Hatfield, said she kept Amelia, and a premature infant who came from the same home, in bassinettes in her bedroom overnight.

She said Amelia was fussy the night before, and she thought the child was teething.

“Two and a half years later I’m still running through my mind if I’ve done things wrong. I’m still upset about it,” Denise said.

“She was a chubby, happy baby. She was quiet, she smiled a lot, loved to be picked up.”

An inquest is not a trial and it does not look to find fault.

Witness testimonies are heard by a jury. Following the inquest, a verdict will give the cause of baby Amelia’s death and make recommendations for avoiding similar deaths in the future.

Northwest Territories Coroner Garth Eggenberger is presiding over the inquest, which will run until April 27.