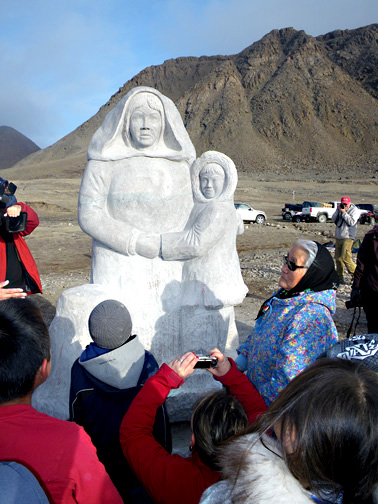 Rynee Flaherty, right, the eldest survivor of the Grise Fiord exiles, examines the monument to the high Arctic relocation as it’s unveiled Sept. 10. It took Grise Fiord carver Looty Pijamini 10 months of work over two years to cut the monument out of solid Ellesmere Island granite. (PHOTO BY GABRIEL ZARATE) 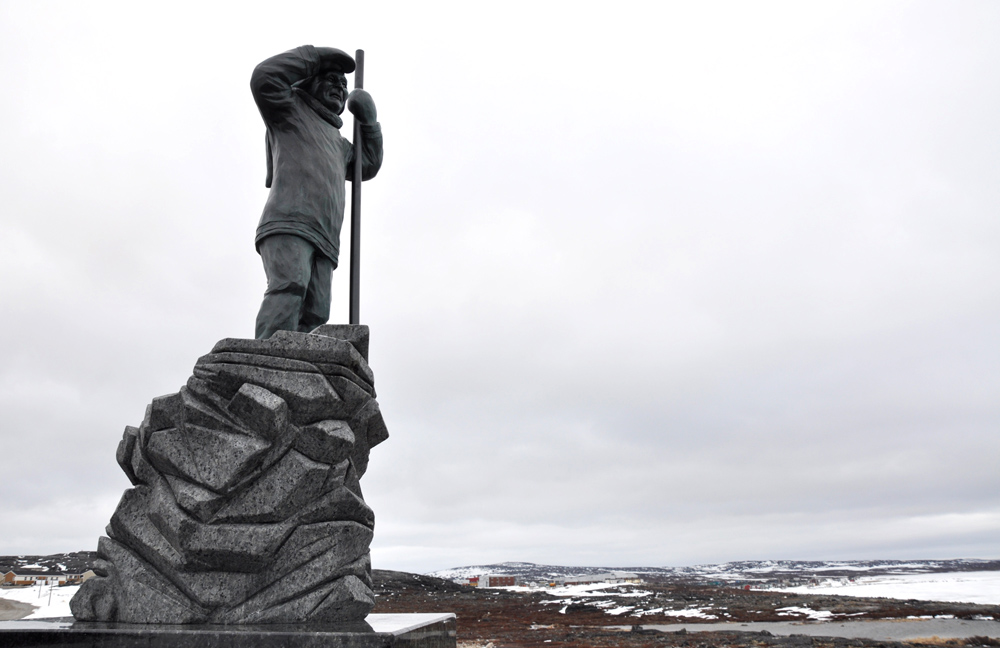 In 1953 and 1955, the federal government relocated more than 90 Inuit from Inukjuak and Pond Inlet to Resolute Bay on Cornwallis Island and to Craig Harbour on Ellesmere Island. Between 1956 and 1962, the families at Craig Harbour moved about 40 miles west to to Grise Fiord.

Paddy Aqiatusuk was a man who was a born leader and hunter, and one of the best soapstone carvers in Inukjuak, respected by everyone.

His knowledge of his homeland was limitless. He was a religious person and he would often lead his entire family in prayer at his ancient campsite.

Aqiatusuk’s ancestors had lived at this camp for many centuries. The land provided his people with its riches and gave them many varieties of food during the long, warm months of summer.

Each year in July, Aqiatusuk hunted flightless geese in the lakes not far from his campsite. He fished with his nets off the shoreline of his camp and its lakes in the winter.

The sea provided sea mammals, mussels and sea urchins, and there were blueberries and blackberries on the land.

The trading post of the Hudson Bay Co. was only five miles south of his camp. His brother Willia was employed by the RCMP as special constable and guide. As well, his brother Pilipusi’s wife, Annie, had a sister living at the trading post.

So it was not surprising to see them spending a great deal of time with their family members, who were permanent residents of the trading post. For this reason, they were branded as “beggars” by the government.

Aqiatusuk, as well as all the people in the Inukjuak area, did not need to beg for anything. The land, as well as trade goods, provided for all their needs.

They lived on land that had been handed from one generation to the next for centuries. They were among their extended families and living in their chosen camps. The seasonal changes and movements of animals dictated the lives of our people.

But in the eyes of government personnel who had few contacts with our people and who did not know of our ancient customs and traditions, we were destitute.

And describing our land as the “hungry coast” was an insult to our land. In far-off Ottawa, Paddy Aqiatusuk’s fate was being decided.

Eight months after he and his family members arrived in Craig Harbour, about 40 miles east of Grise Fiord, he died, a hopeless and broken man.

Upon arrival in our new land, many of us were surprised at the coldness of the air and the low dark clouds that rolled across the skies of the strange land.

And by afternoon the first snow storm of the season arrived with full force.

By this time of year in our original home, our extended families would have been living at our fishing camp, where char in their thousands travelled back to the lakes until next season, when they would reverse their direction and swim and feed all along the rocky shores of our ancient homes.

We would set our nets and in a few days and nights our caches would be filled with fat fish and our winter supplies for the approaching winter would be assured.

Unlike codfish, the Arctic char, with its fatty and delicious meat, brought much-needed energy for our families and dogs.

In the winter, when we ran low on seal meat and supplies, we would travel to the mainland from our winter camp and fetch our buried supplies and take them back to our camp to feed ourselves and our dogs.

Nuvutseet was our winter camp, because it was the last large island to the east of our mainland campsites. It was closest to the open sea, which provides seals and bearded seals.

And when the cold, clear, cloudless days arrived, our camp would come alive with activities, as we prepared our dogs for the day’s hunt. And then, before the sun had risen above the horizon, we would approach our destination, where we would wait for the seals.

In many cases, we would get 10 to 12 seals in a single day, and at other times not one seal was caught. Such was the life of our people.

None of these important resources of the sea were in any danger of depletion at any time in the past.

In the summer, many lakes all over our land would be occupied by flightless geese and we would hunt them. One time, our Peterhead boat would be half-full of the fruits of our hunt.

East of our shores lay hundreds of islands, homes to many varieties of wild fowl. In these islands, we gathered many hundreds of eggs from geese, eider ducks and many other smaller ducks of different types.

This was a welcome change to our daily diet, mostly of seals, bearded seals, fish and cod. Eggs and blueberries, mussels and sea urchins were considered delicacies.

In the summer, there would be so many blueberries on the land that we had to walk carefully among those delicious berries and the ground used to turn blue. The land provides.

The depletion of wildlife resources, and overpopulation in the Inukjuak region, was said to be the main reason for the implementation of the 1953 relocation to the High Arctic.

The truth is that there was neither depletion of wildlife nor overpopulation in relation to the available resources of the region.

The southern people who had done wildlife research in the area during previous decades seem not to have sought this vital information from the hunters.

Instead, these people seem to have relied on false information given to them by local police officers, nurses, missionaries and traders.

The false information they relied upon was also responsible for the wrongful action by the government that would cause us to lose our homeland and separate us from our extended families.

Read Part 4 of this memoir on Monday on Nunatsiaq.com.