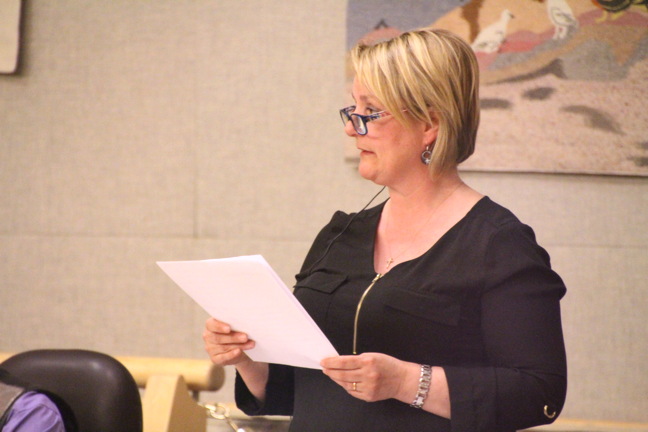 Iqaluit-Niaqunnguu MLA Pat Angnakak and chair of the standing committee that analyzed the Auditor General of Canada’s audit of Nunavut healthcare, delivers the committee’s report in the Nunavut legislature June 5 and makes recommendations on how to address problems outlined by the auditor general. (PHOTO BY BETH BROWN)

These requests were contained in three recommendations made June 5 in a standing committee report on the review of the Office of the Auditor General’s March 7 health audit—an audit which showed frontline health workers in Nunavut do not have the support needed to deliver adequate health care.

A disconnect between policy and actual practice was a “central theme” of the review, chair of the standing committee, and MLA for Iqaluit-Niaqunnguu, Pat Angnakak, told her colleagues when she delivered the report in the legislative assembly June 5.

She said while policies and procedures for quality assurance, recruitment of staff or workplace safety do exist, “they were not always carried out.” She said such rampant shortfalls are bound to lead to a “system breakdown.”

Still, “the delivery of such a complex system as healthcare is no exception,” said Angnakak.

Committee members say better training is the most important fix needed, along with tracking of that training and up-to-date certification for both new and current employees.

The report cited an example where interpreters at health centres were not trained in medical terminology needed to help English speaking health care workers and Inuit patients communicate properly.

And training must involve workplace safety which can impact Nunavut’s reoccurring problem of staff retention, said Angnakak, who shared one example of a nurse who quit after experiencing an incident of workplace violence.

“The role of nurses in community health centres in particular is critical to delivering adequate health care services at the local level,” said Angnakak.

The committee asked to see competitive salaries and benefits for indeterminate nurses, and to see the health department create more opportunity for short-term nurses currently working in Nunavut who have shown interest in staying in the territory.

And, the report wanted to see permanent positions filled faster.

Right now, it can take as many as 500 days for a position to be filled, she said. This is on top of figures from the Auditor General’s report that showed more than 500 indefinite health positions within the Government of Nunavut which were vacant at the end of December.

The standing committee said to fix this, the departments of health and finance are going to have to talk to each other and work together.

Angnakak said the committee saw staffing delays worsen, and best-effort plans get canned, when requests were stalled between departments.

“Members of the standing committee learned of instances where the Department of Health had brought forward business cases to the Department of Finance to request funding for specific initiatives which would have addressed some of the shortfalls in supporting health care service providers, and these requests were either denied or only partially funded,” she said.

She suggested the finance department should find ways to better assess merits of a proposed project.

As a last request, the report asked for regular updates from the Department of Health on its new service delivery model—called the “model of care”—that is being developed by the GN.

The committee report acknowledged that some issues raised in the audit were already being addressed and that responses from both departments show they are in agreement with the audit.

“The standing committee appreciated the level of detail and information included in the Department of Health’s follow-up report,” said Angnakak.

The three recommendations of the standing committee are as follows, that:

• the departments of Health and Finance continue to work together to improve the staffing process for health care professional positions and ensure that the newly developed Health Professional Recruitment and Retention Strategy addresses the need to retain staff within our communities; and,

• the Department of Health provide regular updates on the development and implementation of its new “model of Care” service delivery model to MLAs.