“It just came out of nowhere” 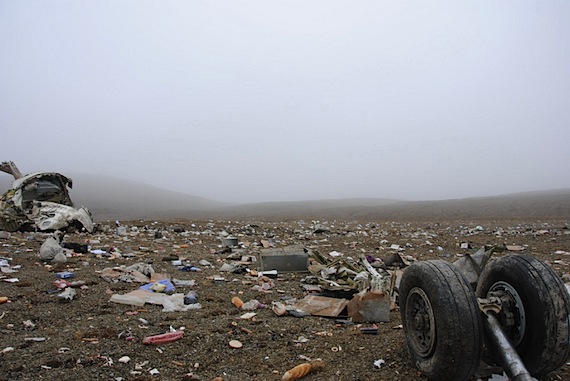 This was the scene which met Nicole Williamson, 23, on Aug. 20 after First Air flight 6560 crashed into the hillside near Resolute Bay. Williamson spoke to Peter Mansbridge of CBC’s The National in an interview that aired on Sept. 19. (FILE PHOTO)

The sound of burning wreckage and an unforgettable stench of mud, fog, and aviation fuel: these are among the memories Nicole Williamson shared about the Aug. 20 crash of First Air 6560 in Resolute Bay in an interview that aired Sept. 19 on CBC’s The National.

Williamson, 23, said after the moment of impact she could feel and see the aircraft break in front of the window bulkhead seat where she sat.

Willliamson, colleague Robin Wyllie, 48, and Gabrielle Pelky, seven, were the only survivors out of 15 passengers and crew.

Williamson, a graduate student in geology at Carleton University who had worked this summer for the Canadian Geological Survey on Victoria Island, was returning to Resolute Bay from Axel Heiberg Island on a short-term work contract with Aurora Geosciences, a mining support company with offices in Yellowknife and Whitehorse.

Before boarding the flight in Yellowknife, Williamson met Pelky, the step-granddaughter of Resolute Bay business owner Aziz Kheraj, who had chartered the airplane to bring supplies in for the Operation Nanook military exercise, his South Camp Inn and the Polar Continental Shelf Project.

Pelky was travelling with her sister, Cheyenne Eckalook, six, to Resolute Bay.

“I said, ‘I’m going to Resolute, where are you going?’ And she said: “Me too… we’ll be on the same plane!’ ” Williamson told CBC’s Peter Mansbridge at the Ottawa home of her parents.

As the airplane came in to land there was thick fog, and no warning of the crash before it happened, she said.

“There were no noises. It was, it was completely sudden and violent, but the key is that it was sudden. It just came out of nowhere” — similar to what Gabrielle Pelky earlier told RCMP in Iqaluit.

Williamson said the portion of the aircraft she was sitting in separated, then rolled over several times. She came to a stop still strapped to her chair.

“I’m going to be honest. I was breathing heavily and swearing and trying to figure out what was going on,” she told Mansbridge.

Then she heard Gabrielle Pelky — who had been sitting two seats behind her— and went over to her. Pelky’s leg was visibly broken, she said.

During the CBC interview Williamson praised Pelky for her mature behaviour in the aftermath of the crash, which killed her sister, Cheyenne Eckalook, six. The two managed to move away, finding Wyllie, who had a crushed chest and many broken bones.

As the fog lifted, they could see Resolute Bay, she said.

Williamson, who thought she had heard other passengers being rescued in Resolute Bay, only learned that she, Pelky and Wyllie were the only survivors in Iqaluit where nurse there told her no more passengers on their way out of Resolute Bay.

Williamson said she’s remained in contact with Pelky, now back in school in Iqaluit — and has seen her a couple of times since the crash.

A smiling photo of Pelky, wearing a brightly coloured cast on her left leg, was shown during the interview.

Wyllie continues to recover from his injuries in Yellowknife, she said.

Williamson, who said she’s allowing herself some time to grieve the Aug. 20 crash, attributes her survival to the “luck of the draw.”

It was only by chance that she was given seat 17A, she said. As it turned out, she, Wyllie and Pelky all sat on the same side of the aircraft, sitting behind each other by the windows.

Marty Bergmann, the director of the Polar Continental Shelf Program, who was sitting next to Wyllie did not survive the crash, along with 11 others who boarded the flight that morning.

Next time as she checks in, Williamson said she would ask once more for a window seat — and hope for the best, she said.