“We’re not going to bring in the large vehicles” 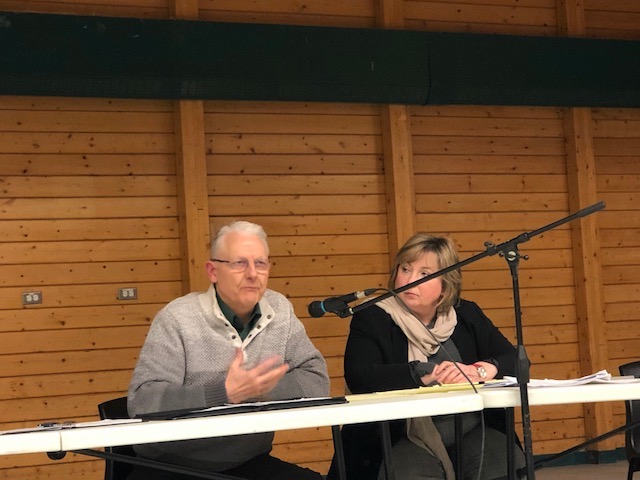 John Vandenberg, assistant deputy minister of the Government of the Northwest Territories’ Department of Infrastructure, and Kelley Ryder, the department’s senior communications officer, field questions from a disgruntled crowd Oct. 15 about what the GNWT will do about its cancelled barge into Cambridge Bay. (PHOTO BY JANE GEORGE) 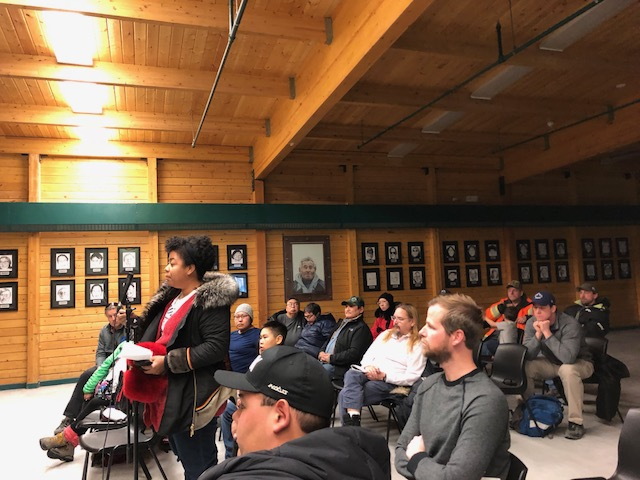 Cynthia Ene from the Kitikmeot Chamber of Commerce stands during the Oct. 15 meeting on the cancelled barge into Cambridge Bay to remind the GNWT about the big economic impact of the cancellation on the Northwest Territories and Nunavut. (PHOTO BY JANE GEORGE)

CAMBRIDGE BAY—Cambridge Bay residents reacted with anger and disbelief when they learned last night that large vehicles and other items on board a barge stranded in Inuvik will not be airlifted to their community.

At a meeting with John Vandenberg, assistant deputy minister of the Government of the Northwest Territories’ Department of Infrastructure, and Kelley Ryder, the department’s senior communications officer, they learned that these items are not part of what Vandenberg had called a “massive logistic effort” to move goods from Inuvik to Paulatuk, Kugluktuk and Cambridge Bay.

Earlier, Vandenberg had not ruled out flying in vehicles from the stranded barge. For Cambridge Bay, this cargo includes some 30 pick-up trucks as well as new water, sewage and garbage trucks for the hamlet.

But Vandenberg announced last night that his minister, Wally Schumann, had since decided there would be “no vehicles” put on aircraft.

“We’re not going to bring in the large vehicles,” Vandenberg told a crowd of about 40 people at the Luke Novoligak Community Hall.

Instead, “whatever fits” will be flown in, he told them.

About 100 or so flights are planned by the GNWT to bring in some of the materials that never made it on the last GNWT-owned Marine Transportation Service barge, cancelled two weeks ago, that will now over-winter in Inuvik.

Aircraft, chartered from airlines that responded last week to a tender request from the GNWT, will only be able to carry pallets and smaller vehicles like ATVs, Vandenberg said.

A Lockheed L-188 Electra, with a payload of about 33,000 pounds, could arrive in Cambridge Bay midweek, he said, but it won’t be able to carry some of the larger vehicles bound for the community.

Some people at the meeting called on the GNWT to charter a Hercules from the United States to bring in larger items or even send a cat train down the Arctic coast, but Vandenberg said that wasn’t part of the plan.

After repeated questioning about this, a reluctant Vandenberg said he would transmit the question to his deputy minister.

The airlift plan was hatched earlier this month after outrage over the Oct. 1 barge cancellation grew in western Nunavut and those affected in Cambridge Bay held a meeting to call for action.

As well, last night Vandenberg stated there would be “no compensation” for Nunavut residents with stranded cargo, and that MTS and the government wouldn’t be responsible for additional costs incurred due to the cancellation of the barge as a result of ice conditions.

Local businessperson Stuart Rostant is awaiting the arrival of sea cans containing building materials for a four-plex. He will have to bear the costs of these unused materials for a year, a situation he called “unfair.”

An upset Suzanne Maniyogina said she had tried to get information for the past two weeks from MTS about the fate of her new truck, only learning at the Oct. 15 meeting that she wouldn’t see it on the airlift. Another woman, who had also expected to receive a new truck on the cancelled barge, said the GNWT had no idea of the added expense she would bear not having her own transportation this year.

Vandenberg acknowledged that “not everyone is going to be happy.”

MTS is setting up toll-free information numbers for each community affected by the cancellation, he said.

Peter Laube, who owns a construction company, Kalvik Enterprises Inc., told Vandenberg that he already had to fly in materials at a big additional cost due to the barge cancellation.

Before walking out of the meeting early, Laube offered this advice to the GNWT: “You created this problem, you fix it.”

Several people at the meeting said they would never again use MTS, acquired by the GNWT in 2016. They also questioned the company’s commitment to western Nunavut, noting that MTS had almost cancelled the barge to Cambridge Bay in May.

And they said the competing Montreal sea lift companies managed to get their vessels into the community despite bad ice conditions.

But MTS, which is based in Hay River, may not need Nunavut business that much. On Oct. 13, Ottawa announced it would invest $19.5 million in four double-hulled barges to deliver fuel to northern communities and opened the Hay River Training Facility to provide marine safety training.