Inuit art magazine back in print 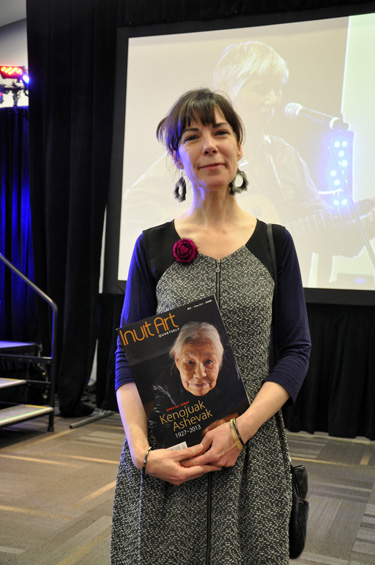 Christine Lalonde, the chair of the editorial board of Inuit Art Quarterly, holds up the January 2014 issue of the magazine, dedicated to the late artist Kenojuak Ashevak. (PHOTO BY SARAH ROGERS)

After a two-year absence, the Inuit Art Quarterly magazine is back on newsstands.

The January 2014 issue of the glossy magazine, which highlights artists from across Inuit Nunangat, is the first copy to be published since the revival of its publishing house, the Inuit Art Foundation.

And the magazine’s latest issue features an Inuit artist with a giant reputation.

“This first issue is dedicated to Kenojuak Ashevak, who I’m sure needs no introduction,” said Christine Lalonde, the chair of the magazine’s editorial board, told a crowd at the Northern Lights business and cultural showcase Jan. 31 – when there Inuit Art Foundation had a booth.

“She’s a hero to so many of us that have worked with Inuit work.”

The issue features many photos and articles including some on the late Cape Dorset artist. The magazine also includes a 1983 interview with Ashevak when she received the Order of Canada, and contributions from other artists who worked with Ashevak and were influenced by her work.

Ashevak, one of Canada’s best-known Inuit artists, died in early 2013 at the age of 85.

To continue her legacy, the Inuit Art Foundation has launched a memorial fund and an arts award in Ashevak’s honour.

The first of its kind targeting Inuit artists, the award of up to $15,000 will be granted every two years, starting in 2015.

“It will allow us to support an artist of Inuit heritage who will participate in an artistic residency anywhere in the world,” the foundation’s William Huffman told the Northern Lights conference Jan. 31.

An artist who has demonstrated an outstanding body of work, along with “a commitment to the arts at a local, regional or national level in the Canadian Arctic” will be selected through a nomination process by a jury of peers.

The memorial fund and award is appropriate, as Ashevak was a great supporter of the foundation and its publication.

When the foundation closed its doors in March 2012, Ashevak contacted the organization and asked its members to try and preserve the magazine to help younger generations know about Inuit art.

The IAF suddenly shut down after a federal evaluation recommended that Aboriginal Affairs and Northern Development — one of the foundation’s main funder — take a second look at IAF’s role and funding.

That evaluation gave the foundation a mixed review, noting its outreach was limited and difficult to measure.

But letters of support spurred a revival in December 2012, with a new board of directors led by president Jimmy Manning, retired manager of the Kinngait Studios in Cape Dorset.

It took another year to release the next copy of Inuit Art Quarterly. The magazine, the only one in the world dedicated to Inuit art — helps improve prices for the producers of Inuit art and helps market Inuit art on a global basis.