“We’re trying to seize an opportunity” 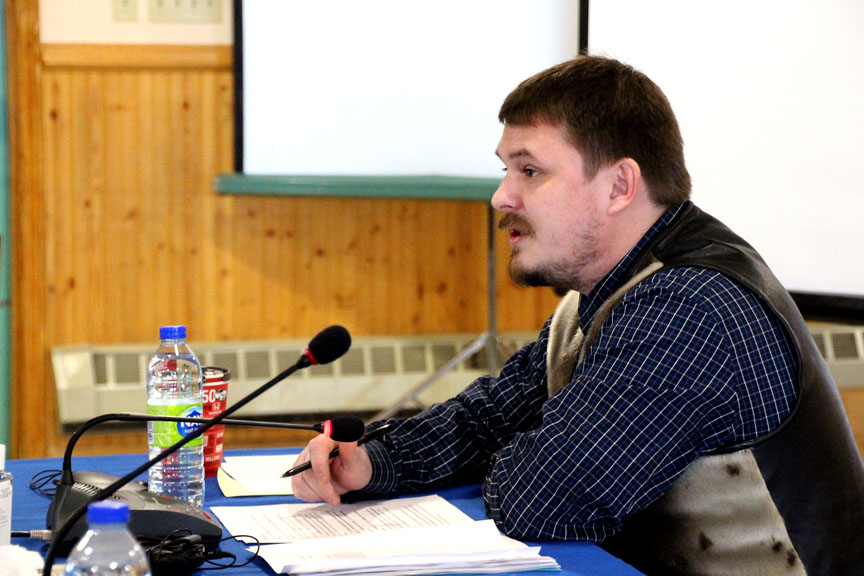 The Qikiqtani Inuit Association described plans for Tallurutiup Imanga IIBA negotiations at a board meeting in Iqaluit, Feb. 28. (PHOTO BY BETH BROWN)

An Inuit impact and benefit agreement for the proposed Tallurutiup Imanga national marine conservation area in north Baffin may be signed as early as March 2019, the Qikiqtani Inuit Association says.

“There’s never been this level of interest from the Government of Canada, this much motivation and will, and the relationship between PJ [QIA President PJ Akeeagok] and Minister McKenna has been unprecedented,” she said.

“There’s really strong political will on both sides,” Beveridge said.

The Tallurutiup Imanga region is commonly known in English as Lancaster Sound, but QIA prefers that its designated Inuktut name be used.

It’s twice the size of the province of Nova Scotia and, once created, will become Canada’s largest conservation area.

Beveridge said that QIA sees the IIBA negotiations as an opportunity to ensure Inuit rights are recognized in the area of marine management.

For the federal government, the negotiations could gain international respect for Canada by strengthening sovereignty in the Arctic and displaying support for the United Nations Declaration on the Rights of Indigenous Peoples.

So between now and next March, the Qikiqtani Inuit Association will develop—in talks with federal departments like Fisheries and Oceans, Transport Canada, and Infrastructure and Development Canada, as well as Parks Canada—both a management and implementation plan for the soon-to-be-signed IIBA.

“This will only take a year,” QIA president PJ Akeeagok told board members. “We’re trying to seize an opportunity.”

Earlier in the day he told Nunatsiaq News that the lands and waters of the marine conservation site mean more to Inuit than mere geography.

“It’s who we are as a people,” Akeeagok said.

To make sure Inuit in affected communities are part of the negotiations, earlier this year, QIA’s chief negotiator for the IIBA, Sandra Inutiq, consulted with residents of the five communities most affected by the agreement.

“The community visits were very successful and there will be more as we go forward,” Akeeagok said.

Negotiations for the Tallurutiup Imanga IIBA coincides with the federal government’s work on a new Arctic policy framework to replace the former Conservative government’s northern policy.

And they are also looking for ways to dole out a $1.5 billion Ocean Protections Plan fund.

“I’m very optimistic. If we are able to influence policy that is going to shape the Arctic, then I think we are doing our job quite well.”

That’s why the Baffin Inuit organization recently submitted a report to the federal government titled A New Approach to Economic Development in Nunavut.

The 26-page document, tabled at the QIA board meeting, emphasizes reconciliation in relation to infrastructure spending and economic development in the Qikiqtani region.

In the report, a participant from a 2013 community consultation for a QIA-run Tallurutiup Imanga feasibility study is quoted as saying, “Inuit have a very strong emotional link to the land and wildlife.”

The report itself says: “There is consensus that conservation must also result in development for Inuit…

“For Inuit, the purpose of conservation is the creation of socio-economic and cultural equity between Inuit and all other Canadians, while supporting reconciliation, climate change, and, ecological integrity.”

The report also calls for:

• Developing a permanent guardian program to highlight regional knowledge and to increase training and employment opportunities.

• Infrastructure and training initiatives for the processing of country foods to support hunters and harvesters.

• Inuit participation in the development of any tourism or fishery projects with the Tallurutiup Imanga conservation area.

• Incorporation of Inuit Qaujimajatuqangit into the governance structures of the conservation area.

• Community-specific cooperative projects that help each community participate in the success of the conservation area.

“We’re looking at marine infrastructure, which is a high priority for Inuit, and how we can utilize Lancaster Sound,” Akeeagok told QIA board members.

“The waters are heavily utilized by all communities. We all know the importance of protecting the water.”

Akeeagok said efforts made by the Kitikmeot Inuit Association to include Inuit in the management of Franklin heritage sites can be used as a model for what the Baffin organization does in the future.

Negotiations for the Tallurutiup Imanga IIBA will be paid for through a $1-million federal contribution agreement signed between QIA and Parks Canada.