Once-forbidden Inuit songs to be heard in Iqaluit public performance

“When the Christian missionaries started coming in, Inuit were not allowed to sing the pisiit any more” 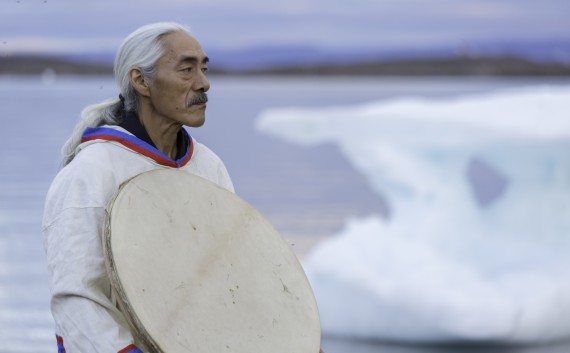 Pakak Innuksuk, an Inuit drummer, will be one of the instructors at Qaggiavuut’s course on traditional Inuit pisiit songs that were banned for decades by missionaries. Students from across Nunavut will learn eight Inuktitut songs from eight elders from Monday to Friday and will perform the first public pisiit concert in 50 years next Thursday. (PHOTO COURTESY OF QAGGIAVUUT)

When Rhoda Ungalaq was growing up, sometimes a man would sing pisiit under his breath, in a whisper, just loud enough for her to hear. As a child, she did not particularly like the songs, but Ungalaq realizes now that was mostly because she just did not understand them.

The lyrics of these story-like songs would use unusual versions of Inuktitut words, which she found confusing as a child, such as “nagjulikjuaq”, which means “the one with the big antlers,” instead of “tuktu.” They were spiritual songs about life—hunting, animals, hardships—using poetic language.

“It is singing a language we don’t use every day. They’re very hard to understand because you have to know the story. And these songs are not written, it is all by memory,” Ungalaq said.

Now, for what would be the first time in 50 years, traditional Inuit pisiit―or songs―will be performed in Iqaluit for the public.

This concert, to be held on August 9 at the Iqaluit soup kitchen, will close off a four-day master course in spiritual Inuit song, organized by the Qaggiavuut Society. This short program will be taught completely in Inuktitut, with 34 lessons and eight elders teaching their own chosen pisiit. Susan Aglukark will lead the choir rehearsals.

“When the Christian missionaries started coming in, Inuit were not allowed to sing the pisiit any more,” said Ungalaq, who helped plan the course and will be a participant.

Elders from various communities across Nunavut will teach these songs and Qaggiavuut plans to film each one as they talk about the pisiit they chose and what it means to them. Qaggiavuut is also creating an iPad app for students to learn about pisiit.

This way, the ancient art form can live on.

Although the students from communities in Nunavut other than Iqaluit have already been selected, program registration remains open for applicants who are currently living in Iqaluit. Qaggiavuut will accept students right up until class starts on Monday. All you need to do is give them a call or show up at the Qaggiavuut office.

They just ask is that if you do have an interest in taking the course, which is free of charge, you must commit to attending the whole program. It runs from Monday, Aug. 6, until Friday, Aug. 10, all day, and is open to all ages.

Ellen Hamilton, who organized the pisiit project, suggests that prospective students ask their employers if they can take a professional development leave from work for this training.

“It is an intensive course in Inuktitut and Inuit traditional knowledge,” Hamilton explained.

Qaggiavuut will also offer financial support and childcare support for those interested in taking the free course but who might otherwise be discouraged from doing so, if it involved taking unpaid leave or getting a babysitter.

Because the pisiit course will only be taught in Inuktitut with no English translation, Hamilton warns that students must have a grasp of Inuktitut or be patient enough to try to immerse themselves independently into the five days of lessons.

The students’ final performance will be a reflection of what they learned over the program―the final pisiit concert held at the soup kitchen on Thursday.

Since Ungalaq’s confusion about pisiit in her youth, she later went on to research these traditional songs and write a thesis on the subject during her teacher training.

Now she is happy that this course will be taught in Iqaluit, long after the public singing of pisiit was discouraged by missionaries eager to assimilate Inuit.

It’s important that Qaggiavuut is working hard to preserve these songs for the generations to come, she said.

“When people make songs, they do healing. When they go through hardships and put it into songs they feel much better. You have to let it out through songs,” Ungalaq said.

An earlier version of this story stated that Rhoda Ungalaq heard her father sing pisiit as a child. In fact, it was someone else’s father. As well, the story originally stated that Ungalaq would be teaching at the workshop, when that is not the case.