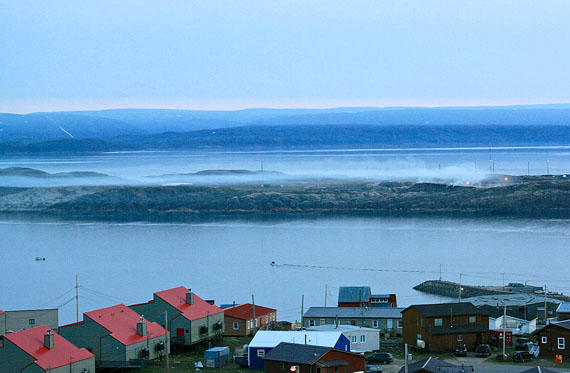 Smoke from Iqaluit’s dump fire does carry pollutants hazardous to health, but not at levels nearly high enough to cause a public health emergency, according to Nunavut’s health department.

“This is not in my view a public health emergency,” the territory’s chief medical officer of health, Dr. Maureen Baikie, told councillors and administrators Aug. 1 at a special meeting of Iqaluit City Council.

Baikie said eight weeks of air-quality monitoring in Iqaluit by Environment Canada and Health Canada show that a list of potentially hazardous pollutants in the smoke are “at values that are well below environmental guidelines and standards.”

Even so, the department of health will continue to issue health advisories to protect residents most vulnerable to two types of pollutants in the smoke: fine particulates, otherwise known as soot, and potentially cancer-causing dioxin and furan chemical compounds.

Residents who should avoid exposure are “those with heart or lung disease and asthma, the elderly, children, pregnant women and women who may become pregnant,” Baikie said.

The continuing advisory advises that such people avoid inhaling smoke when winds carry it into the city.

The notice hasn’t changed since the government first issued health warnings shortly after the fire began May 20.

Although the levels of fine soot particles “are well below” Health Canada standards on average for any given 24-hour period, Baikie said data from air quality monitors showed some “short-term spikes” in levels.

These spikes could produce symptoms in residents with heart or lung disease —which is why the advisory still stands, she said.

“For example, in asthmatics, they may become wheezy if they’re exposed to short-term spikes, even if the 24-hour level is within guidelines,” Baikie said.

Short-term spikes in fine particulates “may cause nausea, headaches, irritation to the eyes, nose or throat,” says the most recent health advisory, released by the government July 31.

“People with chronic lung disease and heart disease may find that their symptoms worsen.”

Even so, Baikie said Qikiqtani General hospital has not admitted anyone with health complications caused by the smoke, although a “small number” of residents have gone to the hospital with complaints related to it.

Dioxins and furans in the smoke are a different concern, Baikie said. Their health effects don’t show up immediately, but after prolonged exposure at certain levels.

Depending on the type of exposure, these could cause health effects such as skin disorders, liver problems, impairment of the immune system, effects on growth and development, and certain types of cancer, according to Health Canada.

Lacking guidelines on safe exposure, the government chose what Baikie called a “very conservative standard” from the Government of Ontario, because it’s the most up to date.

Ontario won’t actually fully adopt the standard until 2016, she said.

Air quality samples from four locations in the city — from the airport in the north to Apex in the south — show that Iqaluit’s air quality exceeded the Ontario standard for dioxin and furan exposure in a 24-hour period “on occasion,” she said.

The standard is based on studies of animals during pregnancy, Baikie said.

“They look at the lowest concentration that will cause any health effects at all. And the health effect turned out to be a possible decrease in fertility of male offspring,” she told city council.

The department’s first public health advisory referred to women “child-bearing age” in relation to dioxin and furan exposure, and “the intent of the advisory is for women who are pregnant, or may become pregnant to take steps to reduce their exposure,” Baikie said.

“I acknowledge that the advisory about women of childbearing age did cause some anxiety in the community because it was interpreted broadly,” she said. “The intent was to protect the unborn baby.”

The chief medical officer reminded that 90 per cent of human exposure to dioxins and furans comes from food.

The rest comes from burning matter such as cigarette smoke, fuel exhaust and burning wood, as well as burning garbage.

“The Ontario standard is very conservative, and by that I mean protective of health,” Baikie said.

Iqaluit’s fire department has so far contained the dump fire to a single pile within the landfill.

City council ordered the city’s fire chief, June 11, to put out the fire “by any means he sees fit,” largely due to concerns about the unknown health effects of the dump fire smoke.

The fire department has since consulted with an expert and drafted a plan to extinguish the fire with sea water from Frobisher Bay.

That plan will cost the city at least $3.3 million, fire chief Luc Grandmaison told council at the meeting. More over, the chief said he could not guarantee that the plan would be successful.

The territorial government approved the fire-extinguishing plan at the end of July.

Baikie said her biggest concern is “what would be the effect on air quality of an attempt to extinguish the fire.”

Health Canada and Environment Canada have reviewed the city’s fire extinguishing plan, “and they feel that the plan does include mitigation measures (against smoke) so that things can be managed,” she said.

“So it’s a case of weighing intermittent smoke exposure with the current situation (letting the fire burn) for an unknown period of time, versus the plan to put out the fire.”

Grandmaison said fire-extinguishing efforts will generate more smoke at the dump at the beginning of the operation. Limiting this will be a big part of the job.

“We must put water on it beforehand, and keep those ashes and combustibles as wet as possible in order to reduce the dust” Grandmaison told Nunatsiaq News.

The mountain of garbage, as he called it, “is full of ashes and dust and soot, and that’s going to rise as we stir it, there’s no doubt about that.”