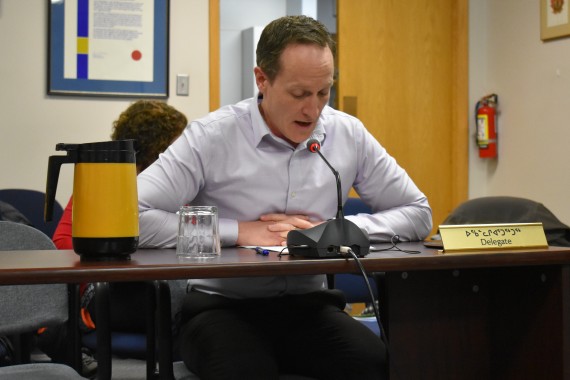 Iqaluit city council has decided to assume ownership of a reverse osmosis filtration system that the Government of Nunavut has stored in Alberta. Matthew Hamp, the city’s director of public works, is seen here pitching the device as a backup plan, in case the city isn’t able to pump enough water from the Apex River to Lake Geraldine to carry the city through the winter. (PHOTO BY COURTNEY EDGAR)

Iqaluit might turn to making salt water drinkable this winter.

City council decided on Tuesday to get a reverse osmosis filtration system as a backup plan to ensure Iqaluit’s water needs are met before the spring thaw. The machine would make sea water drinkable by removing the salt along with other minerals.

“If we get a dry September and October, we may not meet our target,” said Matthew Hamp, the city’s director of public works.

“Should there be a major and sudden rise in water intake in the winter … the city currently has no contingency plan to supplement the water,” Hamp said, after an update from the city’s task force on the Lake Geraldine water supply.

The task force was set up in late July, when the city of Iqaluit announced that due to low precipitation this year, the water supply would likely not last through the winter.

At that time, the city asked residents to reduce their water consumption by opting for showers rather than baths and not washing their vehicles.

Supplementary pumping started in Apex on Aug. 19 to divert water to Lake Geraldine.

Currently, Lake Geraldine is 110 metres deep, after 10 days of pumping. But, according to the task force update, the reservoir should stay at a minimum of 110.8 metres to 111.3 metres to ensure the city can meet demand over the nine months after open-water season ends.

Although the supplementary pumping and recent rain have raised the reservoir level, no one can predict the precipitation for the next month or two before the lake freezes and no more water can be stored.

In an effort to curb water use, the city plans to increase its water conservation campaign over the next few months.

The end of the open-water season, when Lake Geraldine freezes, can happen any time between October and November. And if there is another dump fire or other mishap like a burst main or a problem with the pumping hoses, the city may run out of water before the thaw.

“We can’t consider where we are today because there will be another month of water demand and hydraulic losses,” said Dixon Weir, a municipal water systems expert hired by the city.

Additionally, if Iqaluit does not get enough rain before the freeze, the Apex River might not have enough water to feed the pumping, Weir said, adding that these kinds of issues “tend to compound themselves.”

But 300,000 cubic metres are needed in total. And there are fewer than 60 days of pumping left.

Given the uncertainty over whether this goal can be met, Hamp proposed to council that the city prepare a contingency plan.

The Government of Nunavut owns a reverse osmosis machine that has only previously been used in 2011, when Arviat needed it. The GN offered ownership of it to the City of Iqaluit, Hamp said.

But the city is still on the hook for retrofitting, repairs, equipment and shipping from Alberta.

Council could choose to get the reverse osmosis machine in advance, or to set aside money to prepare for an emergency when it might require the machine at a later date. Another option was to create a different backup plan.

Waiting until an emergency would increase shipping costs, since the machine would have to be flown in, if not ordered by sealift soon.

By air, it would cost between $600,000 and $1 million, depending on the number of shipments required for the massive machine, which is currently stored in one 20-foot and three 40-foot sea cans.

Opting for the reverse osmosis system now by sealift would bring the total cost to $846,000. But, since the city has already paid $280,000 on retrofitting and repairs, the remaining cost to sealift it in advance is $566,000.

Of the four city councillors who were present at Tuesday’s meeting, only Joanasie Akumalik voted against the motion to get the reverse osmosis machine on the sealift before winter.

A few years ago, the city faced a similar decision, when it spent millions to put out a dump fire, councillor Romeyn Stevenson said before voting in favour.

“This dilemma is far more significant to the health … of the citizens of Iqaluit,” Stevenson said.

“If we were to make a mistake or something were to happen that was not foreseen and we had not purchased this, we’d be putting our citizens in a place of risk I am not willing to accept.”