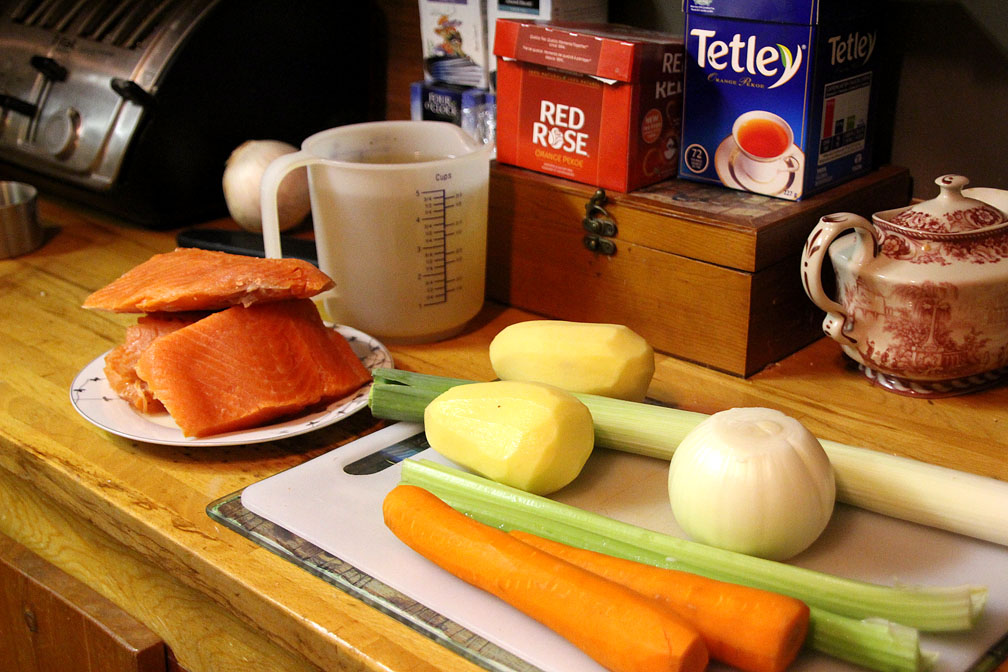 These ingredients will feed between six and eight people. 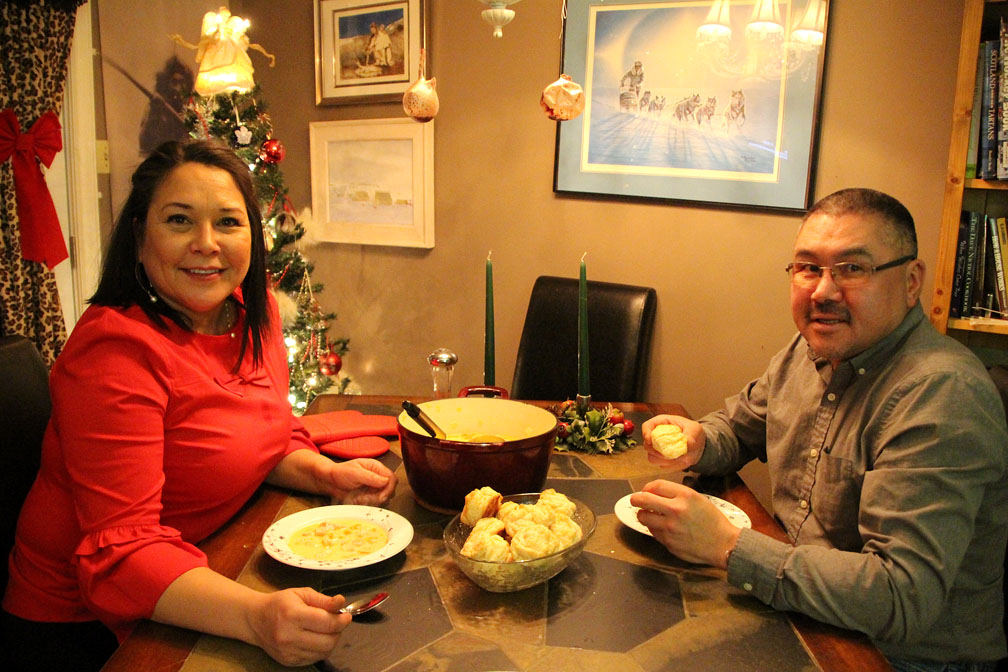 Lumsden and her fiancé, Johnny Flaherty, sit down to enjoy a tasty treat. 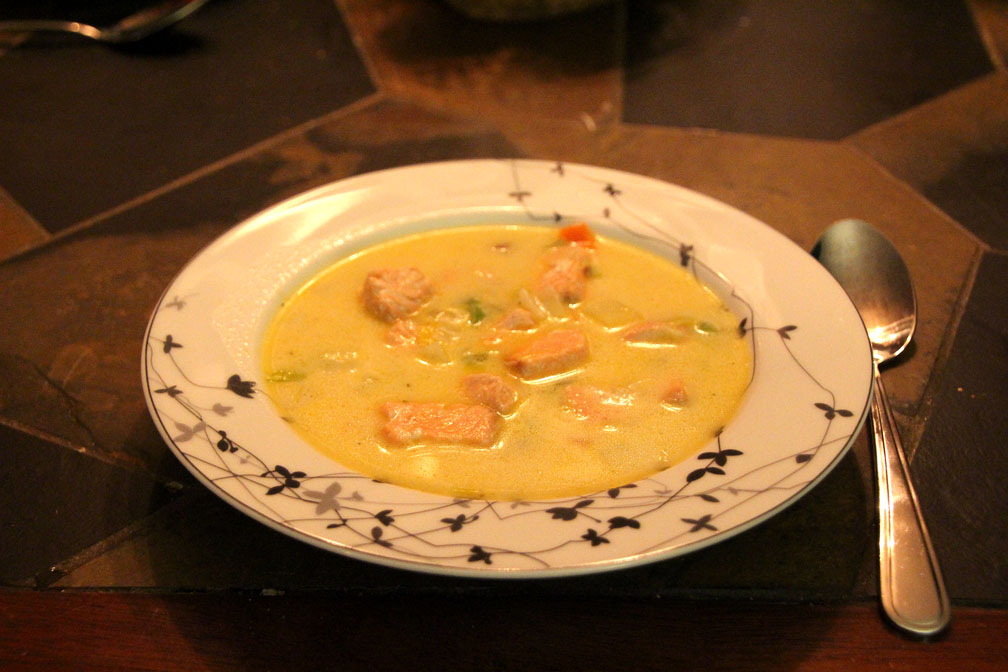 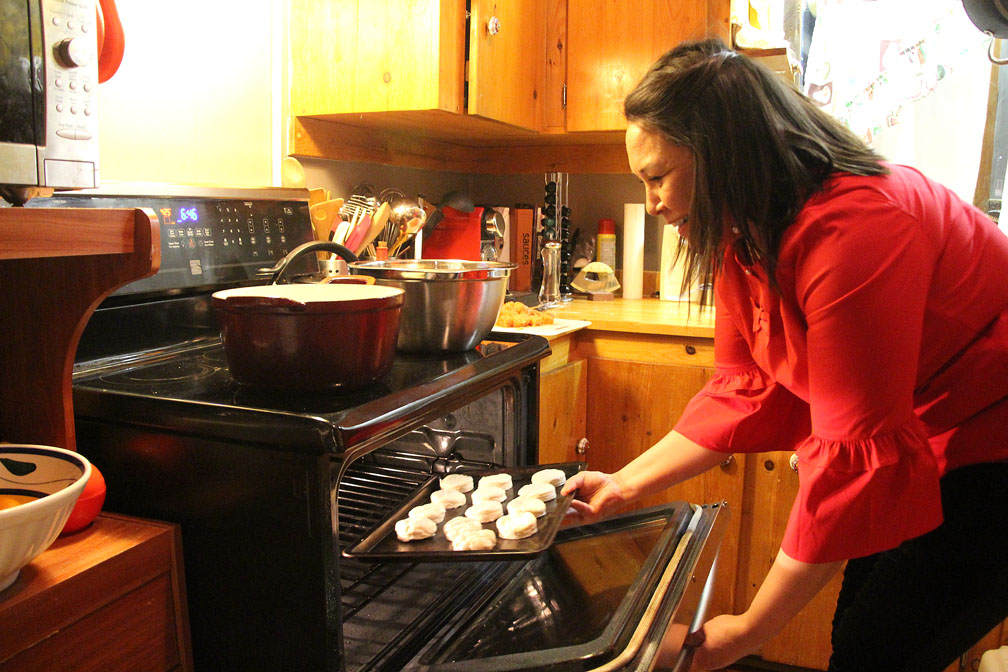 Sheila Lumsden puts her yummy bannocks into the oven. You can find her bannock recipe near the end of this story. (PHOTOS BY BETH BROWN)

Sheila Lumsden carefully removes the pin bones from a quartered fillet of Arctic char, so that the sharp spinal shards don’t end up in her waterzooi.

“Waterzooi” is a traditional Belgian stew that can be made with chicken, or any kind of fish.

But Lumsden’s recipe uses Arctic char, bringing—as she does with many of her dishes—a Nunavut flare into fine cuisine.

“I like focusing on country food. I like featuring that wherever and whenever possible,” the popular Iqaluit chef said. “There is a demand for that and I’m happy to meet that demand.”

It’s a weekday evening in Lumsden’s Lower Base home, where she is set up to do a how-to for Nunatsiaq News on this favourite family dish that she’s taken from the books of her sister’s mother-in-law.

The Christmas tree is up and soft carols play in the background as she chops up one white onion, two carrots, a potato, a set of celery stalks and half a leek that was on sale at Northmart.

Though if you don’t have all that on hand, the only veggies you really need for the waterzooi are onion, carrots and celery, she said.

It is, however, important to dice those vegetables finely, and in a similar size, so that they cook through quickly and evenly. A sharp knife or ulu—and a bit of patience—make this job much easier, Lumsden said.

Time is rarely a concern for Lumsden when she’s in her “zone,” also known as the kitchen.

But she did choose this recipe because it doesn’t take too long to whip up, and the ingredients are common in most kitchens.

“This recipe came to mind because it’s very simple and it’s very affordable to make. It’s really fast once you have everything prepped,” she said.

“To feed a family of six, you’re looking at about $20. That’s good for Nunavut.”

Tonight, Lumsden is using a store-bought vegetable broth as a base for the light, creamy soup, but qajuq—the broth made from boiling char or caribou into uujuq—tastes better and is more economical, she said.

As Iqaluit’s one-time Master Chef contestant, Lumsden is known for her sushi, cinnamon rolls and maple-smoked Arctic char. These treats that all sell out in minutes on the Iqaluit Sell/Swap Facebook page.

She’s also been known to cook for the royal family, the commissioner of Nunavut and territorial politicians.

Despite that, the culinary whiz said she’s honoured to be sharing a recipe—something she calls a piece of herself—for Nunavummiut to enjoy over the holidays.

And while enlightening people’s palates is Lumsden’s preferred pastime, she said she has had to turn down a lot of catering requests of late, because she doesn’t have the time or space to keep up with the food orders Iqalungmiut are asking for.

“We have a home-based food business that Johnny and I want to pursue,” Lumsden said, speaking of her fiancé.

The at-home catering company will be called “Sijjakkut,” meaning, “by the seashore.”

Sijjakkut is also the name of her favourite Inuktitut song, and suits her Lower Base residence, which looks out over Frobisher Bay.

It’ll be baby-steps at first, while Lumsden and her fiancé Johnny Flaherty get set up to become small business owners.

But some day she wants to have a full professional kitchen with a long chef’s table, where she can host exclusive dinners for clients.

Until then, you’ll have to have her come to your own home or event location to cater small gatherings, business dinners and parties.

As for her show-stopping waterzooi, all ingredients, measurements and directions for the dish are listed below.

There’s also Lumsden’s go-to palaugaaq recipe—a flaky, butter-filled bannock that will help you make sure there’s not a drop of char-infused broth left in your bowl.

Really—as Nunatsiaq News confirmed—your biggest dilemma will be whether or not to savour the soup, or eat it extra fast, so that you don’t miss out on a second serving.

• Everything should be prepared and cut ahead of time. This is commonly known as “mise en place.”

• Arctic char can be substituted with turbot, Arctic cod or a combination of different seafood like clams or maktaaq.

• Remember to reduce the heat when you’re ready to add the char, “you want to poach the fish, not boil it,” Lumsden said.

• Be careful not to overcook the char, so that it keeps its flavour and consistency.

• You can use a mixture of cream and milk to get more flavour without all the calories.

• Feel free to include other vegetables.

In a big pot and on medium-high heat, melt the butter and add all diced vegetables. Stir regularly, cooking vegetables until they are almost soft, for five to seven minutes. Then, sprinkle with salt and pepper.

Add the qajuq or vegetable broth and bring to a light boil. Turn the heat down to medium-low.

Add cream or milk and cook for two minutes longer.

In a medium bowl, add:

To do this, Lumsden uses two blunt knives, which are simpler to use than a pastry cutter, she said, and keep the dough from being overworked when kneading.

Make a well in the bowl and quickly add 1 cup of milk.

Place the dough on a floured surface and knead gently (handle as little as possible).

Roll the dough out to 1/2 in. of thickness and use a biscuit cutter to make individual bannock pieces.

Place the pieces on a cookie sheet and bake for 13 to 15 minutes until golden brown on top.