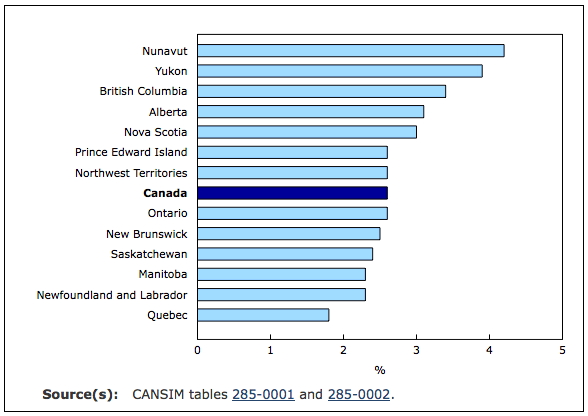 Nunavut has the highest job vacancy rate among all the provinces and territories in Canada. (STATISTICS CANADA GRAPH)

Job vacancy rates in Nunavut are the highest in the country, according to new data released by Statistics Canada Feb. 11.

The figures come from StatsCan’s Job Vacancy and Wage Survey and refers to the third quarter of 2015, ending in September of that year.

According to StatsCan, 4.2 per cent of available jobs remained unfilled in Nunavut, compared to the national job vacancy average of 2.6 per cent.

“Of the 10 economic regions with the highest job vacancy rates in Canada, nine were in the western provinces or in the territories,” the report said.

At 3.9 per cent, Yukon had the second highest job vacancy rate of the 76 economic regions into which Canada has been divided for the purpose of the study.

“Job vacancy rate refers to the share of jobs that are unfilled out of all payroll jobs available,” StatsCan said.

According to the Government of Nunavut’s latest statistics, the GN — which is the territory’s largest employer — is operating at just under three-quarters capacity.

That means that as of June 2015, roughly one quarter of GN jobs remain unfilled.

The GN’s website says that Nunavut’s unemployment rate, averaged over three months ending in January, stands at 16.2 per cent. That means about one of every six Nunavummiut is unemployed.

That’s more than double the national average, according to StatsCan, which is 7.2 per cent.