M’Clintock polar bear survey wraps up for 2014, Nunavut board to ponder quota

“Blizzards, we had fog — we had to sleep in the helicopter, on the sea ice one night, because we couldn’t fly anywhere” 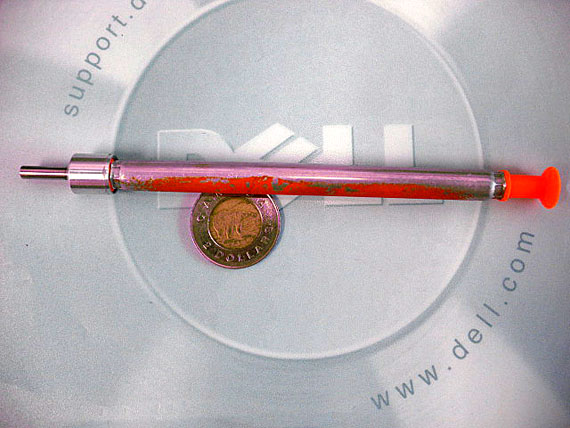 Here’s a close-up shot of the small biopsy dart that the Government of Nunavut used in its M’Clintock Channel polar bear survey. (PHOTO COURTESY OF MARKUS DYCK) 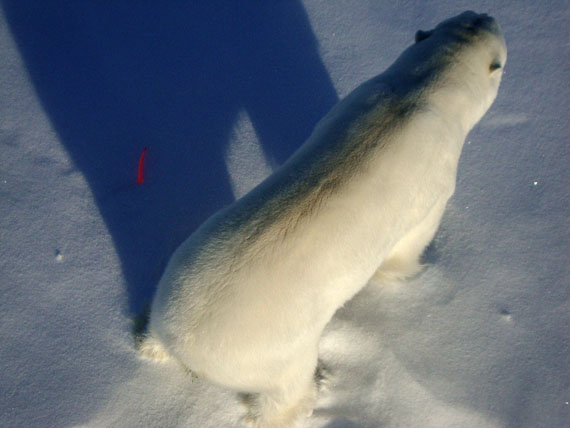 This photo, taken in 2012 from a helicopter flying over Kane Basin, shows a polar bear with a small biopsy dart on the snow beside it. (PHOTO BY MARKUS DYCK)

The first part of a three-year survey to estimate Nunavut’s M’Clintock Channel polar bear population wrapped up earlier this summer — but not without some adventure and lots of bad weather.

So, now it’s up to the Nunavut Wildlife Management Board whether or not to recommend an increased quota for the polar bear hunt in the M’Clintock Channel, which separates the Prince of Wales Island and Victoria Island in Nunavut’s Kitikmeot region.

During the 2014 season, the Government of Nunavut’s survey team experienced some terrible weather.

“Blizzards, we had fog — we had to sleep in the helicopter, on the sea ice one night, because we couldn’t fly anywhere,” Markus Dyck, senior polar bear biologist with the GN, told Nunatsiaq News Sept. 5.

Dyck said he had planned to start the population survey in mid-April but the helicopter, which was stationed up in the High Arctic, couldn’t fly down until early May because of bad weather.

“The helicopter tried and tried and tried [to fly south],” Dyck said. “Usually after an hour, they had to turn around because it was too foggy, or there was freezing rain, or a blizzard.”

Still, Dyck, who had expected some bad weather when he planned the survey, was able to cover 75 per cent of the survey area. With the help of guides from local hunting and trapping organizations from a number of Kitikmeot communities, the surveyors encountered more than 150 polar bears.

A relatively new non-invasive method of tagging polar bears was used, called biopsy darting. This method, first used in 2011, uses a low-flying helicopter. When a polar bear is spotted, someone on board the helicopter shoots out a dart, which quickly falls out.

“The dart hits the [polar] bear in the bum, bounces out, and what you have is a tiny piece of skin which is the size of a lentil,” Dyck said.

Researchers are currently analyzing these samples to identify and log individual bears.

“Before, you had to identify individual bears by using ear tags or tattoos,” Dyck said.

As for the M’Clintock Channel, the size of its polar bear population has been under debate for years.

The Kitikmeot Regional Wildlife Board submitted an application in May 2013 to the Nunavut Wildlife Management Board to ask for an increase in the quota for the population, which has been set at three bears per season since 2005.

That was after a noted decline in polar bears led to a moratorium of polar bear hunts after 2001.

But in its application to the NWMB in May 2013, the Kitikmeot regional board said that three polar-bear quota was set too low, putting a social strain on communities. The management board asked for an additional 15 polar bears per season.

The NWMB held a series of public consultations in Cambridge Bay in June 2014 to help decide if that quota should be increased.

Ben Kovic, chair of the NWMB, told Nunatsiaq News Sept. 8 that the board plans to make an initial decision at its quarterly meeting Sept. 16.

“We’ll carefully consider evidence and arguments presented at the public hearings,” Kovic said, but added that territorial environment minister Johnny Mike, has to then respond to the decision, hopefully by December.

Mike could approve, reject or make changes to the decision, Kovic said.

“It could still take a while,” Kovic said, adding if the quota is changed it could take effect this hunting season, which ends June 30, 2015.

But Dyck said until the biopsy darting survey is done — planned for two more seasons — nobody really knows how many polar bears are in the M’Clintock population.

“The first real estimate…doesn’t happen until after the second field season,” Dyck said.