“It’s vital for their healing that they do find out” 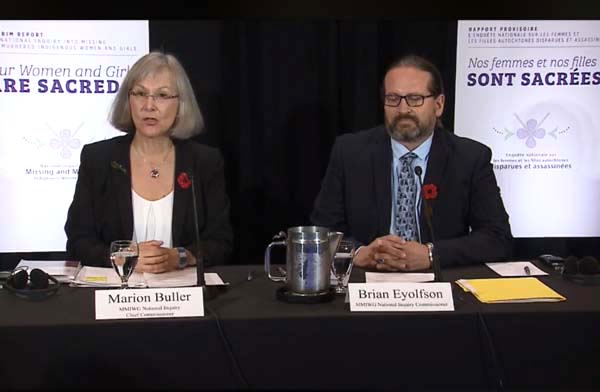 Marion Buller, chief commissioner of the National Inquiry in Missing and Murdered Indigenous Women, and commissioner Brian Eyolfson at a press conference held in Ottawa Nov. 1 to announce the release of the commissioner’s interim report, broadcast live on its Facebook page.

The National Inquiry into Missing and Murdered Women and Girls released its interim report in Ottawa Nov. 1, which, among other recommendations, called on the Trudeau government to help create a national police task force to reopen or review cases.

Rather than make proposals based on the testimony it has gathered so far, the commission used the report to ask the federal government for more time and more collaboration to support its two-year mandate.

“With [this] interim report, we are able to reflect on what we have learned after months of research and the living experience of establishing an inquiry of this magnitude,” said Marion Buller, the inquiry’s chief commissioner.

“Our women, girls and two-spirited people and their families continue to suffer from violence today and we know that they are re-traumatized as they tell their stories to us. That is why this interim report calls for the immediate increased support both financially and for counselling services for families and survivors.”

Now a year into its two-year mandate, the commission is examining and reporting on the systemic causes of all forms of violence against Indigenous women and girls in Canada by looking at patterns and underlying factors.

As it stands, the inquiry doesn’t have the mandate to investigate or re-open cases; it could only refer newly gathered evidence back to police forces.

So the commissioners want Ottawa to collaborate with the provinces and territories to create a national police task force, to which the inquiry could refer files when new information is revealed over the course of its work.

The task force would have the ability to review cold cases, if the federal government agrees to it, Buller said.

Buller told a Nov. 1 news conference that many survivors and their families are desperate to understand what happened to their loved ones and why investigations couldn’t provide those answers.

“It’s vital for their healing that they do find out,” she said Nov. 1.

The 118-page report, titled Our Women and Girls are Sacred, also called for:

• a commemoration fund in collaboration with families, survivors and Indigenous organizations to support events and initiatives to honour missing and murdered Indigenous women and girls and LGBTQ2S people

Commissioners have alluded to, but have not officially asked for, an extension to their two-year mandate, which would end in late 2018.

The national inquiry said to date that more than 900 survivors have stepped forward to share their stories. Commissioners have only just began hosting community hearings this fall, though they’ve gathered 269 testimonies over three hearings.

The inquiry is scheduled to hold six more hearings before the end of the year, including one in Rankin Inlet on Dec. 11.