The signatories of a new treaty to prevent unregulated fishing in the Central Arctic Ocean stand together Oct. 3 after the official signing ceremony in Ilulissat, Greenland. The legally binding agreement has been signed by Greenland, Canada, China, the European Union, the Faroe Islands, Iceland, Japan, Norway, Russian Federation, South Korea and the United States. (PHOTO COURTESY OF THE MINISTRY OF FOREIGN AFFAIRS/GREENLAND) 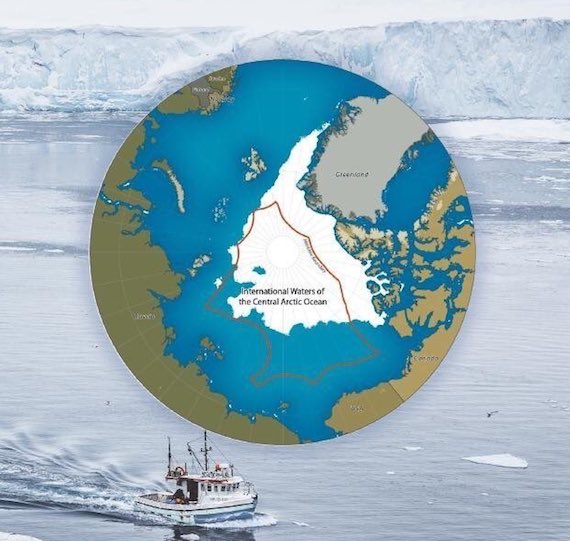 This map shows the area covered by new agreement to prevent unregulated commercial fishing in the Central Arctic Ocean. The image is from the program of the signing ceremony in Greenland.

A landmark treaty signed today in Greenland will help to protect vulnerable fisheries in the Arctic Ocean.

The agreement will be signed in Ilulissat by representatives of Canada, China, Denmark for the Faroe Islands and Greenland, Iceland, Japan, Korea, Norway, Russia, the United States and the European Union.

Their move follows an agreement in principle reached last November to stop commercial fishing in the Central Arctic Ocean for at least the next 16 years, while scientists try to understand the size and health of the region’s fish populations.

It’s an important agreement, said Trevor Taylor, vice-president of conservation for the non-profit group, Oceans North. Taylor, who is based in Iqaluit, lobbied for the deal over the last eight years.

“This is the first time in the history of fisheries management that an agreement not to fish has been done,” he said. “It’s the first time we’ve made a pre-emptive measure.”

The treaty’s goal is to protect the Central Arctic Ocean, where shrinking sea ice could draw in factory-fishing trawlers to plunder fish stocks. These waters include those off Nunavut’s Ellesmere and Axel Heiberg islands.

The Central Arctic Ocean is sometimes described as a “doughnut hole” at the top of the world, because these international waters, which lie 200 miles off any coastline, are beyond the control of any Arctic nation. For now, the area remains unfished.

Without today’s agreement, you could easily see see big trawlers heading north to scoop up Arctic cod, in an unsustainable, “hit-and-run” kind of fishing, Taylor said.

And if these fish stocks are depleted, it could destroy the underpinning of marine mammals’ diets, he said.

So that’s why the agreement, called “an agreement to prevent unregulated high seas fisheries in the Central Arctic Ocean,” is important to Inuit who live along the Arctic coast, especially in the western Arctic, where the biggest impact of unrestricted fishing would be felt, Taylor said.

Inuit were part of Canada’s negotiating team, he said, and they made sure their views were heard.

“I think they had a major impact on the outcome,” he said. “They’re the ones who would be on the front lines of a fishing effort.”

Signatories include Canada’s ambassador to Denmark, Emi Furuya, on behalf of Canada.

A study by Ocean Conservancy, another environmental advocacy group, on sea ice extent and thickness in the Central Arctic Ocean finds that the agreement is being signed just in time.

At the same time, the amount of open water each September between 2010 and 2017 reached about 22 per cent as compared to only one per cent in the 1980s.

“This agreement is being signed just in time for this newly accessible sea. Arctic sea ice is no longer a year-round barrier to the Central Arctic Ocean, so this agreement to send in scientists before commercial fishing ships is a promising sign for the Arctic’s future,” said Henry Huntington, Arctic science director for Ocean Conservancy.

The Simon Foundation, a think tank, said the new agreement could also improve future security co-operation and prevent militarization in the Arctic.

That’s because it “bolsters hopes that the logic of cooperation in support of public safety, environmental protection, and responsible resource extraction will increasingly spill over into security cooperation in the global commons of the Arctic high seas.”