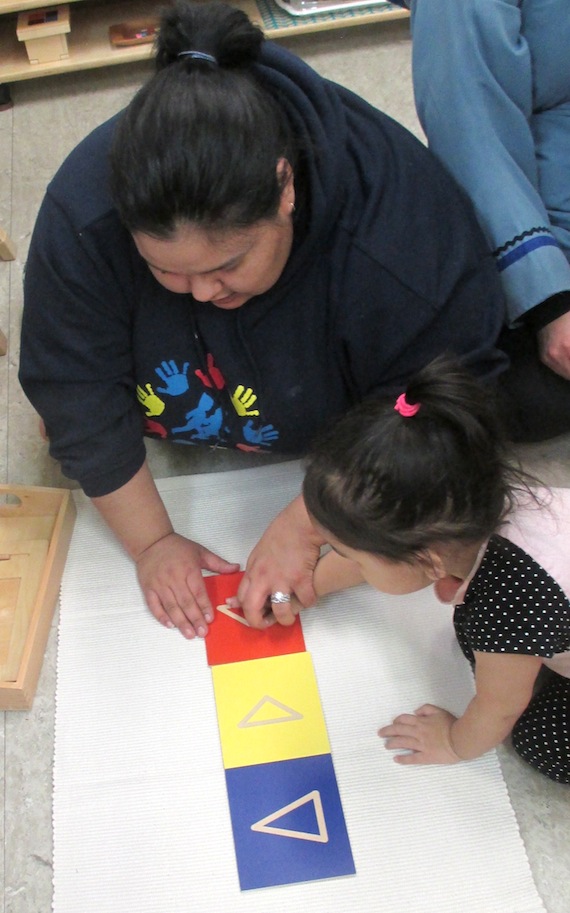 By running her fingers along these syllabic shapes in sandpaper, this little girl will get a feel for the shapes and learn to recognize them, much before she is ready to attend kindergarten. 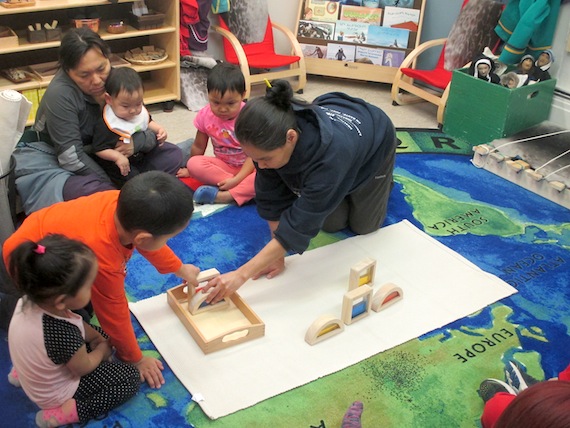 Children play with shapes that will later help them with skills needed to succeed in school and life at Nunavut preschools in Pond Inlet and Clyde River. Both preschools combine the educational principles of Inuit Qaujimajatuqangit and Maria Montessori. (PHOTOS COURTESY OF PIRURVIK PRESCHOOL) 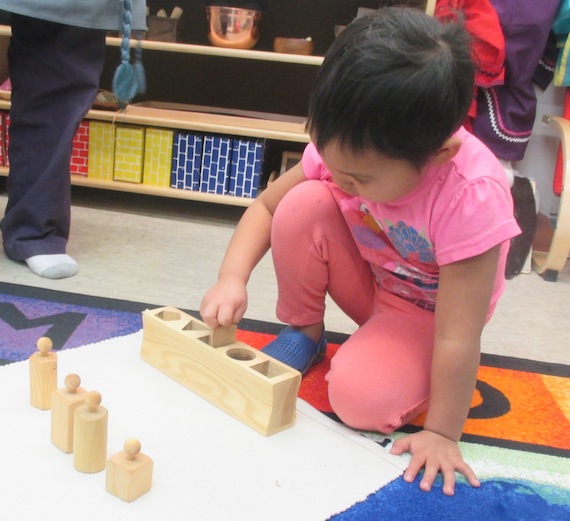 By learning how to fit these pegs in the proper holes, this girl at the Ilisaqsivik preschool will learn how to recognize the difference between a square and a circle, among others. 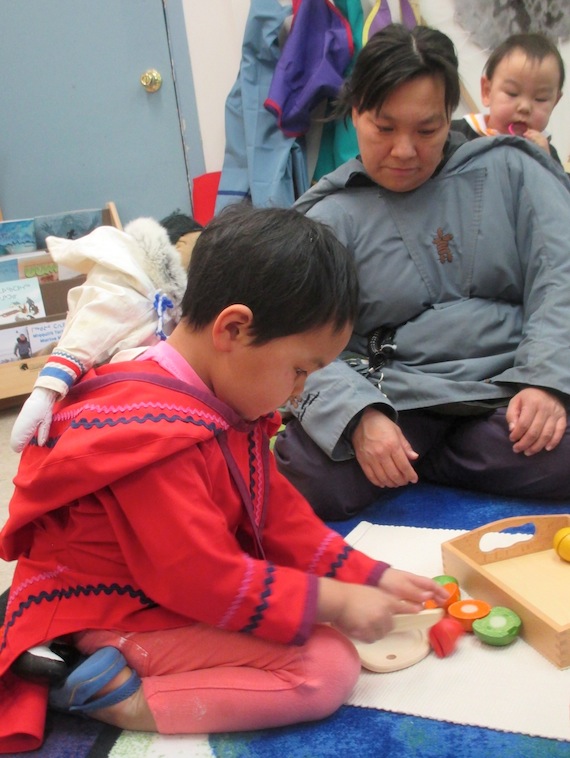 A young girl wearing an amautik cuts up a wooden apple at the Ilisaqsivik preschool, in an activity that builds co-ordination and confidence.

When you enter the children’s room at Clyde River’s Ilisaqsivik Society, you may wish to whisper: you’ll find everything is quiet, although several young children are around the room, engrossed in play.

The children, accompanied by a parent or guardian, are engaged in activities using equipment that doesn’t look anything like the bright-coloured plastic toys usually found in child care centres.

Instead, in the Ilisaqsivik preschool, you see things like sticks, spindle boxes and cylinder blocks, which are designed to help develop math skills later, and dressing frames, with buttons, snaps, laces and zippers, which allow children to work on practical life skills they need to dress themselves.

The novel array of equipment is inspired by Inuit Qaujimaqatuqangit and the educational principles of the Italian educator Maria Montessori, who believed that, by working independently, children become self-motivated and reach new levels of understanding.

Montessori died in 1952, but her educational theories, now enshrined in Montessori schools around the world, appear to be a good match for IQ’s Pilimmaksarniq principle, which calls for children to be allowed to learn at their own pace.

At the Ilisaqsivik preschool you also can find many pint-sized cultural materials available for the children. These include a small qamutik for them to learn how to tie-up, a sealskin tent with a qulliq for them to play with inside, drums, sealskin stretching boards, amautiit and parkas, toy qamutiit, string games, finger puppets, bone games, hand-pull games, sealskin scraping activities and wooden dolls.

The linkage between IQ and Montessori in Clyde River has been made possible thanks to a new, centre-to-centre educational exchange between Ilisaqsivik and Pond Inlet’s Pirurvik Preschool which has operated on the same mixed educational foundation since January 2016.

The goal of this early childhood education program, says Pirurvik Preschool’s co-director and founder Tessa Lochhead, is to provide a culturally relevant learning experience based on the IQ principles and enriched by the use of Montessori materials.

Language development is key to this program, Lochhead said. So the preschools, in Pond Inlet and Clyde River, offer materials that aim to promote and enrich Inuktitut literacy.

To prepare for learning to read later on, children learn Inuktitut syllabics, where each character represents an entire syllable, usually a consonant followed by a vowel, in a variety of ways.

They can run their fingers over syllabics cut out of sandpaper to help learn the shapes. They can also rearrange large and small syllabics cut from wood. Or they can hit bags which produce some of the common sounds—”i, pi, ti”‘s—made while learning syllabics in Inuktitut.

Before the preschool opened at Ilisaqsivik, with the support of Nunavut Tunngavik Inc.’s Makigiaqta Inuit Training Corp. and the Qikiqtani Inuit Association, the Ilisaqsivik child care staff flew to Pond Inlet for one week to see how the IQ-Montessori preschool program worked and then received trained by the Pirurvik Preschool staff members back in Clyde River.

About six children and their parents now participate in Ilisaqsivik’s afternoon program.

Teacher Kelly Arnakak says they’re just starting to learn to use the equipment—but that the children “especially like to play with the water”—that is, using sponges to wipe counters or wash dishes, which is typical of the real-life activities that Montessori encouraged.

“Awesome” is how another teacher, Aileen Kadloo, summed up the first two weeks of the preschool program to Nunatsiaq News.

Ilisaqsivik’s executive director, Jake Gearheard, admitted that Montessori is “new to us.”

“But it seems to fit really well with IQ. It seems like play and it seems like the kids are curious: they’re playing but they’re actually learning,” he said.

Thanks to money from the QIA, Ilisaqsivik’s preschool program will be able to run next year, too.

“I’m super-excited a year from now what kindergarten instructors say about the kids who have been through the Montessori program,” Gearheard said.

Adding a new program such as the IQ-Montessori pre-school is a challenge for Ilisaqsivik because the community-based wellness centre has no core funding—but still manages to offer health, wellness and literacy programs, access to computers, counselling and many other programs through roughly 70 contribution agreements.

Every year involves a lot of risk-taking for Ilisaqsivik because they have to run projects and hire people before they receive confirmation that they’ll get money to pay for it.

In 2004-5 when the centre was falling into debt, Ilisaqsivik launched a fundraising campaign and survived.

“We’re in the exact same position as 2004. Every year is a new year, ” Gearheard said. “I’m like a broken record. They know Ilisaqsivik is a good thing but we just can’t convince politicians to actually make a commitment to core funding.”

For Ilisaqsivik, it’s a bonus to know that the new preschool program will continue through next year, due to a guarantee of funding from the QIA to pay the three teachers’s salaries until then. 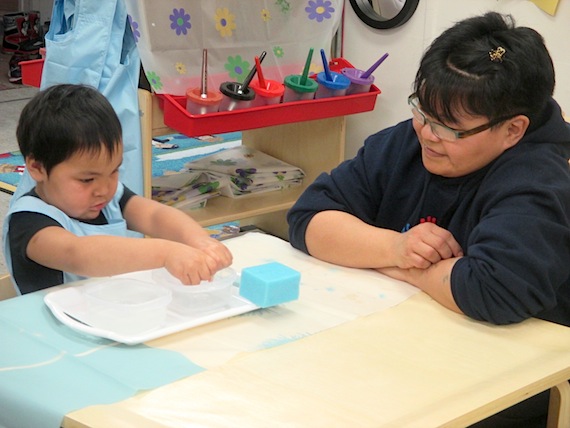 Playing with water—and learning about water—is one of the favourite activities of children at the Ilisaqsivik preschool.