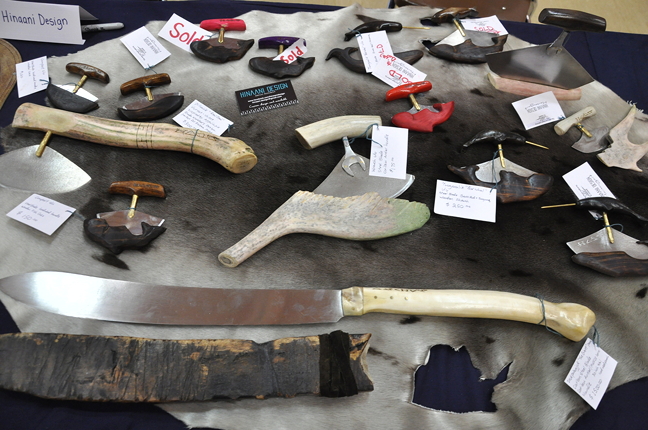 Ulus and panas by Hinaani Design on display during the KTS art market Sept. 27. (PHOTOS BY THOMAS ROHNER) 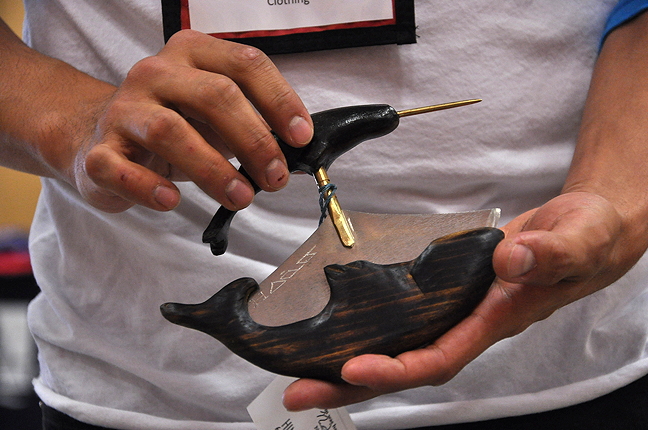 One of Hinaani Design’s ulus. Keenan Lindell, one of three members of the Arviat-based company, likes to make his products unique, but functional. “My aunt says women like to have ulus nobody else has, so I try to make them unique,” says Lindell. “But I prefer people use the ulus, not just for decoration.” 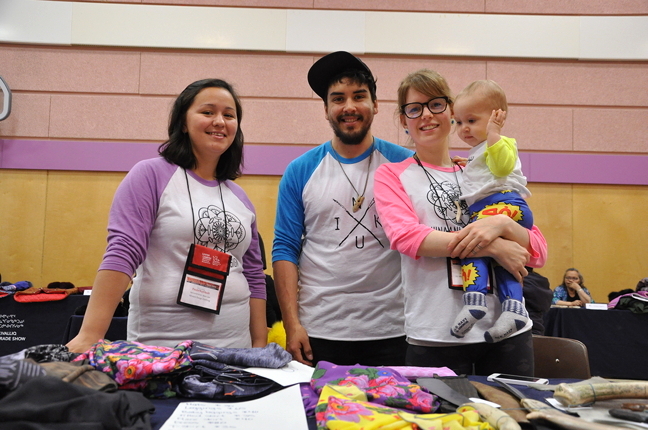 RANKIN INLET—Keenan Lindell spends a lot of time with elders in his hometown of Arviat to improve his artistic skills.

“Elders know a lot more than I do so I hang out at the elder’s centre back home and ask for advice and input,” Lindell said Sept. 27 from the Simon Alaittuq School in Rankin Inlet.

Hinaani Design, the company started about a year ago by Lindell and two other young entrepreneurs, stole the spotlight at the Kivalliq Trade Show, which ran from Sept. 26 to 28.

Their booth at the art market Sept. 27 was among the busiest, their clothing was featured in the fashion show that same night, and the three young entrepreneurs were singled out for recognition at the Sept. 28 closing gala.

Hinaani Design, comprised of Lindell, his common-law partner Emma Kreuger, and Paula Rumbolt, was touted by trade show organizers as a success story, after the trio participated in a young entrepreneurial workshop at the annual show the previous year.

The word “Hinaani” means “at the floe edge,” Lindell explained.

The trio, who hail from Arviat and Baker Lake, wanted to use an Inuktitut name specific to their hometown dialects.

Lindell, who does some pattern design for Hinaani’s clothing, focuses mostly on crafting ulus and panas, which are long curved knives traditionally used in Igloo building.

Many of Lindell’s ulus have ornately carved sheaths made of caribou antlers or wood scavenged from palettes.

“My aunt says women like to have ulus nobody else has, so I try to make them unique. But I prefer people use the ulus, not just for decoration,” Lindell said.

His panas, given names like “Bad to the Bone,” “the giant,” and “Pilluavik,” which means “real deal,” have handles carved from caribou antler, wood and muskox horns.

He brings his ulus and panas to his grandparents and other local elders to ask advice on how to improve their design and usefulness.

At the art market Sept. 27, expert igloo builder Solomon Awa from Iqaluit had a booth just behind Lindell.

“I’m nervous to show him my panas,” Lindell said.

“We noticed that Inuit were buying clothes from down south that had similar but not the same traditional Inuit symbols,” Lindell said, explaining the inspiration for the company.

The young entrepreneurs hope to make it to Iqaluit later this year for the annual Christmas craft fair.

And then the bigger goal: the Northern Lights trade show in Ottawa, traditionally held in January every year.

“Hopefully we make enough noise here that we can go to that show,” said Lindell.