No Nunavut land use plan until 2022, NPC says 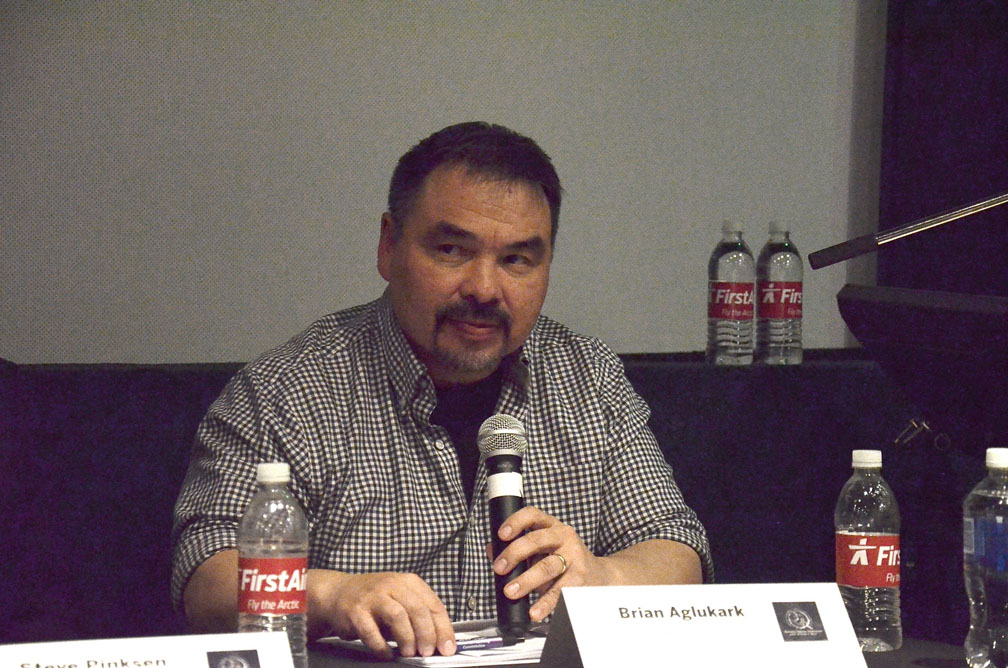 Brian Aglukark, the Nunavut Planning Commission’s director of policy and planning, at a discussion panel held yesterday in Iqaluit at the Nunavut Minining Symposium. (PHOTO BY STEVE DUCHARME)

A long-awaited territory-wide land use plan for Nunavut won’t be ready until at least 2022, an official from the Nunavut Planning Commission declared yesterday, prompting groans from delegates attending a panel at the Nunavut Mining Symposium in Iqaluit.

Brian Aglukark, the NPC’s director of policy and planning, made the announcement at a discussion panel that included officials from the federal and Nunavut governments, as well as the president of the Northwest Territories and Nunavut Chamber of Mines, Gary Vivian.

It’s designed to guide where resource extraction can be allowed within Nunavut, using three land use designations: protected areas, special management areas and mixed use.

But last year, following much criticism heard at a public consultation in Iqaluit that examined the NPC’s most recent draft, released in 2016, the NPC postponed indefinitely two additional public consultations in the Kivalliq and Kitikmeot regions.

In light of the stalled process, what was billed as a moderated discussion on the land use plan by mining symposium organizers became at times a post-mortem on the project’s missed deadlines and stalled dialogue, as well as the lack of a cohesive path forward by the parties.

The Government of Canada, the Government of Nunavut and Nunavut Tunngavik Inc., all must approve the final draft of the land use plan before it can be brought into legal force.

“Its no secret that the Government of Canada, the Government of Nunavut and Nunavut Tunngavik Inc., during the Qikiqtani hearing, expressed concerns about the plan,” said Steven Pinksen, Nunavut’s assistant deputy minister at the Department of Environment.

Pinksen said the NPC arranged a workshop where all parties identified their concerns following the Iqaluit consultation.

At those meetings, Pinksen said the GN called for improved community engagement by the NPC to help municipal governments make submissions, along with the creation of a committee structure that will keep governments and Inuit organizations informed.

Several Nunavut communities, including Iqaluit, did not make submissions to the NPC because they don’t have the capacity to do so and requested more money to help them.

All the panellists appeared to agree that the workshop format is a step in the right direction.

Vivian, speaking on behalf of developers, said any future land use plan must respect the autonomy of Nunavut regulatory bodies, such as the Nunavut Impact Review Board, to guide development.

Vivian expressed opposition to the idea of some lands being designated off-limits to development, or protected, instead of evaluating development in those areas on a proposal-by-proposal basis.

Vivian also reported concerns by some mineral developers that the draft land use plan was being used by some organizations to evaluate current development proposals, despite being a work in progress.

Aglukark categorically denied that accusation, saying the “draft plan is not being use to evaluate any proposal,” and “we have nothing in our records.”

Pinksen added, “I can’t think of any time that [the Department of Environment] ever used it.”

But at least one developer attending the panel said his company has already had to address the draft land use plan in a recent proposal.

That’s because the draft plan was cited during a public comment submission to a NIRB screening application that his company was compelled to answer.

“This plan is not approved, but it is influencing decisions,” said another member in the audience.

Nunavut Premier Paul Quassa, a former chair of the NPC, told the panel that the land use plan is needed, “more than ever, its been going on for so long.”

“I think we cannot dismiss [community] concerns and issues, but at the same time, I know Nunavut was created to be self-sufficient, so sustainable development is something that we all go for.”