“We are not here to laugh at someone and leave” 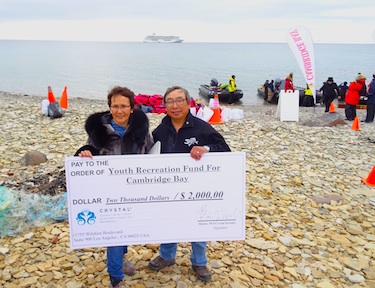 Cambridge Bay Mayor Jeannie Ehaloak and the hamlet’s deputy mayor Joe Ohokannoak pose with a giant cheque made out to the local youth recreation fund by Crystal Cruises, Aug. 29 on the beach, with the huge cruise ship in the background. (PHOTO BY JANE GEORGE) Sample plates offered to cruise passengers in Cambridge Bay provided them with the taste of muskox, Arctic char and berries. (PHOTO BY JANE GEORGE) 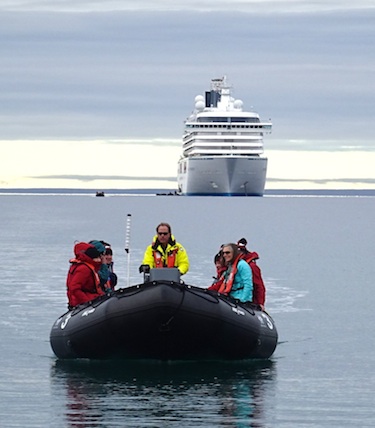 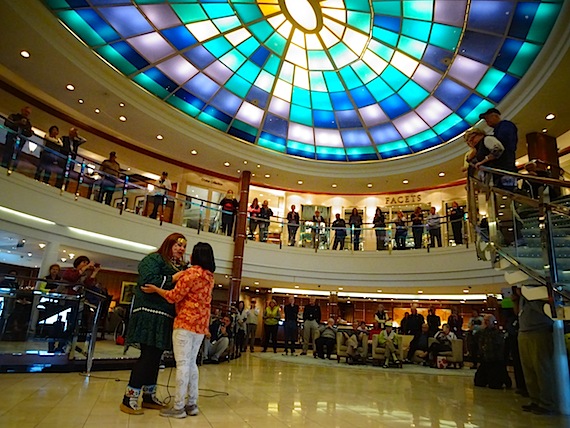 Sarah Jancke and Donna Lyall of Cambridge Bay throat sing Aug. 29 for passengers on board the Crystal Serenity. (PHOTO BY JANE GEORGE)

CAMBRIDGE BAY — Two different worlds met in western Nunavut’s Cambridge Bay Aug. 29, when the huge Crystal Serenity cruise ship — whose population of passengers and crew nearly equals the population of the town — stopped by for the day.

Early in the morning, the first of 1,000 or so passengers disembarked for black zodiacs wearing bright red parkas and heavy black rubber boots onto the stone-covered beach known as Gravel Pit, or Akulailgok in Inuinnaqtun, about 10 kilometres outside Cambridge Bay.

There, the passengers would switch from their Crystal Serenity dining room menu of dishes such as veal cheek with gingered yam, cherries and poppy seed crumble, to a diet of Arctic char soup, bannock, maktaaq, moose and muskox burgers.

But the day-long encounter between Crystal Serenity passengers and the roughly 1,700 residents of Cambridge Bay was a success, said some passengers, who paid a minimum of $22,000 US for berths on the 32-day voyage from Alaska to Greenland and then New York City.

Fresh off the boat, Deb and John Johnson, who grow potatoes on their Pennsylvania farm, wandered into Kiilinik High School, where they admired its airy, modern architecture as well as its many rainbow decorations promoting diversity and tolerance, and spoke to some teachers and students.

From there, the couple paid $25 each for a guided tour of the May Hakongak Library and Cultural Centre, where they sat with executive director Pamela Gross and two students in a sealskin qalvik (qaqqiq) tent to discuss Inuinnait history.

The Johnsons didn’t spend much money during their visit to Cambridge Bay — although in the Northwest Territories’ community of Uluhaktok they said they spent hundreds of dollars on RCMP paraphernalia and a chance to meet — and be photographed with — a real Canadian Mountie.

The Nunavut Arts Fair in Cambridge Bay was busy, but no one was buying sealskin, which can’t be brought back to the United States, or some of the more expensive items.

Cambridge Bay artist Elizabeth Hadlari said that cruise ship passengers, who are often tight with their money, might have preferred a studio tour to an art fair.

“Then, they see this thing, they meet the artists, [and] they can take home a little piece of the creative Arctic with them,” Hadlari said. “If you have the right thing, money flows easily.”

Some passengers made unsolicited contributions as they walked around town — about $500 in the offering plate at St. George’s Anglican Church — along with a $2,000 cheque from the Crystal Cruises company to the local recreation fund. In all, they would spend about $100,000, including $48,000 at the arts fair.

But the day was not all about money. One passenger, who has travelled widely, said the warm welcome she received from people in Cambridge Bay showed this is a community that pulls together.

Some from the community also ventured onto the sleek Crystal Serenity — all wood, chandeliers, soft carpets and brushed metal surfaces, so passengers could see performances of throat singers, Arctic games and drumming and dancing.

Like those on shore who worked to make sure the cruise ship passengers were happy, Crystal Serenity Capt. Birger Vorland said he wanted to ensure everyone from Cambridge Bay felt well-treated by the ship, its passengers and crew.

And to those who have suggested that the voyage of the Crystal Serenity, through the Arctic and among Inuit, amounts to “extinction tourism,” and that the trip takes advantage of global warming, “you will always have the complaining from big doctorates who criticize everything,” Vorland said.

In Cambridge Bay, at the halfway point of the cruise, its Northwest Passage transit is looking good because there’s little ice — perhaps too little for passengers eager for ice and polar bear sightings, he said.

“But there’s always the off chance that you will discover something that hasn’t been charted: that’s personally my biggest concern. Now is not the time to let your guard down,” Vorland said.

During its voyage, the Crystal Serenity also intends to leave the Arctic as clean as when ship passed through — “crystal clean,” according to John Stoll, Crystal Cruises’ vice president of land programs.

Nothing goes overboard. Garbage is taken off the cruise ship to the RRS Ernest Shackleton, the ship’s icebreaker “shadow ship,” where it’s packed up and frozen to be offloaded in St. John’s, Newfoundland.

Waste water and grey water — about 400 tonnes a day — are treated and released at least three nautical miles from shore, according to Canadian regulations for Arctic waters.

And the ship is voluntarily using low-sulfur fuel to limit climate-warming emissions from its exhaust.

Vorland and Stoll said the Crystal Serenity wants to set a new gold standard for other cruise ships — by more than fulfilling all regulatory requirements, such as a detailed tourism project proposal with the Nunavut Impact Review Board, something other cruises have not always done.

The Crystal Serenity plans a return visit to the Northwest Passage in 2017 and in 2018 with a new, smaller cruise ship, the Crystal Endeavor.

The Crystal Serenity’s visit to Cambridge Bay doesn’t mark the end of Cambridge Bay’s cruise-ship hosting, with private yachts and another cruise ship expected within the next week.