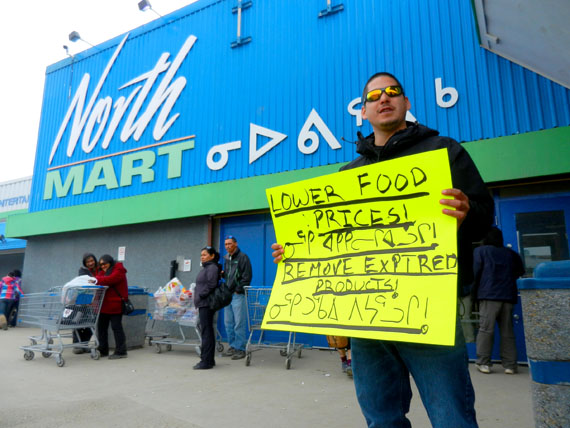 A lone voice. Luc Peter of Iqaluit stands in front of the Iqaluit Northmart store at around 5:15 p.m. May 25, protesting food prices and the sale of expired products. Peter had posted a message on the Iqaluit Public Service Announcement page earlier that day announcing a plan to protest in front of Northmart, but no one else joined him. Despite the low turnout, Peter said that won’t deter him. “I’ll be back,” Peter said. (PHOTO BY JIM BELL)

Small groups of Nunavummiut — and at least one man in Iqaluit — tried to organize boycotts and protests May 25 at food and dry merchandise stores in Nunavut owned by the North West Co., complaining about prices, expiry dates and cheque cashing practices.

But it’s not clear how many people joined these efforts.

The boycott attempts appear to have started at a Coral Harbour protest earlier in the month.

Anonymous Twitter users who appeared to come from Arviat and Rankin Inlet issued calls May 24 on Twitter for a boycott but it’s not clear if they managed to persuade others. No one contacted any news organization and few people responded to any queries.

Luc Peter of Iqaluit tried to use the Facebook page Iqaluit Public Service Announcements to organize a protest, but ended up standing by himself outside the Northmart store, just after 5:00 p.m..

Peter held a sign saying “Lower Food Prices!” and “Remove Expired Products!” He said Baffin Canners’ prices are better than Northmart’s and that everyone should shop there.

Some Nunavut residents put their opinions on social media.

“Maybe because Northmart is the only company that quadruples their prices, making billions off the most food insecure parts in Canada,” read a tweet from Twitter user “Unaapik.”

Despite the boycott, shoppers flooded in and out of the Iqaluit Northmart all day May 25, which is a pay day for Government of Nunavut and federal government workers. Most parking spots were filled by 10 a.m. and a constant stream for traffic moved in and out all day.

Full-time mother Cassandra Galbraith, 19, said she didn’t know about the boycott but might have participated if she had known more about it.

She walked out of the Northmart holding numerous shopping bags.

“I just think it’s a really good idea that somebody’s trying to get the prices lower — it’s way too expensive,” she said. “With housing and stuff too … I think it would be a great way to [lower costs].”

The North West Co. did not return calls to Nunatsiaq News for a comment before time of publication.