Northmart fire one of five overnight in Iqaluit, prompting investigation

City officials say there is no concern about a food shortage 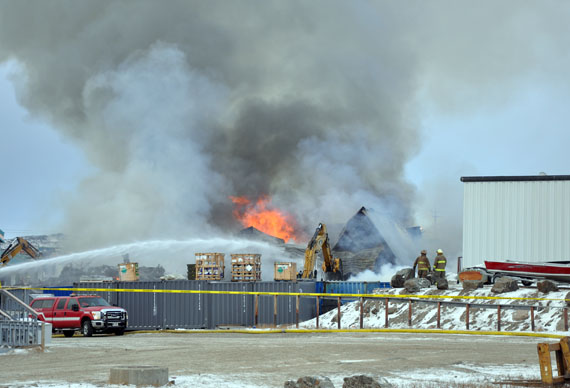 Firefighters said a blaze at Iqaluit’s Northmart store had been contained by mid-morning on Thursday, Nov. 8, although the fire appeared to be flaring up again around noon. (PHOTO BY SARAH ROGERS) 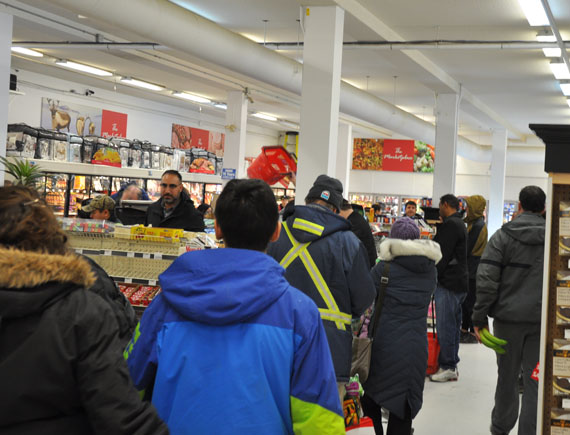 Shoppers flocked to Arctic Ventures Thursday morning to stock up on food items, fearing the Northmart closure could mean shortages in Iqaluit. (PHOTO BY SARAH ROGERS)

The fire at Iqaluit’s Northmart store is one of five blazes that the city’s fire department was called to respond to between Wednesday night and Thursday morning, prompting local police to open an investigation.

But Iqaluit RCMP have not said yet if they suspect arson or a link between the five fires, three of which were started in vehicles and another one in a vacant home.

Firefighters got their first call Wednesday evening at around 10 p.m., said Nelson Johnson, Iqaluit’s deputy fire chief. Crews were called to Northmart at about 1:40 a.m. on Thursday morning, he said.

“At that time, [the fire] was in the garage and loading dock area,” Johnson told a morning news conference at the City of Iqaluit offices.

“It got up into the attic space in the warehouse.”

Sea cans around the building, as well as the main store area, remain unaffected, he said, though the store itself would have sustained some water and smoke damage.

When firefighters arrived, there was a group of Northmart night-time stocking staff at work, Johnson said. That group was evacuated, unharmed, as well as a group of elders whose housing units line the back of the store.

Elders are currently being housed in the city’s Qammaq building, where the local Canadian Red Cross chapter is providing supplies and support for the group.

By about 8 a.m. on Thursday, the fire intensified, leading firefighters to knock down one side of the Northmart warehouse to stop the spread of the blaze to surrounding buildings.

By mid-morning on Thursday, Nelson said the fire had been contained, though small flames began rising from the warehouse again before noon.

A total of 18 local firefighters have been working on the scene of the Northmart fire, while the city said 14 additional firefighters are flying in this afternoon from Pangnirtung and Cape Dorset.

City officials warned residents that the fire will likely continue for some time. They’re asking residents to stay clear of the area to allow responders and water trucks to access the scene.

A section of Queen Elizabeth Way remained closed on Thursday morning, as well as Nakasuk Elementary School, which is located across the street from Northmart.

As rush hour began in Nunavut’s capital, residents flocked to the city’s remaining grocery stores to stock up on items, fearing the Northmart closure could mean a shortage of food.

Arctic Ventures, the city’s other major grocery retailer, opened early and pledged to bring in more food and staff as needed.

Down the road at DJ Specialties, residents said store staff were limiting customers to a certain number of some items, like eggs and milk.

The city’s chief administrative officer, Amy Elgersma, said the city has already been in touch with retailers and can confirm there is enough store space in the community to store food and supplies for Iqaluit’s needs.

“There is no concern that there’ll be a food shortage,” she said on Thursday morning.

“They’ve made arrangements to bring more supplies in. And they’ll make sure residents have access to a steady supply.”

It remains to be seen how Northmart’s closure affects food availability and prices.

“I would hope that our retailers will do the right thing [and] maintain prices and provide the services we need.”