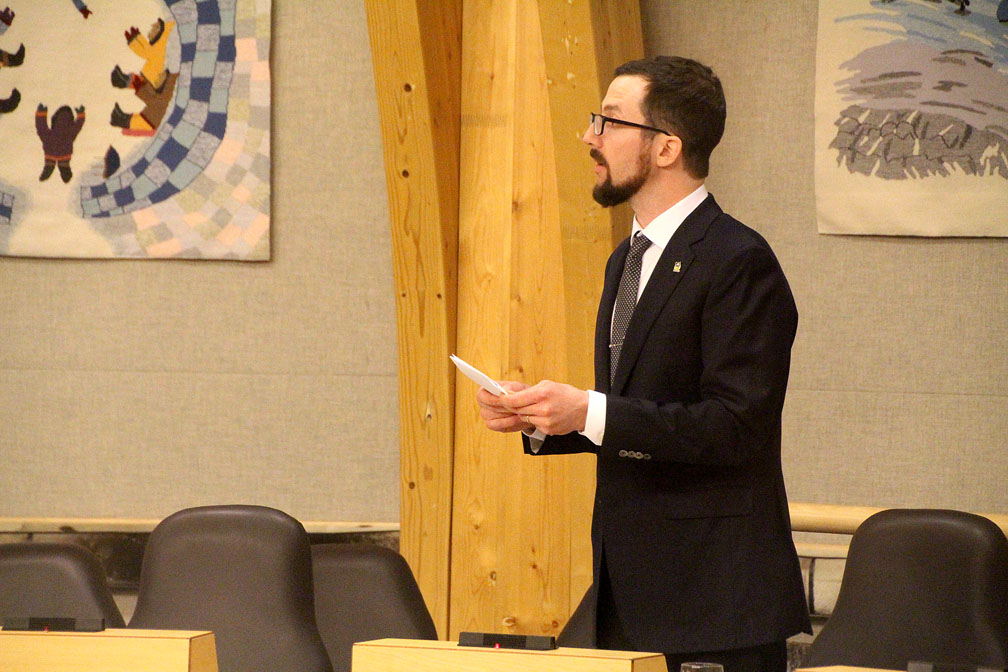 The territorial government also needs to spread more of its infrastructure projects throughout Nunavut’s smaller communities, rather than concentrating them in regional hubs, he said.

And Main said the territory needs to seriously consider partnering with the private sector in order to build much-needed infrastructure, such as fibre optic internet connections, ports, roads and hydro-electric projects.

Main made these comments during the recent sitting of the legislature, on Nov. 8, shortly after MLAs debated the capital budget for 2018–19.

That debate saw some regular MLAs try to strike the construction of Iqaluit’s new jail from the upcoming capital budget, to protest against an expected reduction in the number of Inuit workers involved in the project, as a result of the territorial government trying to curb costs.

The initial goal was to have 20 per cent Inuit employment during the jail’s construction. However, Justice Minister Jeannie Ehaloak said that she expected the contractor, Pilitak Enterprises Ltd., would lower that to 15 per cent, in response to the government’s request that the company lower its bid.

But Main said he would be “ashamed” to see a project built in his home community with so few Inuit workers.

“We have a huge amount of unemployed people in our communities across Nunavut,” Main said.

“Unemployment is one of the things that are killing Nunavummiut, poverty and unemployment. That’s the first area I think we need to seriously re-evaluate.”

Main also called for “all communities” to be considered as possible locations for new territorial infrastructure, rather than just Nunavut’s regional hubs.

“Just yesterday in the house, one of my colleagues raised the idea of placing infrastructure, territorial or regional infrastructure, in a non-regional centre community and he was laughed at,” Main said.

Nunavut’s government is unable to afford much badly needed infrastructure. So it’s time for the government to look more seriously at partnering with the private sector, Main said.

“I believe that we have opportunities to tap into the private capital markets, whether it be for housing, partnering with mining companies, for example, whether we’re partnering with private investors to bring up hydro power into Nunavut and/or telecommunications, including fibre optics, or to build roads and ports,” he said.

A P3 is a public-private partnership. Iqaluit’s recently built airport was built through such an arrangement.

“We have one of Nunavut’s largest-ever infrastructure projects just down the road here which is a P3 project,” said Main.

“Was that P3 a success? Was it a failure? We should try to understand it so that going forward we have some clarity for the private sector in terms of where they can invest and what our expectations are as a government.”