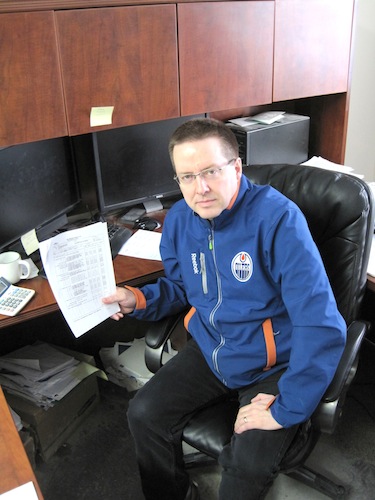 Cambridge Bay businessman Bruce Peterson holds a list of the many perishable items he ordered in for his new restaurant. (PHOTO BY JANE GEORGE) 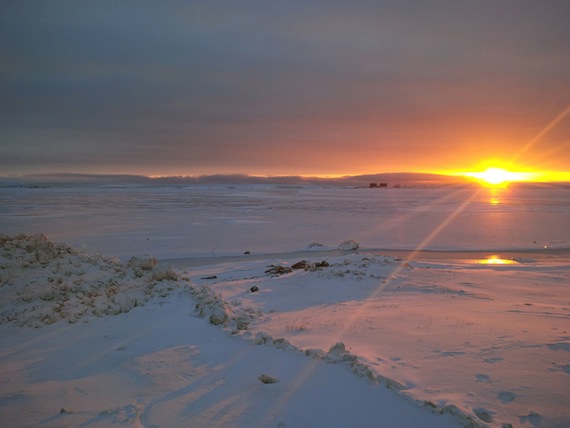 The waters outside Cambridge Bay are covered with thick ice — so thick that the Canadian Coast Guard Louis St-Laurent could not bring in the last NTCL barge as expected. (PHOTO BY JANE GEORGE)

CAMBRIDGE BAY — A terse Oct. 19 email from the Northern Transportation Company Ltd. told its clients in Cambridge Bay what many already suspected: the Nunakput barge, which they’d been waiting for since September, will not deliver its cargo, despite a call for icebreaker assistance.

“NTCL regrets to inform you that entry to Cambridge Bay for delivery of the fourth and last barge of the 2014 season is not possible,” said the company in an email shared with Nunatsiaq News.

“Canada Coast Guard Services is unable to provide safe passage of our vessel into the community due to the significant presence of ice.

“The freight will be stored in a safe secured location in Roberts Bay until such a time that a safe transfer by cat train can be performed. We will be in contact with each of you in the coming week to provide further details.”

The barge was originally due to arrive in the western Nunavut community at the end of September. Its arrival was pushed to early October and then later, to Oct. 14, Oct. 16 and finally to Oct. 18, after the arrival of the CCGS Louis St-Laurent.

“What a bummer.” That was the reaction of Wilf Wilcox, owner of Jago Services Inc., an electrical, heating and plumbing business, when he received the email from NTCL.

Wilcox, who was until recently a board member of Norterra, which owns NTCL, was expecting everything from toilets to gycol for his business as well as personal items on the barge.

Wilcox said he doesn’t have a lot of stock left, although he was fortunate that an earlier barge brought the materials he needed for work associated with the Canadian High Arctic Research Station now under construction in Cambridge Bay.

Others are less fortunate, including, for example, a couple waiting for furniture and beer, and the Ikaluktiutiak Elks, which was expecting soda pop and other beverages for its social club.

And, as he sat in his office Oct. 20, Bruce Peterson, owner of the general contracting company, Inukshuk Enterprises, rattled off a list of items stuck on the missing barge — from 24 cases of ketchup to 200 cases of apple juice — for the new restaurant opened to serve clients at Inukshuk’s Green Row hotel.

“It’s affecting us in many ways from the restaurant to the shop to construction to the hotel,” Bruce said.

The delayed cargo — even though it was insured — means he’ll be obliged to bring it in by or buy it locally for up to six times the cost.

“If you’re going to accept cargo, then it means you agree to deliver it,” he said.

Fellow Cambridge Bay businessman Peter Laube of Kalvik Enterprises, a construction company, who’s been angry with the delays for weeks, said he will fly up construction materials and needed personal supplies up to Cambridge Bay. He also plans seek reimbursement from NTCL for added expenses.

Clients also wonder how the materials they ordered will make it to Cambridge Bay by cat train, which likely won’t depart until March. They also want to know how perishables will be stored at Roberts Bay in -40 C temperatures.