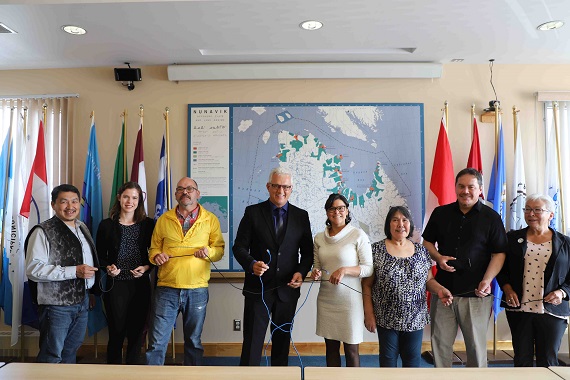 Stéphane Lauzon (fourth from left), Canada’s parliamentary secretary for sport and persons with disabilities, is pictured next to KRG chair Jennifer Munick and other leaders of Nunavik organizations in Kuujjuaq on Aug. 22, when the federal government made good on its investment in the region’s high-speed internet project. (PHOTO COURTESY OF KRG)

Ottawa and Quebec City have finally made good on a pledge to help fund Nunavik’s plans to roll out high-speed internet across the region.

The Kativik Regional Government’s project will use a combination of technologies, including fibre optic cables, microwave towers and surplus satellite capacity, to boost the region’s bandwidth by 2021.

But the first phase of the Tamaani Internet project has been waiting on $125 million in federal and provincial funding to get started—money that was announced in 2017.

Both governments came through with that funding on Aug. 22. Ottawa is making a $62.5-million investment in the project through its Connect to Innovate program, while the other $62.5 million comes via Quebec’s Société du Plan Nord.

The KRG will kick in an additional $500,000 to begin work on the upgrade, which aims to lay undersea cables along its Hudson Bay coast by the end of 2019.

Work to prepare for a undersea survey off that coast was set to begin this summer.

“This KRG Tamaani project will lead to faster and better internet services for residential, business and government users,” said KRG chair Jennifer Munick in a news release on Wednesday, Aug. 22.

“It will reduce our reliance on expensive satellite broadband and shrink the digital divide between north and south even more.”

The KRG’s initial goal was to have a fibre optic network in place throughout the region by 2021.

But following a 2016 feasibility study, the regional government has opted to gradually roll out a combination of fibre optic links, microwave towers and surplus satellite capacity.

Under the plan, Tamaani will lay undersea fibre optic cable from Chisasibi north to Kuujjuaraapik, Umiujaq, Inukjuak and Puvirnituq in 2019.

Tamaani will then use surplus satellite capacity in the remainder of Nunavik’s communities.