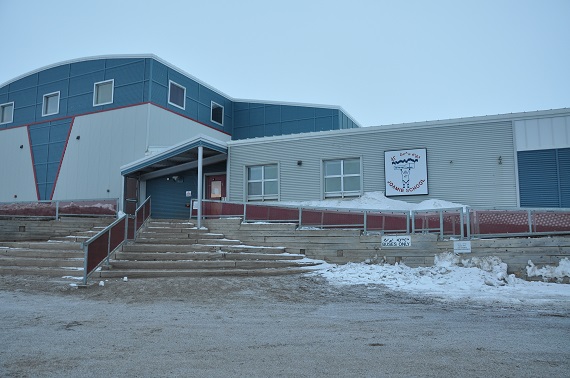 Joamie school is one of four elementary schools in Iqaluit that could see full-day kindergarten implemented in the next few years, as a way to help alleviate the shortage of childcare options for families. (PHOTO BY SARAH ROGERS)

Government of Nunavut education officials are looking at launching full-day kindergarten across the territory to help boost children’s programming and address an acute shortage of childcare options for families.

The Department of Education has been considering moving kindergarten in the territory’s schools from a half-day to a full-day program, though the plan is not yet official.

“We are in the initial stages of determining what resources would be required and how the program would roll out before moving any further,” said the department’s deputy minister, Pujjuut Kusugak.

But even if approved, not all Nunavut schools would be prepared to offer the program right away, Kusugak added, due to teacher allocations and other facility requirements.

Full-day kindergarten classrooms would be required to have their own bathrooms, for example—already a challenge in overcrowded schools like Nakasuk and Joamie schools in Iqaluit.

“I’m quite happy to hear they’re considering full-day kindergarten, and I think people are generally in support of it,” said Doug Workman, who chairs the Iqaluit District Education Authority.

“But in Iqaluit, we have two schools that are bursting at the seams. We’re going to need more space and that’s going to be one of the big challenges.”

Workman estimates there are about 120 kindergarten students between the two schools—and that’s not including kindergarten classes at Iqaluit’s two other smaller elementary schools, Nanook and Trois-Soleils.

There are other academic benefits to doubling class time for kindergarten students, said Workman, a former teacher.

As the territorial government moves to create a fully bilingual English–Inuktut school system from kindergarten to Grade 12, Workman sees full-day kindergarten as a good opportunity to give Nunavut’s children a strong and early foundation in Inuktut.

“If the government is really going to put its money where its mouth is, they’re going to have to do something to support it,” he said.

The GN said it’s still too early to estimate the cost of rolling out the program or a timeline for when it could be implemented.

Across the country, six provinces and the Northwest Territories currently offer full-day kindergarten.

After Ontario implemented its full-day program in 2010—the only one in Canada where students begin at age four—research done by the Ontario Institute for Studies in Education found positive benefits.

Children in full-day kindergarten were already scoring higher on reading, writing and mathematics than those in half-day programs and remained ahead until Grade 3.

The research also noted the benefit to Ontario families, who no longer required daycare for their kindergarten-age children.

In Iqaluit alone, an informal survey on childcare needs conducted this past January found there were 800 names on wait lists for daycare in Nunavut’s capital.

To arrive at that number, the Department of Education approached the 18 licensed facilities in the city to indicate how many names they had on their waitlists, so it’s likely the same names appear on multiple lists.

The department also acknowledged that some families use unlicensed childcare services.

But the survey still points to an urgent need for care, especially for preschool-age children, who made up almost half (345) of Iqaluit’s childcare waitlist.

Elsewhere in Nunavut, there were 154 names on childcare waitlists, the department said.