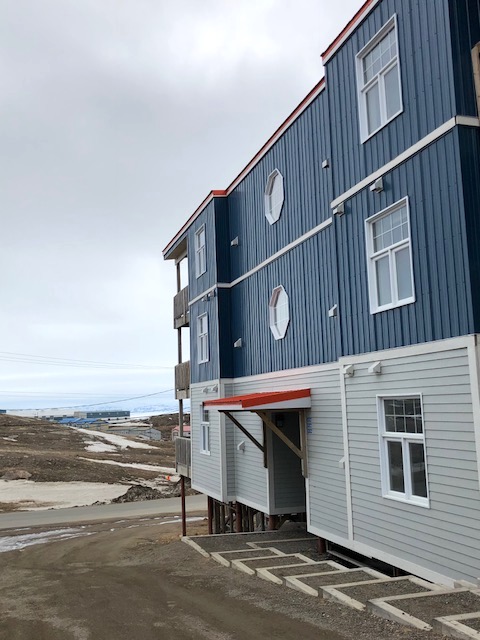 Part of the solution to Nunavut’s housing crisis: affordable condos like these ones in the Road-to-Nowhere neighbourhood of Iqaluit which are sold to Government of Nunavut employees. (PHOTO BY JANE GEORGE) 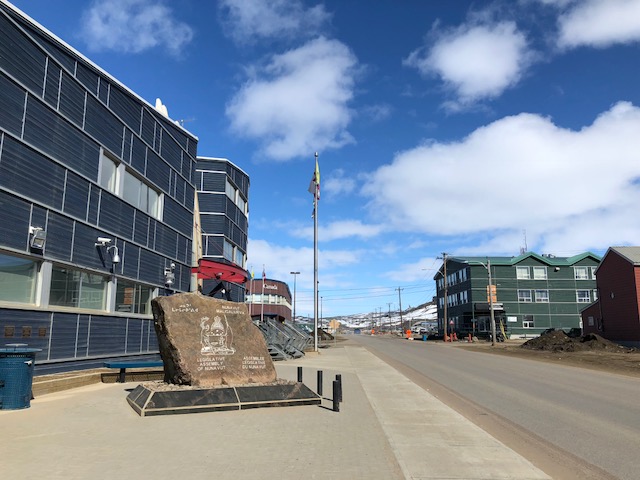 Under sunny skies on June 8 in Iqaluit, MLAs discussed the budget of the Nunavut Housing Corp. inside the assembly chamber of the territorial legislature. (PHOTO BY JANE GEORGE)

One of Nunavut’s biggest problems—the chronic lack of affordable housing in the territory—received hours of discussion last Friday at the Nunavut legislature, where MLAs reviewed the budget of the Nunavut Housing Corp. in committee of the whole.

That’s despite the urging of Baker Lake MLA Simeon Mikkungwak, who chairs the committee of the whole, to speed up their work.

MLAs still have many 2018-19 budget requests remaining from the Government of Nunavut’s 10 departments and five Crown corporations to look at, line-by-line, a task they must finish by the end of the spring sitting this Friday.

With a stock of about 5,000 public housing units and another 1,400-plus staff units across Nunavut, the housing corporation is by far the biggest landlord in the territory.

It’s also one of the largest departments within the Government of Nunavut, accounting for about 14 per cent of the territorial government’s budget, roughly $201 million in 2018-19, just a little less than the Education Department’s $213 million.

While the housing corporation budget may seem big, the territory’s housing needs remain big, too, with several MLAs bringing up the dire lack of housing in their communities, which can lead to up to 23 or more people at a time sharing a three-bedroom house.

“There’s overcrowding and homeless people everywhere in Nunavut who are living in shacks,” Kusugak said.

An estimated 3,000 more housing units are needed to deal with what Audla called a “huge housing deficit.”

But building more public housing creates issues of its own for the corporation: every time Nunavut gets more units, these cost the GN more to maintain, Audla said.

The average annual maintenance cost for a public housing unit is now about $27,000 per year.

Kusugak and Audla referred to a new deal between the GN and Ottawa on housing as well as possible partnerships with Inuit-owned organizations that are expected to bring more housing construction, but building more housing will push the corporation’s annual budget even higher.

For example, the 91 new housing units coming in 2018-19 mean the housing corporation needs $2.15 million more to cover the increased cost of maintenance and administration, utilities, property taxes, and leases for those 91 units.

Discussion at the committee of the whole focused on how those costs could be reduced.

“I think the key is education and awareness,” Kusugak told the MLAs.

“The biggest energy saver is the person who is in the house. I think it’s very important for the housing corporation to put out a campaign to shut windows, turn down the thermostats, turn lights off, don’t leave lights unattended, and things like that. And, don’t plug in your vehicle if it doesn’t need to be plugged in.”

Some tenants don’t want to fix a doorknob or they leave their windows open in winter, so this creates more operations and maintenance expenses.

To improve this situation, the housing corporation plans to start a tenant awareness program, similar to the Pivallianiq program run by the Kativik Municipal Housing Bureau in Nunavik, aimed at better home and equipment maintenance, along with less vandalism and more tenant pride.

But high operations and maintenance costs are not the only financial challenges the housing corporation faces in the territory. While about nine in 10 tenants pay their rent, non-paying tenants owe more than $30 million in accumulated rent arrears.

The MLAs also looked at the corporation’s success in carrying out the “Blueprint for Action on Housing—Implementation Plan for the Government of Nunavut Long-Term Comprehensive Housing and Homelessness Strategy,” tabled in 2016 in the Nunavut legislature.

This document contained 60 specific action items for the housing corporation to deal with in a two-year period.

However, the housing corporation’s proposed 2018-2021 business plan said some actions planned for the 2017-18 fiscal year under the Blueprint for Action on Housing were not completed as a consequence of “capacity constraints,” said Arviat North-Whale Cove MLA John Main, of the standing committee on community and economic development, in his report to the committee of the whole.

“The standing committee recognizes that it is not practical to address all of the blueprint’s action items at the same time and encourages the NHC to prioritize and focus its work,” Main said.

But Kusugak said the corporation plans “to update staff housing and homeownership programs, which will improve how we respond to housing needs across the territory.”

Still, home ownership remains a tough sell. Public housing tenants can ask to buy their unit, but so far no one has, possibly because of high operating and maintenance costs.

MLAs also cited other economic constraints on accessing housing: for example, if you earn $177,000 in Iqaluit, you won’t qualify for social housing but you’ll earn too much to access home ownership programs.

About 55 GN workers in Iqaluit have bought into a staff condominium program where a $269,000 three-bedroom condo costs about $2,115 a month in mortgage and condo fees.

For now, the 600 or so GN workers living in staff housing in Iqaluit don’t have to worry about being forced into home ownership.

“We’re revising that position at this point,” Kusugak said. “It’s not an option right now in Iqaluit.”

You can follow the action this week in the legislature, during the final week of its spring sitting, starting at 10 a.m., online.