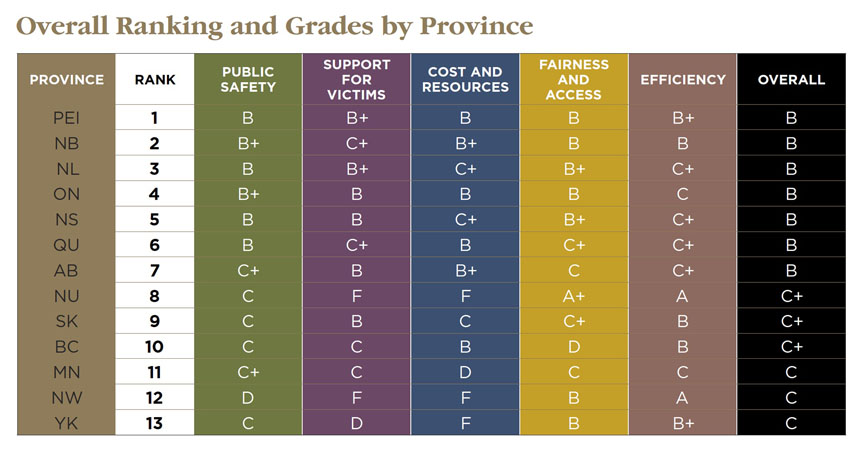 In its second report card on Canada’s 13 territorial and provincial justice systems, the Macdonald-Laurier Institute kept Nunavut’s overall grade at C+ and raised its ranking from tenth to eighth place. (IMAGE FROM MLI REPORT CARD)

Nunavut’s justice system showed some improvement over 2016 but per capita costs of achieving public safety are rising rapidly, the Macdonald-Laurier Institute said in a report card released this week that measures the performance of justice systems in all 13 territories and provinces.

The think-tank’s first report card, released in September 2016 and done by law professor Benjamin Perrin and statistics expert Richard Audas, gave Nunavut a C+ grade and ranked the territory in tenth place among the 13 jurisdictions.

This year, Perrin and Audas gave Nunavut another C+ grade, but raised its ranking to eighth place.

“The territory’s federal statute violations declined substantially. It also saw a reduction in cases of failure to appear and unlawfully at large, along with improved support for victims and an improvement in fairness and access to justice,” the report’s authors said.

And they give Nunavut a higher grade than either the Northwest Territories or Yukon, which received grades of C and rock-bottom rankings of 12 and 13 respectively.

But those rates peaked in 2012 and have been in decline, the author’s said.

At the same time, there is a high clearance rate for crime in Nunavut, and the territory received an A+ mark in that category.

“Despite its very high crime rates, Nunavut has the highest weighted violent and non-violent crime clearance rate in the country (though both of these rates have been declining since 2012)” the report said.

Nunavut also received an A+ for access to justice, and high praise for its legal aid system.

“Nunavut scored very highly for fairness and access to justice since it has the highest criminal legal aid expenditures per 1,000 crimes of any jurisdiction in Canada, and this rate has been steadily increasing over the last five years,” the report authors said.

At the same time the cost of running Nunavut’s criminal justice system is enormous and increasing “significantly.”

“The cost of public safety per person in Nunavut, the cost of corrections per capita, and the average daily inmate cost vastly exceed those of every other jurisdiction in Canada,” the report said.

Nunavut is also the most highly policed place in Canada, with more police officers per capita than any other jurisdiction, although the report’s authors admit that’s due, no doubt, to the territory’s sparse population and high crime rates.

The territory also got an failing F grade for victims services, based on low numbers of referrals, though there is some improvement in the proportion of offenders ordered to make restitution to victims.

Nunavut courts, however, are highly efficient, and get a high mark for having one of the shortest median criminal case lengths of any jurisdiction in Canada, the report found.