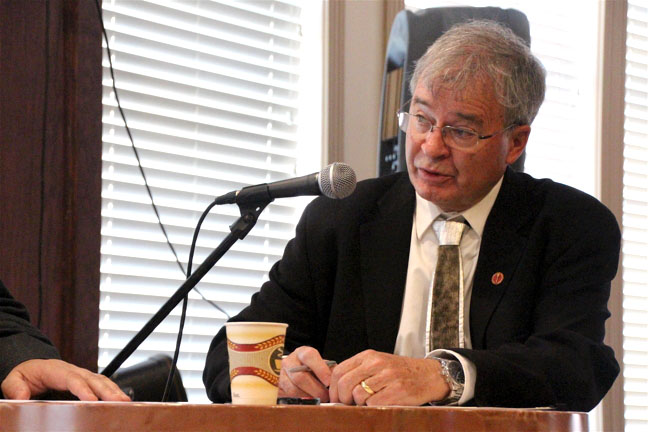 Nunavut Senator Dennis Patterson says Nunavut doesn’t have enough information yet to enforce a carbon tax by the 2018 deadline, an impossible deadline, he added, given the territory’s fall election. (PHOTO BY BETH BROWN)

Nunavut doesn’t have time to develop a “carbon pricing regime” by 2018 when the fuel emission tax comes into force in Canada.

Carbon pricing, as it is currently planned, would place a surcharge of $10 per tonne on carbon-based fuels, mostly diesel, sold in Canada, starting in 2018. This surcharge would increase to $50 per tonne by 2022.

“It’s a mechanism meant to alter behaviour of consumers by making it cheaper to use alternative sources of energy rather than dirty and polluting fossil fuels,” said Patterson.

With a territorial election set for Oct. 30, pushing new legislation will be impossible, especially since a federal study on impacts of carbon pricing in northern territories won’t be finished until the fall, Patterson said.

“We can’t rush this process,” he said, adding that for at least this year, “we should be granted an exemption.”

Patterson talked about how Nunavut runs on diesel and that renewable energy options are too expensive to install quickly.

But in the Northwest Territories, 76 percent of electricity already comes from hydroelectric power, Patterson said. In Yukon, it’s 95 per cent.

Last December, Nunavut signed on to a national agreement on climate change that aims to have the country powered by 90-per-cent clean energy by 2030. That’s 13 years from now.

Nunavut signed the Pan-Canadian Framework for Clean Growth and Climate Change on condition that carbon pricing in the territory be implemented in a fair and proportional way.

Patterson said even when carbon pricing is enforced it’s going to be at great cost to the Nunavut government, which already relies on federal transfers for the majority of its budget.

This is because the Government of Nunavut is a large consumer of fuel for buildings such as government housing, schools and health centres, he said.

“The GN is the buyer and lender of fuel in Nunavut,” he said. “The GN would be agreeing to tax itself.”

Carbon pricing could also become a huge cost burden for businesses in Iqaluit and throughout Nunavut, said Matthew Clark, president of the Iqaluit Chamber of Commerce.

He said increased costs could directly impact consumers in the territory who are already faced with high costs for goods and services.

“Environment is critical, but we have to be informed before decisions are made,” Clark said. “I don’t think businesses have been provided with enough information to consider it.”

Patterson said he hopes that northern regions with high rates of poverty which are already feeling the brunt of climate change will not pay more for reliable power, or see the cost of northern living increase.

He also quoted Ammar Al-Joundi, president of Agnico Eagle Mines Ltd, as saying that should carbon pricing be imposed, the company, which has three mine sites in the Kivalliq region, will lose about $20 million a year by 2023 due to carbon emissions in Nunavut.

The breakfast marked the third in a speaker series organized by the Iqaluit Chamber of Commerce. It will be the last monthly event until the fall.