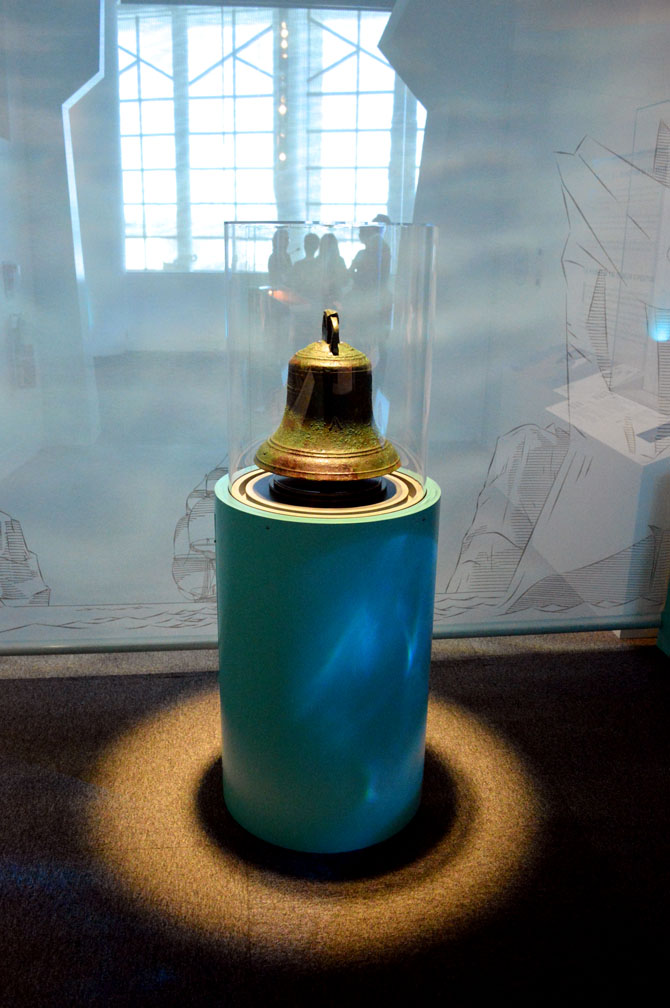 The ship’s bell from the HMS Erebus. (PHOTO BY STEVE DUCHARME) 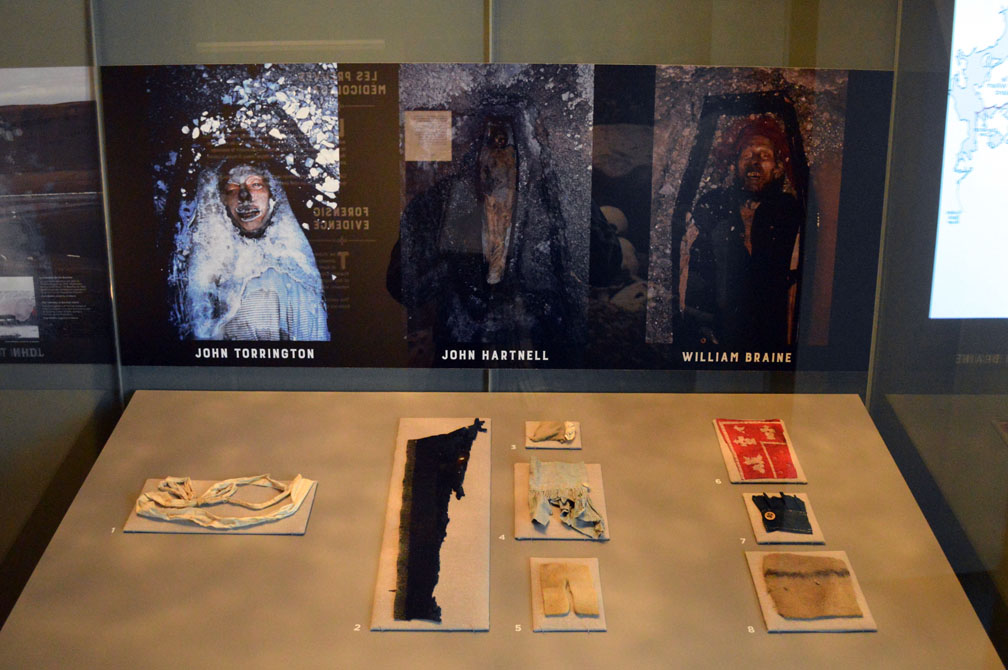 Fragments of clothing recovered from the Beechey Island graves of John Hartnell, John Torrington and William Braine, who died of disease during the first year of the Franklin expedition, during the winter of 1845-46. (PHOTO BY STEVE DUCHARME) 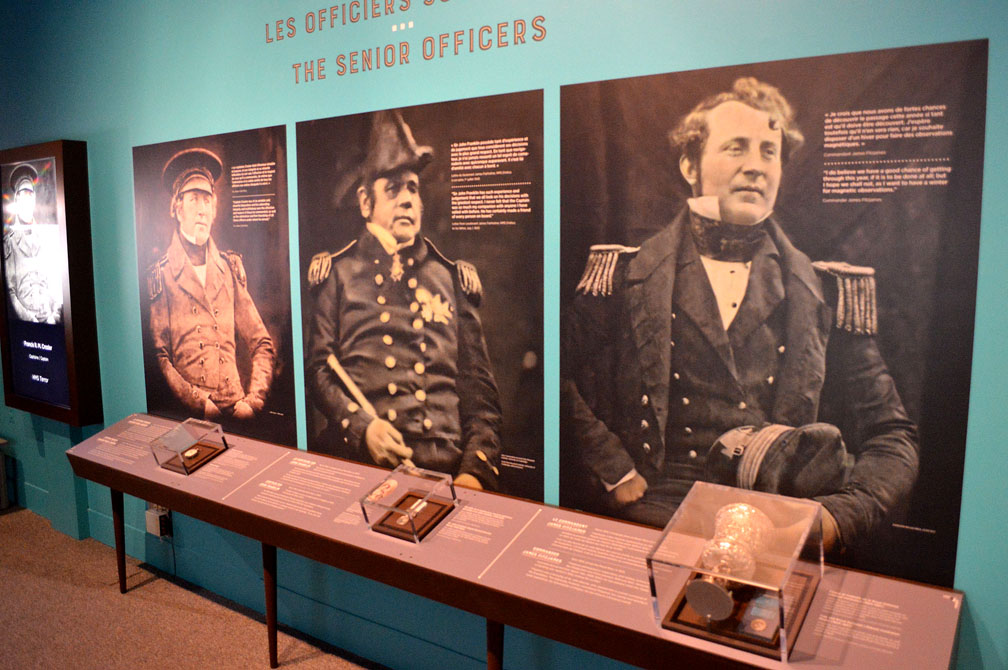 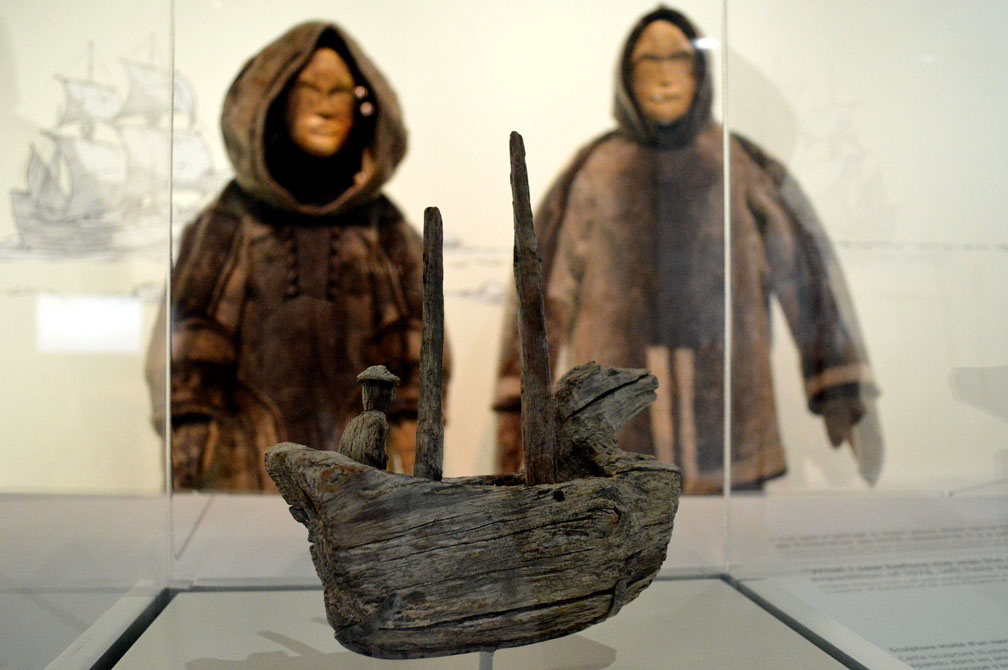 Mannequins in Inuit-style sealskin parkas look over an Inuit wood carving depicting a European-style ship from about the 1500s. (PHOTO BY STEVE DUCHARME)

OTTAWA—Sealed under inch-thick glass at the Canadian Museum of History in Gatineau, Que. rests a tattered, moldy scrap of paper that for the past 170 years has served as a final message from the doomed Arctic expedition led by Sir John Franklin.

It’s scrawled, by one of his remaining crew members in 1848, in the margins of a standard piece of British Navy letterhead.

“Sir John Franklin died on the 11th of June 1847 and the total loss by deaths in the Expedition has been to this date 9 officers and 15 men.”

The messy handwriting, faded by time, signals that the desperate crew was abandoning its ships, HMS Erebus and HMS Terror, after being locked in ice for nearly two years in Victoria Strait.

The “Victory Point Note,” a reference to where it was found on King William Island in 1859, is one of many artifacts on display for the first time in Canada in the new exhibit, Death In the Ice: The Mystery of the Franklin Expedition.

The exhibit opened to the public yesterday, March 2, following a celebrated eight-month stint at Britain’s National Maritime Museum in the southeast London borough of Greenwich, which co-developed the collection.

Loaded with new items from the discovery of the two Franklin ships in 2014 and 2016, the exhibit challenges history sleuths to revisit the mysterious final days of the expedition’s crew, piecing together the puzzle with new artifacts found by by Parks Canada archeologists after they found HMS Erebus in 2014 and HMS Terror in 2016.

“Exploration is what brings us here today,” said the parliamentary secretary to the minister of environment and climate change, John Wilkinson, speaking at a media preview of the exhibit held March 1.

Exploration, as any visitor to the exhibition will understand, was what drove adventurers to keep looking for Franklin, after they found the expedition’s first winter camp on Beechey Island in the High Arctic.

At that site were three marked graves of crew members who were early victims of disease, a mountain of garbage, and two foreboding signposts planted in the tundra directing crew members toward long-departed ships.

One of those signs has traveled to Gatineau, showing a gnarled white hand painted on the side of a wooden plank and nailed to the top of a spare boarding pike.

Exploration also led modern researchers to another piece of the puzzle, after a helicopter crew spotted a “davit”—part of a ship’s crane—washed up on a small island beach in Nunavut’s Queen Maud Gulf.

That davit, now encased behind glass at the exhibit, belonged to HMS Erebus, and led researchers to the ship’s shallow grave in the nearby waters—confirming long-ignored Inuit testimony that pointed to the location to the ship at a place know by Inuit as “Utjulik.”

Two years later, HMS Terror was found through a similar happenstance, after Sammy Kogvik, a Canadian Ranger from Gjoa Haven, told the crew of the Arctic Research Foundation vessel, Martin Bergmann, that he had once seen a ship mast sticking above the sea ice in Terror Bay.

The former Nunavut premier, Eva Aariak, speaking as president of Inuit Heritage Trust and attending at the exhibit’s opening, said that what we know of Franklin and his crew “demonstrates the strength of Inuit traditional knowledge in our homeland.”

Death in the Ice is a “celebration of Inuit traditional knowledge that has led to the discovery of both ships,” she said.

Inuit historians, like Order of Canada officer Louie Kamookak, were crucial in collecting and compiling ancestral knowledge on the whereabouts of the ships, Aariak explained.

But “it is the hope and dream to be able to showcase these artifacts in our own homeland,” Aariak said, once Nunavut builds a modern facility capable of housing them.

Death in the Ice will be showing at the Canadian Museum of History until Sept. 30. 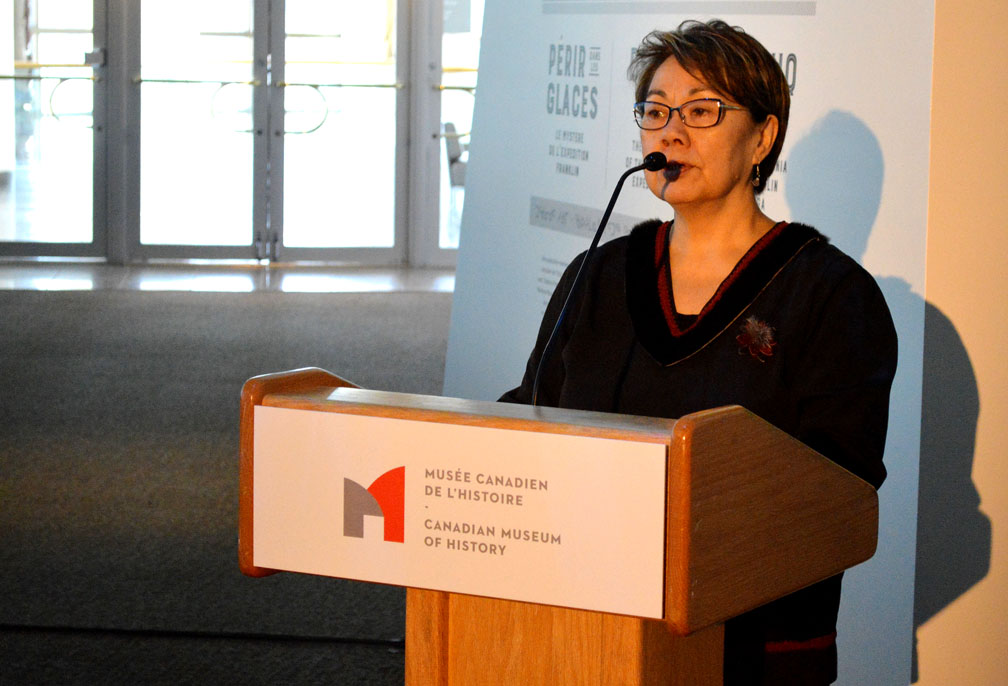 Eva Aariak, president of Inuit Heritage Trust at the opening of Death In the Ice: The Mystery of the Franklin Expedition at the Canadian Museum of History in Ottawa. She said that what we know of Franklin and his crew “demonstrates the strength of Inuit traditional knowledge in our homeland.” (PHOTO BY STEVE DUCHARME)