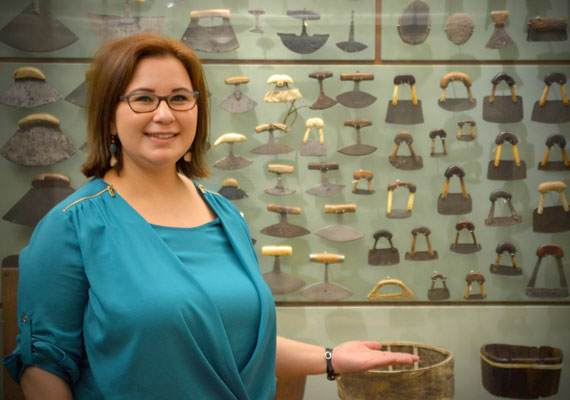 The Kitikmeot Heritage Society’s Pamela Gross with artifacts from the Fifth Thule Expedition at the National Museum of Denmark. (PHOTO BY BRENDAN GRIEBEL) 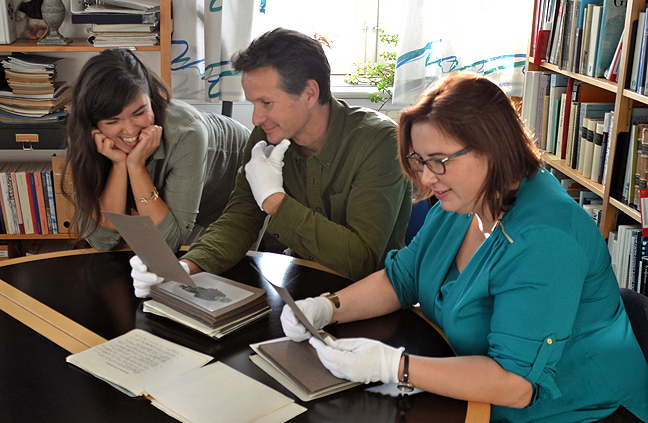 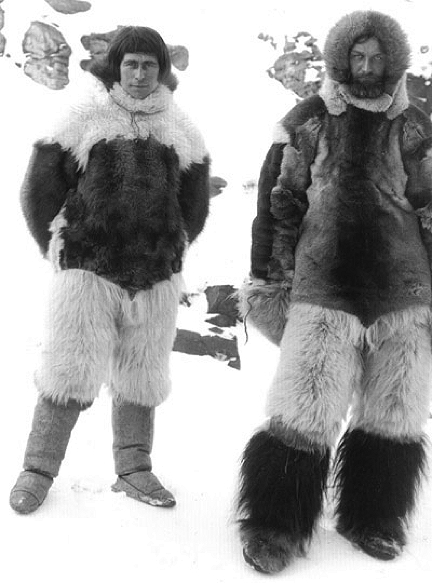 The famed 20th century explorer Knud Rasmussen will soon undertake a new journey across the remote communities of Canada’s Arctic — but this time it’ll be digital.

Eighty-two years after Rasmussen’s death, documents and artifacts from his historic Fifth Thule Expedition will be digitized and distributed across Canada’s North by way of a comprehensive “cyber-atlas.”

The Inuit-Danish explorer Knud Rasmussen became the first European to cross the Arctic from eastern Canada to Alaska on his Fifth Thule Expedition from 1921 to 1924, when he collected enough information about Inuit life to fill a 10-volume journal.

That expedition is widely regarded as one of the most extensive undertakings of its kind.

Many of the artifacts to be included in the atlas — Rasmussen collected approximately 6,000 — will appear for the first time outside Denmark.

For Nunavut, the project marks a giant leap forward in the electronic distribution of history.

The non-profit Kitikmeot Heritage Society, based in Cambridge Bay, is spearheading the project, with technological assistance provided by Carleton University in Ottawa.

The atlas will be a priceless resource to explore Inuit culture before mass settlement in the 1940’s ended traditional, semi-nomadic lifestyles.

“[Rasmussen] worked with these people, captured their stories, their songs, their technologies and documented it.”

Using sophisticated software, thousands of names, artifacts and locations will be “tagged” and entered into the database.

The tags will then make it possible for users to trace an item, place or individual’s history across all available documentation and catalogues entered into the atlas.

“It works by this big relational web. If you go to a place, you’ll see the people and everything related to that place… you can navigate this web through your own interests,” explained Greibel.

“You might be reading about an artifact, you’ll be able to see that artifact, look at it three-dimensionally, venture into the person who made it, the stories that person told, or the songs they sang, or the maps they drew and navigate through it as you see fit.”

Even in its early stages, the atlas is proving its worth to some Kitikmeot Heritage Society researchers who are compiling the data.

Community director Pamela Gross used the database to find her grandmother’s great-grandmother, who is mentioned in Rasmussen’s journals.

And another employee believes they’ve found their namesake, although admittedly more research will be needed for confirmation.

“I think it’s going to serve as a linkage,” Gross said of the project’s potential impact on Nunavut.

“You can see the people, see where they are on the map. We will be able to learn more about specific areas.”

Local histories and knowledge from elders will be added to the atlas later, following a future community tour by the society.

Even now, she said, some elders who witnessed Rasmussen’s historic journey when they were children are still alive.

Early funding for the project has been provide by CIRA, or Canadian Internet Registration Authority, with technical support from Carleton University’s Geomatics and Cartographic Research Centre in Ottawa.

“We’re in fact a pilot project, in terms of making this stuff more widely available to everyone,” said Carleton University professor Fraser Taylor.

Taylor and Carleton staff recently returned from Denmark, along with researchers from the historical society.

Much of the visit was spent going over logistics with Danish museums on how to distribute the digital artifacts in Canada.

In many ways, the electronic infrastructure that will be installed to distribute the atlas will be unprecedented in the territory.

“That’s the next step, to maximize the access speed to communities to make it more accessible,” said Greibel.

Open source Nunalit server software, used in other online northern projects, was used during the early stages of the project.

But the size of the Rasmussen atlas will be charting unknown waters, said Greibel, and the infrastructure will have to be expanded to make the database fully available to Nunavummiut living in communities with limited internet bandwidth.

“The idea is we’re looking at putting servers in most of the communities… so that the information is right in the communities and you can access it quickly.”

Ideally, Greibel envisions communities storing and collecting their own data, rather than having that traditional knowledge stored on southern servers.

If all goes according to plan, the Kitikmeot Heritage Society believes the Rasmussen atlas will represent a new era in Danish and Inuit collaboration — a celebration of shared Arctic roots.

“This has gathered a ton of momentum. When we were over in Denmark, the Canadian ambassador threw a gala for us. It’s being picked up as a diplomatic bridge between Canada and Denmark, and the European Union and North America,” he said.

Look for the initial distribution of the Knud Rasmussen atlas early in 2016.

The Inuit-Danish explorer Knud Rasmussen became the first European to cross the Arctic from eastern Canada to Alaska, on his Fifth Thule Expedition from 1921 to 1924, when he collected numerous traditional stories and information about Inuit culture.