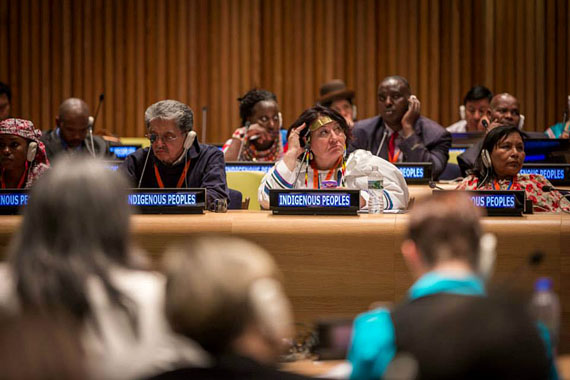 Puju Christian Olsen of Greenland and Cathy Towtongie of Canada in a meeting room at the United Nations headquarters building in Manhattan Sept. 22, during the World Conference on Indigenous Peoples, which wrapped up Sept. 23. More than 1,000 indigenous leaders from around the world, including a delegation from the Inuit Circumpolar Council, sat down with governments to discuss the implementation of the UN Declaration on the Rights of Indigenous Peoples. In the conference’s outcome document, governments agreed to continue implementing UNDRIP, but the government of Canada raised objections to paragraphs in the document that assert the principle that indigenous peoples must give free prior and informed consent to activities on their lands, raising the ire of the Assembly of First Nations. The AFN issued a statement Sept. 23 saying that Canada’s position is “an affront to the concept of reconciliation.” (PHOTO BY SHANE BROWN, GCG MEDIA TEAM)