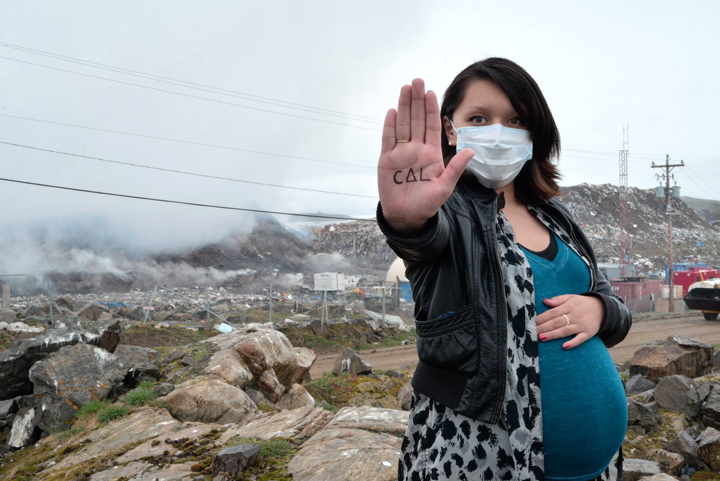 Iqaluit’s Julie Alivaktuk is expecting her first child in 10 days. She’s frustrated with how smoke from the dump is impacting her health and worries about how it will affect her baby. The word on her hand reads, “taima,” or “enough,” in English. (PHOTO COURTESY JULIE ALIVAKTUK)

As the Iqaluit dump fire continues to belch out smoke and dust, one pregnant mother says she’s had enough.

Julie Alivaktuk, who is expecting her first born within the next 10 days, is worried about the damaging effects that the chemical-filled dump fire smoke might have on her newborn.

“I don’t want my baby to breathe that for its first breath of life,” Alivaktuk said.

Alivaktuk and her boyfriend, Shawn Inuksuk, decided to take action.

On July 3, Alivaktuk donned a surgical mask and posed in front of the smouldering dump’s ground zero area with a message on her hand written in syllabics.

“The right to clean air is the most basic of human rights,” Inuksuk wrote in the comments section of his photo.

The message is simple, Alivaktuk said: the city needs to put the fire out.

“We feel strongly about it. We want people to know what’s going on. And I think other people feel the same way. So we feel we’ve given a voice to other people.”

Since the dump fire started smoking May 20, Alivaktuk said she’s been less active around the community.

Exercise is important for expecting mothers. In a Nunavut Healthy Living guideline, it says keeping active while pregnant can help mothers relax and sleep better.

Activity also helps build stamina for labour and delivery, as well as recovery after labour.

“I want to be out with my kid when he’s here. So it really worries me that I have to stay in all the time. And kids like to play outside too, and it’s not good for them to stay inside the house all the time,” Alivaktuk said.

What’s more worrisome for her is how smoke from the fire might affect the baby right now.

“I feel that my baby will have lung problems, or who knows what kind of problems that it will bring to this baby?” Alivaktuk said.

“To breathe in this kind of air, it’s like they’re smoking themselves — like smoking a cigarette, basically.”

In a July 4 public service announcement, the Government of Nunavut gave an update on the city’s air quality.

“To date, 24-hour average air pollution concentrations have been low, and are below established health standards,” the PSA read. “There are occasional spikes in pollutant levels that are relatively short.”

That information is based on air monitoring stations located at the Four Corners and the armed forces base.

However, the smoke still may have an impact on people with heart or lung disease, as well as the elderly, young people, and pregnant woman, the PSA said.

It warned that “vulnerable” people should stay indoors when the smoke blows into town.

“People should seek medical attention if they have symptoms such as trouble breathing or tightness in the chest,” the PSA said.

Not all the data is in, however, and more results from another five testing areas in Iqaluit are still to come.

“Further updates will be provided as new information comes in. Testing will continue until the dump fire is extinguished,” said the government notice.

Although it’s unknown exactly what chemicals are in the dump fire smoke, a landfill fire expert Dr. Tony Sperling said he reckons there are “nasties” contained therein.

Others say the smoke could contain cancerous chemicals such as furans and dioxins.