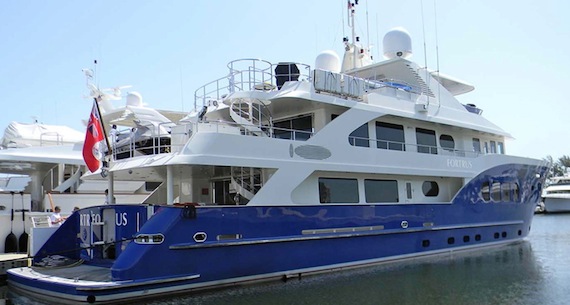 The Fortrus, a luxury yacht from Australia, docked in Cambridge Bay in early September. (PHOTO FROM FORTRUS.COM) 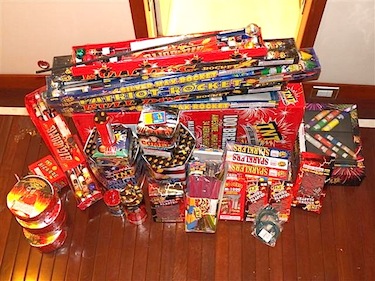 Police seized this stash of fireworks, which are of a grade not allowed in Canada, off an Australian yacht in Cambridge Bay. (PHOTO COURTESY OF THE RCMP) 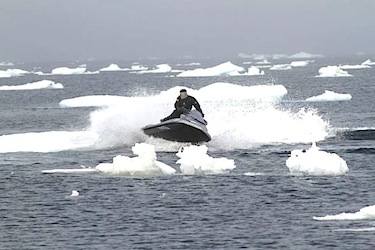 The passengers on the Fortrus played at jet-skiing in the Northwest Passage, which not that long ago was a challenge for ships and their skilled pilots to transit. (PHOTO FROM FORTRUS.COM)

CAMBRIDGE BAY — It’s not just narwhals and killer whales that are now drawn to warmer waters of Cambridge Bay in western Nunavut.

After jet-skiing on the ice in the Northwest Passage, a boatload of Australian party-makers arrived in Cambridge Bay early in September on the Fortrus, a 34-metre luxury yacht from Australia, which sleeps 12 in cabins with ensuite bathrooms and entertainment systems.

That resulted in police seizing 200 bottles of alcohol and $15,000 worth of illegal fireworks Sept. 7 from the Fortrus.

On board the yacht they nabbed dozens of bottles of wine, hard liquor and even top-of-the-line champagne, along with fireworks from the United States that aren’t allowed in Canada.

The owner of the yacht, Paul McDonald, 51, of Noosaville, Australia, now faces two liquor act charges: one count of providing liquor to a minor and one count of being in unauthorized possession of liquor.

But that’s just the bare bones of a sordid story whose details continue to circulate around Cambridge Bay.

These include mounting community concern after an underage girl from Cambridge Bay dived off the side of the yacht during a wild party where men overwhelmingly outnumbered women.

Locals also say that, after being told by RCMP not to set off fireworks, the Aussies on board ignored the warning.

And that’s not all. The passengers from the Fortrus also appeared to have harassed muskox on nearby Mt. Pelly.

“We wrangled them up and brought them back to the rest of the group,” says their website.

“Steve got some amazing video of the herd running strait [sic] down at him. The muskox were tired by the time we got them back to the group. We were able to get some great pictures right up close to the animals. Amazing…”

The yacht left the day after everyone on board was detained on the liquor act offenses and lost their stock of alcohol.

From the Fortrus passengers’ perspective, despite the seizures, which were not mentioned on the website, “the people of Cambridge Bay have been very helpful and Fortrus is now fully provisioned for the next leg of it’s journey. We tried to fuel while we were here but due to ice the town’s delivery of winter fuel is late and they can’t afford to deplete their supplies any more.”

As the yacht headed to Tuktoyaktok, they were overheard asking by radio if anyone with a float plane would be willing to bring them a new supply of alcohol.

McDonald, who recently made a deal to sell one of his companies on Australia’s Sunshine Coast for $81.5 million, is scheduled to appear before a justice of the peace in Cambridge Bay Nov. 15. He has until then to pay two $5,000 fines. A cheque for $10,000 left with the hamlet bounced [note: this incorrect information was clarified only on Oct. 3, when the hamlet’s Senior Administrative Officer Stephen King said “there was no cheque that bounced. I can also confirm that the fines have not been paid as of today. Paul McDonald has all the information he requires to wire transfer the $10,000. They had said they were going to make a payment via wire the day they left Cambridge Bay but that hasn’t happened.”]

If he doesn’t return to Cambridge Bay, an arrest warrant will be issued, says RCMP Sgt. Kristine Wood.

Because the offenses are summary offenses, any outstanding fines are unlikely to prevent McDonald from coming back to Canada. However, giving alcohol to minors is “a serious matter” for the police and people in Cambridge Bay, said Sgt. Wood.

It’s not the first time Cambridge Bay has received visitors off ships who have behaved badly.

The Berserk II, decorated with painted shark’s teeth and real caribou antlers, whose “Wild Vikings” carried on in Gjoa Haven in August 2007, then tried to hide two illegal crew members before arriving in Cambridge Bay.

On their website, they declared their wish to “turn the time back to the old days when men were men,” and “pick up the old Norsemen traditions opposed to today’s so-called ‘civilized’ and artificial way of living.”

“After playing hide and seek with Canadian RCMP and coastguard in Nunavut for 10 days, the entire Berserk crew was finally arrested and deported out of Cambridge Bay. It was the Canadian’s “prize” and reward for completing the Northwest Passage and setting the world record for sailing furthermost North to the Otto Sverdrup Islands,” they noted on their website.

The RCMP recently produced a bilingual sheet asking people in Nunavut communities to report any “groups or individuals who appear out of place,” and to remain on the lookout for unusual activities, such as ships without navigation or running lights or ships that follow an unusual route.

Wood said, apart from the Fortrus, crew and passengers on board other sailboats, yachts and cruise ships observed all laws, such as registering their presence with Canadian authorities or with the Cambridge Bay detachment, when it was their first Canadian port call.

In contrast to the Fortrus was the Octopus, a $200-million yacht from Seattle, Washington owned by the co-founder of Microsoft, Paul Allen, which spent the weekend in Cambridge Bay earlier this month.

At 126-metres, the ninth largest yacht in the world includes two helipads, a pool on one of the upper decks, a basketball court and two submarines.

The yacht entered the Northwest Passage from the eastern entrance near Pond Inlet and, over the weekend of Sept. 21, anchored off Cambridge Bay, with more than 50 crew members and a couple of dozen passengers.

These included Allen’s sister, her friends, and Canadian writer John Geiger, the author of “Frozen in time” on the ill-fated 1845-46 Franklin expedition — on board just in case Parks Canada’s search for the lost Terror and Erebus ships was successful.

The passengers from the Octopus asked local cruise organizer Vicki Aitaok for a cultural presentation along with a lunch of local foods.

At that event, they tried their hand at drumming and throat singing. They also shopped around town, spending thousands of dollars at local stores and the Kitikmeot Heritage Society. 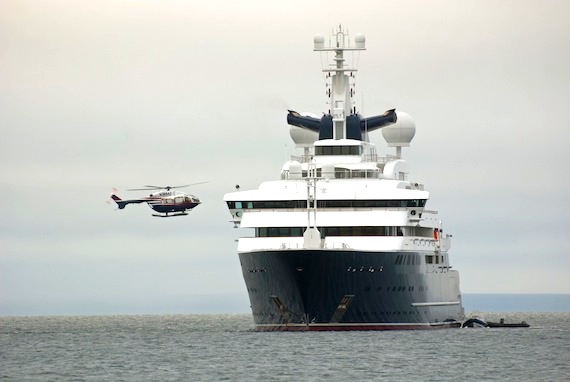 Passengers from the plush yacht, the Octopus, sampled Cambridge Bay’s culture, food and scenery while in the community in mid-September. (PHOTO BY DENISE LEBLEU)