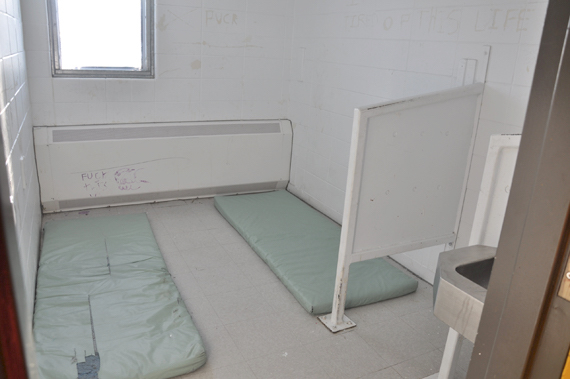 Here’s what a holding cell in the Kuujjuaq police station looks like. In Puvirnituq, investigators with the Quebec ombudsman found seven women held in a cell in the too-small police station there, which was opened in the early 2000s. (FILE PHOTO) 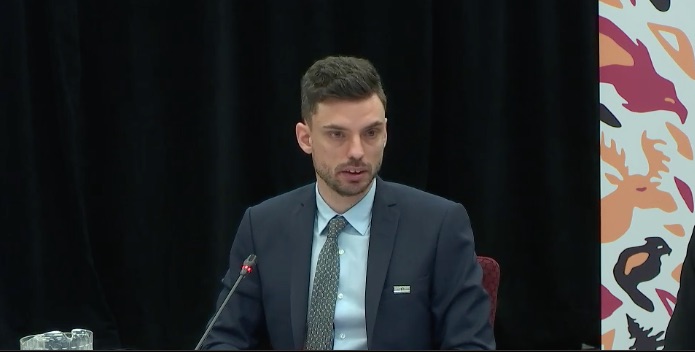 If you want to use the toilet reserved for detainees in the Puvirnituq police station, someone is likely to be watching you.

These cameras remain in place despite a call made two years ago by the Quebec ombudsman for changes to the angle of cameras so that the toilets could not be viewed on screen.

“The images from these cameras are transmitted to the police officers. Correctional officers also have access to the screens on which the images are shown. Despite there being a small wall in front of the sanitation facilities, the camera angle provides a very clear view of inmates relieving themselves, which is in violation of their dignity,” the ombudsman’s 2016 report on an investigation into the substandard detention conditions for inmates in Nunavik.

The lack of action on these cameras was among testimony heard Wednesday at a Montreal hearing of the Viens commission, which is looking at Quebec’s 15-year track-record in providing health, social services, correctional services, justice, youth protection and policing to Indigenous Quebecers.

At the hearing, officials with Quebec’s ombudsman, which acts to ensure that the rights of all inmates under Quebec are upheld, reviewed some of the 30 recommendations for improvements it had delivered in its 2016 report on detention conditions, administration of justice and crime prevention in Nunavik.

A big one remains unmet: that for a larger police station in Puvirnituq, the Hudson Bay’s hub for judicial services, which now has only six holding cells—one of which held seven women on mattresses when the ombudsman’s team went to Nunavik in 2015.

The construction of a new $17-million police station to replace the existing one is unlikely to move ahead before 2020, despite a commitment from Quebec to build a new police station.

Another yet-to-be-realized recommendation involves establishing direct flights from Nunavik to the new correctional facility in Amos.

That’s where Robin Aubut-Fréchette, the deputy ombudsman, said all Inuit inmates could be housed, instead of being spread out among provincial jails throughout Quebec where they encounter problems with language, among other challenges.

And, as it stands now, it’s an “exhausting voyage” south, mainly on charters, and getting rid of these costly flights could also help save some money, he said. The ombudsman’s report pegged the total cost of a single travelling court session in Nunavik at $2.8 million.

For its investigation into the detention conditions for inmates in Nunavik, investigators visited three villages—Puvirnituq, Akulivik and Kuujjuaq—in April 2015.

On a recent return visit, they found torn mattresses in Puvnirnituq, where the conditions in general were highlighted on Wednesday as “deplorable.”

And, at Kuujjuaq’s police station, which is better equipped than Puvirnituq’s, detainees are still not let out for exercise as they should be, for an hour a day, as the ombudsman had requested in 2016.

“The yard is still not used,” Aubut-Fréchette said.

Nunavik doesn’t have a correctional facility, choosing instead to invest money earmarked for a jail into Ungaluk, a crime prevention program that has put roughly $10 million a year to wellness activities.

Some things have improved over the past two years: in one southern Quebec jail, where Inuit women weren’t allowed to work in the laundry because they didn’t speak French, now they can, Aubut-Fréchette said.

And water deliveries to the police station in Puvirnituq now occur more regularly. One female inmate reported that in 2015, she went four days without showering due to water shortages affecting the facility’s hygiene facilities.

Asked if other Indigenous peoples had made complaints about corrections, Aubut-Fréchette said the ombudsman’s office rarely gets complaints from Indigenous groups, other than Inuit.

In Nunavik, the office has asked for its number to be clearly visible on phones in jails and police stations.

Correctional issues are important to many in Nunavik. The ombudsman’s 2016 report revealed that the annual number of Inuit admitted into the province’s correctional facilities stands at about 900 per year.

And the average stay for Inuit awaiting trial is 17.6 days longer than for the rest of the inmate population in Quebec.

A suggestion that a liaison for the ombudsman’s office in Nunavik might be a good idea for the region was well received by Commissioner Jacques Viens.

He said he was “ready to buy into that.”

This November, Viens, a former Quebec judge, will produce recommendations on how improve services in Nunavik and other Indigenous communities.

On Monday, he heard that building more housing in Nunavik would help improve the conditions for children and youth.

The commission hearings continue this week and next, and you can follow the open proceedings online on the commission’s website or check the schedule of witnesses.