“After that, our lives were changed,” witness tells Viens commission 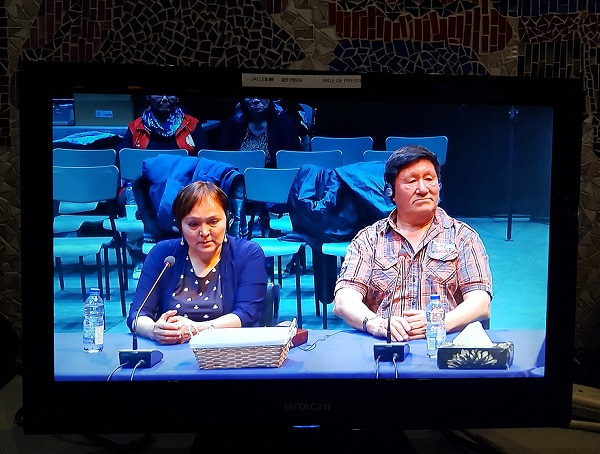 Charlie Arngak of Kangiqsujuaq, at right, testifies in front of the Viens commission accompanied by his sister Mary Arngak, in this image televised outside the hearing room Nov. 22. (PHOTO BY SARAH ROGERS)

KUUJJUAQ—The goal of Quebec’s Viens commission has been to look at how some government programs have served—or failed to serve—the province’s Indigenous peoples.

But, sometimes, stories told at those hearings refer to government programs and workers now long gone.

That was that case in Kuujjuaq this week, where Charlie Arngak testified on Thursday, Nov. 22, about his family’s relocation from their traditional camp along Ungava Bay in 1953.

His father died while Arngak was a young boy, leaving his mother alone to raise him and his siblings. They lived in a camp with relatives, who helped support his family.

Arngak remembers being approached by government workers as a child and told his family must relocate to a settlement up the coast, so he and his siblings could attend school.

That was the only way the family would continue to receive a government allowance, they were told.

“One day we were happy, we were very close and sharing food,” Arngak told the hearings.

“The next day, we were in a new place. It was like a whole new world.”

The new settlement was on Wakeham Bay, a community known today as Kangiqsujuaq.

Arngak recalls his first days of school. He said he feared his teacher, a white man who did not speak Inuktitut.

He and his cousin ran away, until Arngak’s teacher visited his mother and told her the government stipend would stop unless he returned to class.

“So I had to go,” Arngak said. “We needed to have money to survive if we wanted to eat.”

Arngak said those first years of school marked a dark time in his life, where he was scolded for speaking his own language. That was the first time he remembers being mistreated.

“They would slap my hand with a ruler,” Arngak said. “They made me stand in a corner, and sometimes I would pee my pants. They used to make me stay after school and write 200 lines saying I was a good boy.”

Years later, Arngak said he appreciated some of the schooling he received, when it allowed him to get part-time work as an interpreter.

As a teen, Arngak left school to go and work at the Asbestos Hill mine, known as Putuniq in Inuttitut.

“After that, our lives were changed”

Arngak shared another memory, as a child, of lying on the roof of a house with his cousin, watching police officers bring Inuit sled dogs to the shore of Wakeham Bay. He then watched his uncles bring their own dogs to the shore.

The dogs were all shot and killed.

“We could see that their faces were drawn and down,” he recalled. “We were afraid of the police so we were hiding from them on the roof.”

Later, Arngak went down to the shore to find a pile of the dead animals, which he said police burned that evening.

The killing of sled dogs across Nunavik in the 1950s and 1960s by government workers, and its impact on Inuit culture, has been well-documented, and led to the Quebec government’s $3 million pay-out to Makivik Corp. in 2011.

“After that, our lives were changed,” Arngak said. “We couldn’t go hunting; we had no skidoos. It was a very sad time.”

Arngak said the dog killings also coincided with the period that alcohol was introduced to communities in Nunavik, which created addiction and violence that Inuit had never seen before.

Arngak went on to work as a special constable—work he disliked but felt obliged to do.

He served as mayor of Kangiqsujuaq for a total of 16 years, a job he compared to being a social worker, as it brought him in touch with the needs of many community members.

The hardest request Arngak said he ever had as mayor was when a parent whose children were being taken away by youth protection workers, asked him to get them back.

“My heart hurts for the children that are being taken away,” he told the hearings. “They are going south and being given to white parents.”

Community officials in Kangiqsujuaq are working to open a family house, modelled after Qarmaapik in Kangiqsualujjuaq, to house children and families in crisis, which aims to open next year.