Royals stop for tea and bannock in Nunavut 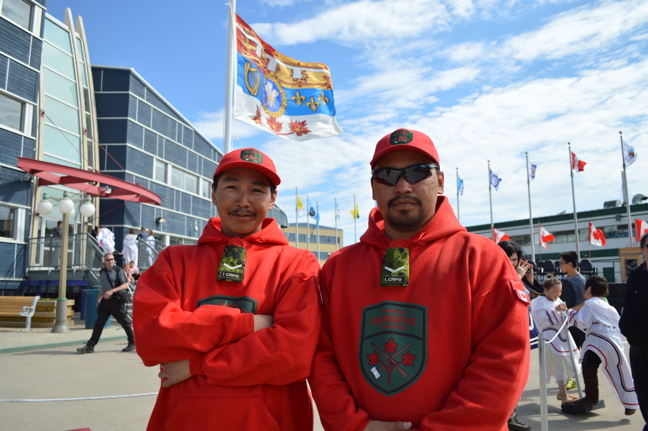 Canadian Ranger Jamie Kautuq from Clyde River, right, was one of a half-guard of Rangers inspected by Prince Charles during his Iqaluit visit June 29. 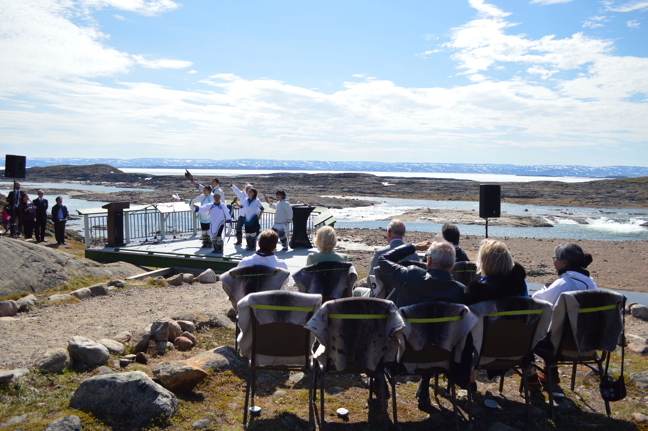 Against a backdrop of the expansive and photogenic Sylvia Grinnell River, some cast members from Qaggiavuut’s new production of “Kiviuq Returns” perform for Prince Charles, Camilla along with Governor General David Johnston and other dignitaries during their Iqaluit visit June 29. 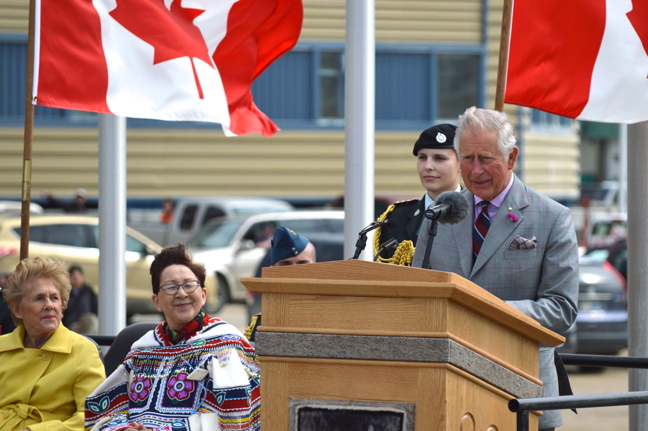 Charles, Prince of Wales, greeted Iqalungmiut with “Quviasuttunga iqalunnuurama,” in a speech at Nunavut’s legislative assembly in Iqaluit June 29. The Prince and Camilla, Duchess of Cornwall, spent about three hours in Iqaluit before heading to Ontario for Canada’s 150th birthday celebration. (PHOTOS BY STEVE DUCHARME)

The weather couldn’t have been better as the royal family, Charles, Prince of Wales, and Camilla, Duchess of Cornwall, descended on Iqaluit for the first stage of the Prince’s 18th visit to Canada, June 29.

“Quviasuttunga Iqalunnuurama,” Charles said in Inuktitut, during a speech outside the Nunavut Legislative Assembly.

That translates roughly to “I’m happy to be here in Iqaluit.”

“Arriving here today brings back the happiest of memories, chiefly because this is where I began my first visit to this great country almost 50 years ago,” he said to the roughly 300 Iqalungmiut crowding the legislature’s parking lot.

“I have never forgotten the warmth of the welcome from the Inuit people, which made me feel instantly at home, as indeed I have with all Canadians on my subsequent visits.”

Many more were on hand to greet the Prince on his arrival from Britain and as he delivered his first speech on Canadian soil this tour including Canada’s Governor General, David Johnston, Nunavut Premier Peter Taptuna and Carolyn Bennett, the minister of Indigenous and Northern Affairs Canada.

Bennett and Johnston used the occasion—a few days prior to July 1, Canada’s 150th anniversary of Confederation—to both reflect on the past but also suggest that times are changing.

“The next 150 years will be based on a new relationship,” Bennett told the crowd, referring to her government’s reconciliation efforts with Indigenous groups.

“We will rebuild the trust, the hope and the optimism.”

Canada has “much work to do,” Johnston also said, to become “the country we desire to build.”

The Governor General accidently flubbed the opening lines of his speech, referring to Nunavut as Nunavik.

But that was perhaps forgivable—as dignitaries, politicians and a plane-load of British reporters followed in the royals’ wake, Iqaluit seemed to struggle under the weight of logistical demands and security measures.

Bus service to and from Sylvia Grinnell Territorial Park—where the Prince spent about an hour attending a public feast—were fraught with delays.

And, much to the frustration of many Iqalungmiut, road closures to protect the royal motorcade shut down much of Iqaluit’s downtown core over the lunch hour as the Prince and Duchess held multiple engagements around the area.

But many thought the inconveniences were a small price to pay for a royal experience.

Eric Caouette, who was visiting Iqaluit from Val D’Dor, Quebec, to see his daughter’s graduation, but decided to stay in town a little longer.

“We were supposed to leave a few days earlier, but when we found out that Prince Charles was coming, we changed our tickets,” he said.

Jamie Kautuq from Clyde River was one of a half-guard of Canadian Rangers inspected by Charles shortly after the Prince arrived.

“I was just thinking what to say, and that’s about it,” he said, about his royal encounter.

Kautaq and the rest of the Rangers only had a few days to practice their rifle routine ahead of the royal inspection.

They were nervous, but Kautaq said they performed “better than expected.”

“We learned quick, that was good,” he said.

Charles received a brief lesson in Inuktitut, and learned about language revitalization programs from students of the Pirurvik Centre.

He also visited the Nunavut Research Institute, where he learned about projects to measure sea ice levels as the Arctic climate changes, a topic he mentioned during his address at Nunavut’s legislature.

The Northwest Passage, he said, “is becoming a deeply worrying reality as the results of human activity warm even this remote ocean.”

“This same warming is, tragically, bringing rapid and damaging changes to the Arctic way of life that has sustained the lives of the Inuit.”

Camilla, during her own separate engagements, focused her visits on “women and wellness,” meeting with local elders, along with members of the city’s food centre, Inclusion Café, women’s shelter, tattoo revitalization experts and Karen Kabloona, Nunavut’s deputy minister for the Quality of Life Secretariat.

Kabloona, who is charged with coordinating Nunavut’s suicide prevention council, Embrace Life, told press pool reporters that the topic was “a hard story to tell in three minutes.”

The royals will continue their three-day tour, June 30, in Trenton and Wellington, Ont., before heading to Ottawa and the national capital region, July 1, for Canada Day festivities, where the Prince is expected to deliver another address.

You can find a photo album of the day’s events on our Facebook page.