This chart, copied from the Senate committee report Powering Canada’s Territories, shows the estimated life expectancy for Nunavut’s fleet of power plants. In 14 communities, the estimated life expectancy is zero. (The date for Qikiqtarjuaq should be 1963. The typo is embedded in a graphic file extracted from the report and cannot be corrected.) (SOURCE: SENATE ENERGY COMMITTEE) 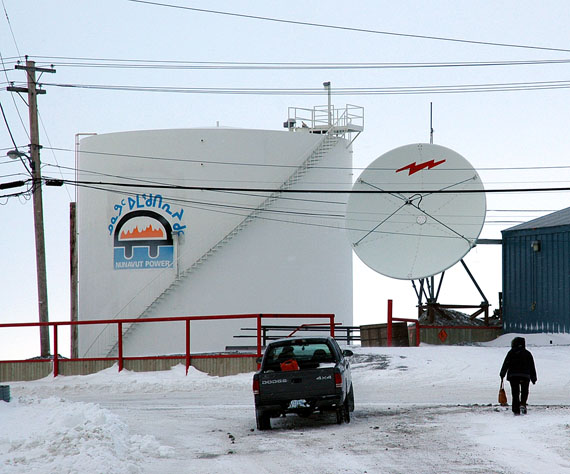 The Rankin Inlet power plant, in an undated file photo, from when the QEC was still called the “Nunavut Power Corporation.” This plant dates to 1973. (FILE PHOTO)

Nunavut’s electrical power system is “unsustainable” and to fix it, the federal government must share the burden of replacing Nunavut’s aging fleet of power plants, the Senate standing committee on energy, environment and natural resources said June 17 in a report.

“The committee was surprised to learn 17 of the 25 existing diesel facilities operating in Nunavut are operating beyond their design parameters. These aging facilities increase the risk of power outages posing a risk to public safety and resulting in costly repairs,” the committee report said.

That’s from the committee’s latest report, entitled Powering Canada’s Territories, which takes a look at electrical power generation in the three northern territories.

After holding 18 hearings, listening to 42 witnesses and making visits to the three territorial capitals and smaller communities like Rankin Inlet and Kimmirut, what they learned about Nunavut is alarming, to say the least.

For example, a chart printed within the report shows that in 14 Nunavut communities, their badly aging power plants have an estimated life expectancy of zero years.

The plant in Chesterfield Inlet, built in 1975, has a life expectancy of only one year and the Gjoa Haven power plant, built in 1977, only three years.

“Acquiring parts for these plants is a constant challenge. An aging facility increases the risk of power outages and, if a winter outage occurs, extensive damage can result due to freezing,” the report said.

They also point to the recent fire at Pangnirtung’s 45-year-old power plant, which led to a month-long state of emergency.

Citing information received from the Qulliq Energy Corp. they say the cost of hiring specialized Russian aircraft — a huge cargo aircraft and a 70-foot-long twin-engined helicopter — came to roughly $3 million.

And that doesn’t include the cost of the four generators, the committee report said.

“The committee holds the view that replacing existing generator systems with newer systems will allow more effective and efficient operation of the plant facilities avoiding costly and disruptive outages,” they said.

On the other hand, the Iqaluit plant, where the QEC recently spent about $40 million worth on upgrades to the plant and to the city’s transmission system, now has a life expectancy of 40 years.

They also point out that diesel generating sets located inside old plants may be newer than the actual buildings, and may not have reached the end of their life cycles yet.

In the past, QEC officials said that after the creation of Nunavut in 1999, the corporation had to stuff more generating sets into plants in the 10 decentralized communities to accommodate the extra demand for power created by new government buildings and staff housing.

To fix this, the committee said the federal government should recognize its “legacy responsibility” for replacing the power plants they built in the 1960s and 1970s.

That’s because the Northern Canada Power Commission, a federal Crown corporation, built, owned and operated nearly all the diesel-powered generating plants that exist today in Nunavut and the Northwest Territories.

But in the 1980s, these were devolved to territorial governments, where they are now run by the three territorial power corporations.

Because of that, the committee said there is a shared responsibility between the federal and territorial governments to fix or replace these aging plants.

The committee admits that small off-road communities in the three territories will be dependent on diesel generated power for years to come.

And they found that renewable sources of energy like wind and solar are capable of supplementing diesel plants, but not replacing them.

But they also said the territories need federal help to modernize their diesel plants and make them more efficient.

As for hydroelectricity, the committee learned what the Nunavut government knows already: that the territory’s tiny rate base makes it difficult to borrow money to finance big projects that can run into the hundreds of millions of dollars in capital costs.

The QEC admitted to them that they can’t afford to even pay for the feasibility studies required for its mothballed Iqaluit hydroelectric proposal.

“The committee was told the Iqaluit hydro project required $6 million in further feasibility studies and that the Government of Nunavut decided to postpone the project and instead focus its limited resources on replacing, upgrading and maintaining existing diesel generation across the territory,” the report said.

They committee did recommend the federal government look at providing loan guarantees, similar to one they provided for the Lower Churchill project in Labrador in 2011.

But they also said “federal loan guarantees must ultimately have financial merit and be paid by ratepayers.”

And they recommended the creation of a one-stop federal hub for programs related to energy, which are now scattered among 10 different federal departments and agencies, and the provision of funds for territorial projects that improve energy efficiency.

They also decried the lack of transparency on energy costs in Nunavut, where few people understand the real cost of generating electrical power in the territory.

That’s because of various subsidies that hide the real cost of power from consumers.

“For those in social housing, there appears to be no meaningful pricing or financial incentive to encourage energy efficiency and conservation behaviour,” the committee said.