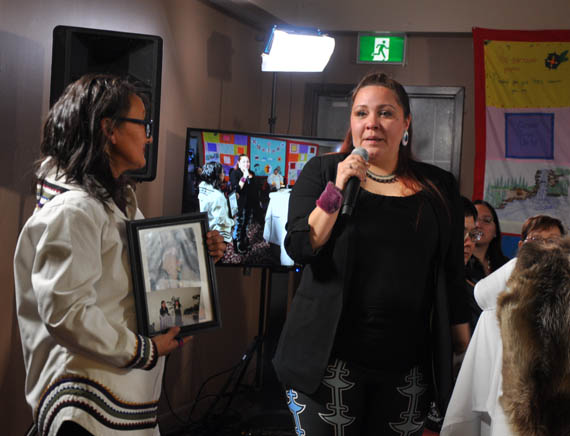 Nikki Komaksiutiksak speaks at the opening ceremony of the MMIWG hearings in Rankin Inlet. She testified before the commission Feb. 20 on the death of her cousin, Jessica Michaels, who died in Winnipeg in 2001 at age 17. (PHOTO BY SARAH ROGERS) 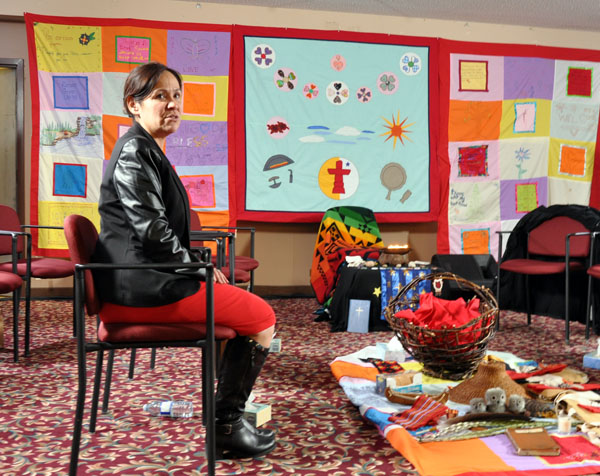 Laura Mackenzie testified before the National Inquiry into Missing and Murdered Indigenous Women and Girls Feb. 20 about the childhood abuse her aunt Betsy Kalaserk faced, and how she believes it led to the woman’s 2003 death. (PHOTO BY SARAH ROGERS) 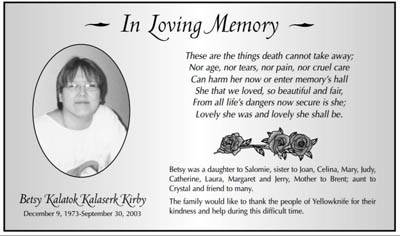 An obituary for Betsy Kalaserk, who died in September 2003. The Rankin Inlet woman’s story was the first to be told as MMIWG hearings began in Rankin Inlet Feb. 20.

Warning: Some readers may be disturbed by details in this story.

And that abuse will continue to slowly kill many until Nunavummiut decide to speak up against it and seek help, said Kalaserk’s niece, Laura Mackenzie.

Mackenzie, who spearheaded the effort to bring the inquiry to her hometown of Rankin Inlet, was the first to testify at its community hearing, which began on Tuesday, Feb. 20 in the Kivalliq community.

She shared with the commission the story of her aunt, Kalaserk, who she described as a kind-hearted woman with many friends, and who loved and protected all the children she knew.

But Kalaserk didn’t enjoy that same protection as a child growing up in Rankin Inlet. She was the victim of childhood sexual abuse by a family member—a trauma she never recovered from, Mackenzie told commissioners.

“She couldn’t overcome the sexual abuse she had encountered for many years, and no one seemed to want to help,” she said.

“The family and community—maybe in shame—would not speak about or report the abuse.”

Kalaserk moved to Yellowknife in her twenties to forge a new life; she married and had children. She sought counselling, but drank to cope with her pain, Mackenzie said.

On September 30, 2003, Kalaserk attempted suicide at home, while her husband watched. Ian Adam Kirby was later convicted of criminal negligence causing her death.

Mackenzie can’t reconcile with the two-year sentence Kirby ended up serving, but she believes the real killer was trauma.

“The sexual abuse made her take her own life,” she told the commission.

“She mattered to me. She could have lived and had a life, if only she wasn’t abused… and the community hadn’t turned a blind eye to the things that happened to her,” she said.

“Those are the things that don’t let me sleep at night. What if?”

Mackenzie used her testimony to call on Nunavut parents, leaders, organizations and church groups to speak up and speak out when they know of abuse—sexual or otherwise.

She encouraged Nunavut voters to elect leaders who are role models. “We have to stop electing them if we know they beat their wives,” she said.

Mackenzie also called on the territory to hire more therapists and psychologists who specialize in childhood abuse and trauma to help assess and treat young victims, “and it can’t be one per region.”

And finally, she called for an independent body to be created with the release of the inquiry’s final report, to help guide and ensure that its recommendations are implemented.

“Behind closed doors, it was frigging horrible”

Nikki Komaksiutiksak returned to her childhood home of Rankin Inlet for the first time in 26 years to testify Feb. 20 on the death of her cousin, Jessica Michaels.

Michaels, originally from Chesterfield Inlet, died in Winnipeg in 2001 when she was just 17.

The girls spent a part of their childhood in the Kivalliq region, but spent most of their youth in Winnipeg, where they lived with their aunt Agatha.

Komaksiutiksak and Michaels became well-known throat singers, travelling around the world to perform, including at the 1996 Summer Olympics in Atlanta.

“But behind closed doors, it was frigging horrible,” Komaksiutiksak told commissioners in her highly charged testimony.

She gave disturbing examples of the type of abuse and torture—both sexual and physical—inflicted on the girls by their aunt, including whipping them with electrical cords and stabbing the girls with coat hangers.

When Komaksiutiksak ran away as a teenager, she was discovered by police, who tried to return her home until she showed them the marks on her body.

That launched an investigation into the abuse against her and Michaels, but the girl’s aunt only received two years probation.

“That broke her,” Komaksiutiksak said of her cousin.

The girls were moved into foster homes, but Michaels began working the streets and soon became addicted to crack. Komaksiutiksak said they drifted apart for a time.

At age 17, Michaels reconnected with Komaksiutiksak—then a teen mom—and told her cousin she wanted help to get clean. Michaels feared the drug ring she was involved in, because she said its members had killed friends of hers.

On August 26, 2001, Komaksiutiksak got a call from her foster parents that Michael’s body had been found. She was discovered in a rooming house, on her knees with a cord wrapped around her neck.

Michaels death was registered as a suicide. Komaksiutiksak doesn’t believe it was.

“A week before her death, she was making plans,” Komaksiutiksak told commissioners. “She wanted out of that life. That just doesn’t make sense.”

When it came time to fly Michaels’ body home to Nunavut, Komaksiutiksak said no organizations in Nunavut or in the South would pay for it—family and friends had to fundraise.

Michaels is now buried in her hometown of Chesterfield Inlet. A photo of her gravesite appeared on the screen at the Feb. 20 hearing, along with a photo of she and Komaksiutiksak as girls singing at a wedding.

“She gives me a voice to speak so that crap like this doesn’t happen to any other woman or girl,” Komaksiutiksak told the commission.

“There’s a lot of work to be done to make that happen. But I believe that telling her story is enough to come up with a lot of recommendations in every area.”