“We didn’t have anything to survive with anymore” 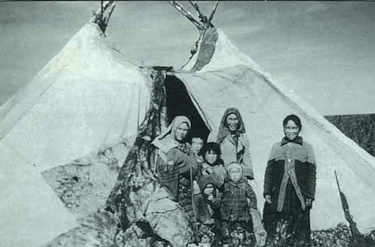 Women and children at Ennadai Lake, 1955. The three women (left to right) are Mary Anowtalik, Elizabeth Nutaraluk, and Ookanak.
The child on the right could be Tom Owlajoot. (PHOTO BY GEERT VAN STEENHOVEN)

By this time next year, those Ahiarmiut who survived the repeated relocations from Ennadai Lake, along with their many descendants in Nunavut, may see an official apology for the unbelievable hardship they suffered.

The final legal submission on the Ennadai Lake Society’s special claim against the federal government will be filed in June.

And if it’s accepted, they can look forward to receiving some form of compensation, an apology and other measures, such as a visit back to Ennadai Lake and plaques to remember the relocations and honour the relocatees.

“I want my clients to sit across the table from a senior minister or two to say ‘I am sorry, what we did to you was wrong.’ That’s the most important thing,” said lawyer Steve Cooper who is working to get the special claim accepted by the federal government.

The relocations to Nueltin Lake and Henik Lake both proved complete failures, says a paper called “Relocating the Ahiarmiut from Ennadai Lake to Arviat (1950-1958),” by Frédéric Laugrand, Jarich Oosten and David Serkoak, presented at the Inuit studies conference in 2006.

The Ahiarmiut maintained that Ennadai Lake was an excellent hunting area and failed to understand why they were relocated, the authors noted.

Elder Job Muqyunnik called the first relocation “the saddest time of my life.”

“It was around May in 1949. Qallunaat came to the weather station there at Ennadai Lake,” he said in 2005. “They had a large vehicle up there. This bulldozer came to our tent.

The driver told us to leave our tent so we went out. He went back to his vehicle and drove over our tent, back and forth. He broke everything we had. He drove over them and destroyed everything. That was the hardest time of my life because we didn’t have anything to survive with anymore.”

Mary Anautalik told how several elders died because of the cold.

These are dreadful memories, also discussed in books by Tammarniit (Mistakes): Inuit relocation in the Eastern Arctic 1939-63 by Frank Tester, in Farley Mowat’s fictionalized tales, People of the Deer and the Desperate People and the film, Kikkik.

The stories from Ennadai Lake’s relocates touch Cooper, who said “as child you’re either cold or hungry. As a parent you know you’re cold and hungry, but you also know that everyone is depending on you, and they felt entirely powerless.”

The process of litigation started about 15 years ago, gaining moment with David Serkoak’s founding of the Ennadai Lake Society.

Then, in 2006-07 Cooper became involved in the case, which was initially refused, then accepted, as a special claim.

Most recently Cooper has been in a back and forth the federal government’s special claims unit.

Cooper and three other lawyers in his firm are working on the final legal submissions to the Department of Aboriginal Affairs and Northern Development which must be submitted by the end of June.

If accepted, the next steps will involve negotiations about what the claim will include.

Generally, the federal government “apologizes with a cheque and well-considered words,” Cooper said.

But Cooper said he rarely talks about money with members of the Ennadai Lake Society.

“Most say they want a memorial,” he said. “They want plaques at Ennadai and in Arviat, and they want a paid trip back to enjoy their former home at Ennadai Lake.”

Money is an issue, Cooper said, but it’s not paramount.

The federal government can still decide to reject the special claim, he said.

The biggest regret of all those involved in the special claim: that only two of those who were adults at the time of the relocations are still alive today.